By Jeff March 31, 2020
Greetings fellow plague-sheltering nerds. We have been training for these days all our lives. Those others merely adopted social isolation, we were born to it... Ahem. Sorry, different meeting.

In what feels like another eternity we had the first bouts of the Border Princes campaign. As part of that we had a serious week of painting where I went... a bit mad. Sadly I was at that time car-less so left all my cases at Charlie's to avoid carrying them on the train again (thanks Charlie!). Having been recently reunited with them I can finally, finally photograph the fruits of my stunty labours:


And we start with one of the lovliest units in all Dwarf-kind. The Ironbreakers. They're not terribly special on their own, but those shields. Oh Grugni, those shields. They are a collossal pain in the ass to paint, especially white. But lordy lord they are so, so lovely. 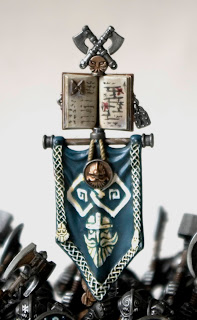 Regarding the inexplicable book on the banner - which has the Ironbreaker rune at it's heart: I decided that it was a record book of all the underground workings in Karak Hoch. That way the Ironbreakers always know where they are. They're responsible for defending the Underway after all.

Commanding the underground defences is this nutter. Taurun Firetongue is a thane with a very, very hot hammer. Sporting two runes of fire on his ever-hot weapon, Taurun can breath fire as though a dragon. Very, very handy in close confines. I was inspired by Dwalin's head tattoos in the Hobbit to get a bit excited on baldy Taurun's scalp.

Backing up the Ironbreakers are the alchemical fury of the Irondrakes. Though they are my least favourite Dwarf unit from an aesthetic standpoint; I love having S5 missile weapons. I minimised a lot of elements with the painting to calm down the more World of Warcraft elements (these were kinda the start of the Age of Sigmar aesthetics) and used a ton of weathering to give the drakeguns a realistic feeling. 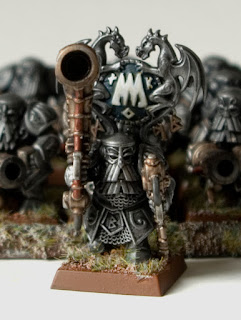 I also combined the standard bearer and musician in one model and buried him back in the unit as he's the silliest element of a slightly silly unit.

Joining the Thane-train (there's another one coming) is Aldebard Kragmantle, Warden of Kazad Urkbavak in the Border Princes. He's my Oathstone Thane and wanted to make that Oathstone all kinds of blingy. So I went with dark green marble. The massive wings on the model needed some minimisation and I ended up going with giant owl wings. The subdued pallete combined with the complex patterning really made them look nice without standing out too much. 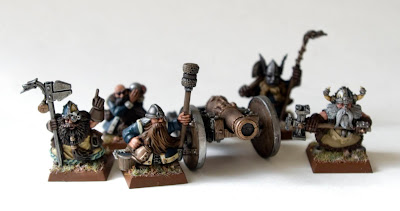 Knowing that there was some Big Stuff (TM) among my opponents in the Border Princes I painted my second cannon. I also painted a couple more of Hwell's apprentices as extra Engineers for variety. 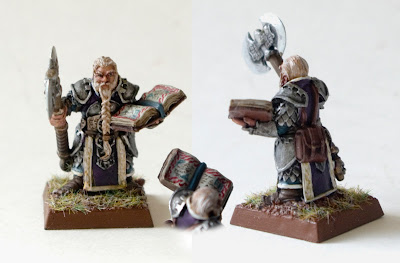 This fine fellow is a counts-as Runesmith made by Reaper and with a bit of conversion inserted into the army. He's actually a priest called Kobin Godsmouth and creates the anti-magic and armour piercing effects through the intervention of Grimnir rather than runic magic. I might have gotten a bit excited on the book. 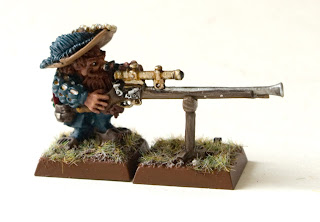 Finally, and because I hadn't gone mad enough I actually bought this guy during the painting week to have ANOTHER dwarf to paint, we have our last Thane for now: Dimak Stormborne. He's an Assault Group dwarf that I found looking for an appropriate chap to be a handgun Thane. Once I saw him I was in love. There was always a danger in coming to the Empire that some Dwarfs would go a bit native. Dimak is an extreme example of that. Sporting a dwarf-crafted copy of a Hochland Longrifle he provides ranged support to the army.

But that's not the problem and the reason that Dimak is called "The Worst Stormborne" by the rest. Just look at how he dresses. He's clearly gone wrong. He's even wearing a Hochland cape for the love of Shallaya! 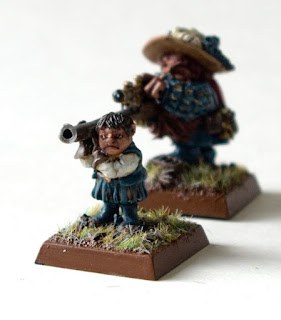 Worst of all he's corrupting his beardless nephew already. He even uses him as an "assistant" - read quickly repositioned gun-rest - when he can sneak him away from his mother.

And that's the lot! The results of a mad week of painting and 30 years of practice painting Dwarfs. I'm, ahem, not quite finished with the Dwarfs yet but the end is somehow in sight now. Until someone makes more pretty dwarfs. Yeah. I've got problems.

Until next time lovely people, stay safe and