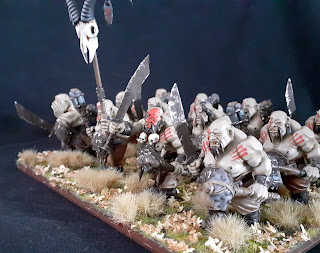 I've really been enjoying playing my Ogres recently. As you will know I have a rather large Undead collection: 5427 points according to my spreadsheet. This is by all measures my main army for WFB. However, the little Orge army that I started way way waaaaay back in 2014 (The Onefinger Tribe) has grown on me. It's also grown to a rather nice 2000 points with the addition of this lastest unit. A decent sized game of Fantasy is around the 2000 points mark, in my opinion. Enough units to give some tactical choices but not to big that it becomes exhausting. Anyway, I've kinda fallen for these big guys. I like they way they play, solid, reliable, and a not overwhelming set of special rules. It's also because of the sheer amount of charm I've managed to inject into them. You could argue you can give any warhammer unit character, and I would agree with you, but I've just seemed found something that sits well with me. 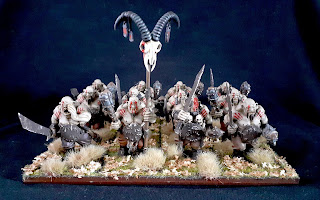 Maisey, don't you already have an excessively large unit of Bulls?! Why add more? Well, the list felt a little too top heavy. It needed some extra girth around the middle. I like collections that have a good solid core to them. Doesn't matter about which gaming system. Having too many special and little bitty bits in the army just leaves it feeling fragile. I could have gotten away with having the bare minimum of core and stuff the army full of special and rare choices but that doesn't feel right to me. It's like having too much sauce and not enough pasta. Having a couple of big units of Bulls just feels right. If that works out in game it yet to be seen. 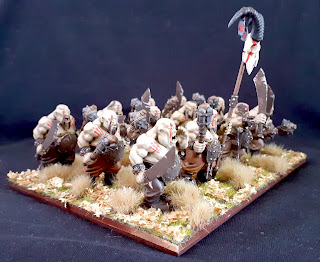 So who are these new Ogres then? Introducing The Lost Boys:

The Lost Boys where picked up whilst travelling through Talabecland. These are the survivors of a small tribe that the Onefingers encountered, defeated, and absorbed as they travelled south on their holidays. As the newcomers they are still treated somewhat suspiciously by the rest of the tribe. With the exception of Burping Rhone, who being the friendly sort has taken to trying to integrate the, what he called, the Lost Boys. A name they decided to keep as they couldn’t think of anything else. After their assimilation into the tribe the Lost Boys started to fight amongst themselves to establish the pecking order. An Ogre named Bozag came out on top. Bozag picked one of the less broken challengers, named Grizz, to carry his totem. This totem was hastily built from a couple of wooden posts and the rotting skull of a giant mountain goat taken from Comehere’s last curry night. The Lost Boys then had a yelling contest to pick their bellower. Ikig was deemed the winner, however he yelled so loud that it disturbed Little Karl, and Little Karl promptly smashed Ikig over the head with a cow. So the runner up, by the name of Toothrot took his place as bellower. 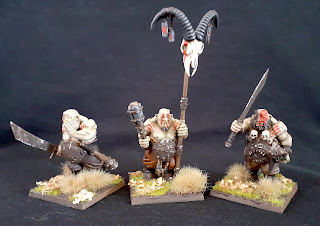 I've painted the skin in the same way as the rest of the army. As these guys were not part of the tribe up in Ostland then they haven't they haven't been given the Ostland state colours like Yarg's Raging Bulls. They have been done up in a far more tribal scheme, with a flash of red war paint to tie them in with the rest of the army. I will mention at this point I've done/I am doing a little refresh of the army. Yarg's Raging Bulls are remaining in the Ostland colours. The rest of the army is getting diversified into a much more ragtag, but still Empire centric, colour scheme. The sharp eye'd will notice a very different basing method compared to the others. I didn't really like they previous version and I'm in the process of updating the basing. Once it's done I'll share the whole tribe as it stands today. 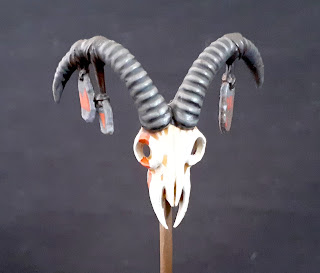 What's Next: An in progress BSB... more on him another time. 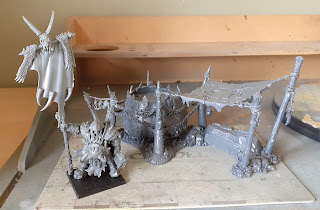