By Charlie May 06, 2012
In part one of this post, on the 26th of February, I wrote, "I'm going to go step-by-step through a work-in-progress, the second half of which I'll do in a fortnight's time."

Moving on... Hochlanders love the Imperial Cross, apparently, so I decided on that as the design for the flipside of the flag. Here we have the same drill as before: dots to map out the basic shape, then sketching the basic shape (using a layer paint rather than foundation paint – it’s just smoother and easier to sketch with). After that, flesh out the design and get the shape you want, like so: 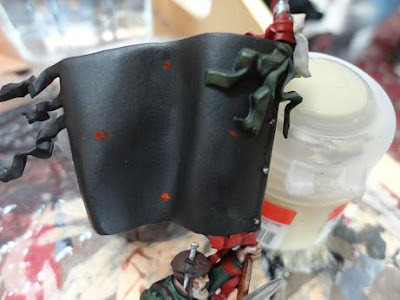 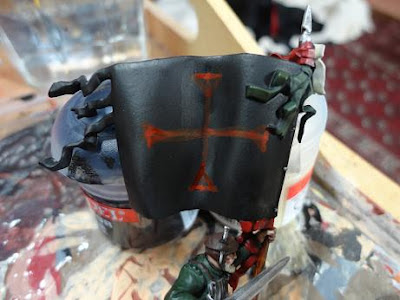 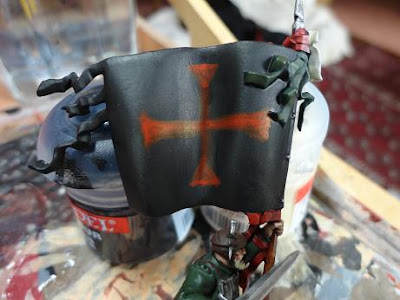 Once I was happy with the proportions, I then went over the design with a foundation paint, and then went over it again with a layer paint, for a stronger colour: 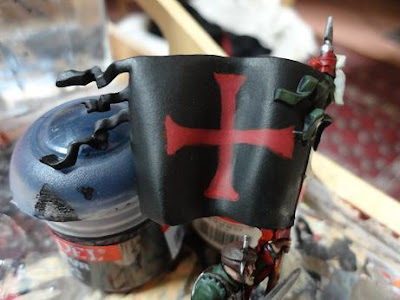 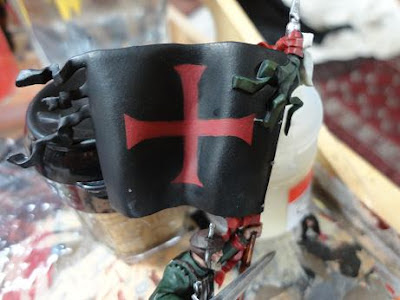 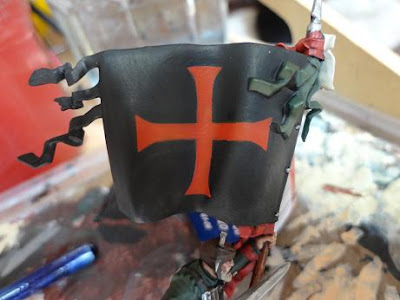 How did I get such a sharp shape on the ends of the cross? By using Chaos Black as an eraser.

Now, at this point, it became clear that a plain ol’ cross wasn’t going to cut it, given how much effort I’d put into the other side. After some discussion with Maisey, I decided on a laurel wreath (thanks babe).

So, with the cross basically done, the now-familiar process started again. Dots, sketch, firm up. 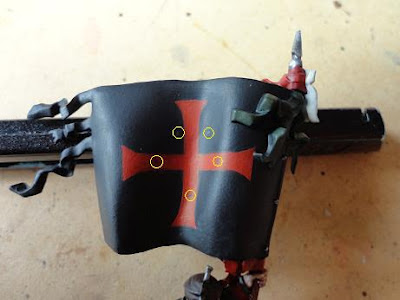 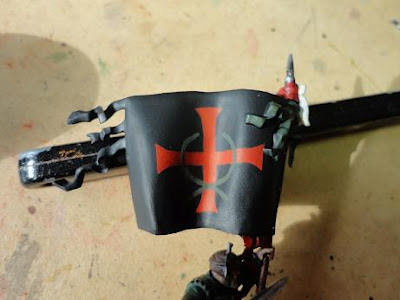 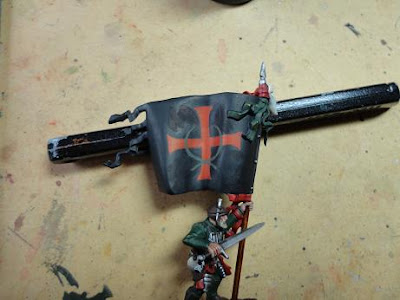 It should be noted that circular shapes can be a cast-iron muthahubbard to get right. If you need a decent circle, it’s often easier to draw an eight-pointed asterisk first (basically two crosses) and check that all the lines are the same length. After that, you just have to join up the dots, and then go back over it to paint it more like a curve than a series of straight lines. In this case, I was happy with just the four points, and drew it by doing four ninety-degree curves.

Unfortunately, I then realised I’d made the lines far too thick, and so got my Chaos Black eraser of love out again. I didn’t use any foundation paints for this one – with such a small surface area, I didn’t need it, and stuck to Catachan Green.  Witness, thinner lines: 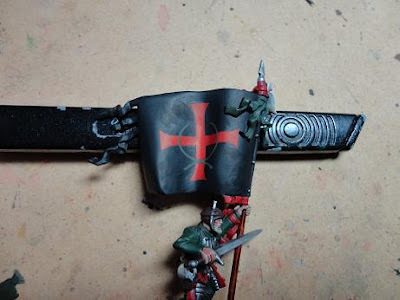 I now needed to sketch the leaves. To be honest, there’s no cunning trick here, but leaves are actually quite an easy shape to draw. Just look up some reference of laurel leaves (or iconographic versions of them in Uniforms & Heraldry of the Empire) and get involved.

To keep things stylistically consistent with the deer skull, I went for a more natural-looking wreath rather than a stylised one. To suggest some volume to the leaves, I painted the leaves by making two lines, leaving a slight gap between them to let the black show through. Obviously, that was never going to work on the leaves on top of the red bits, but whatever. Nothing can be perfect, lest it offend Allah’s sensibilities.* 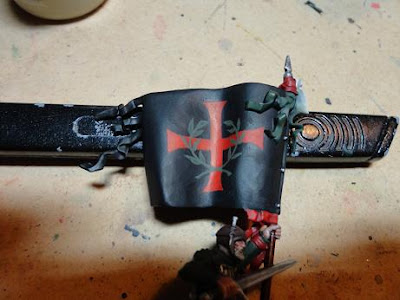 At this point, having basecoated all the shapes, I layered up the black of the flag with Graveyard Earth and Bleached Bone, gave the ribbons a quick highlight, and mixed some Bleached Bone into the Catachan Green for a highlight on the wreath. 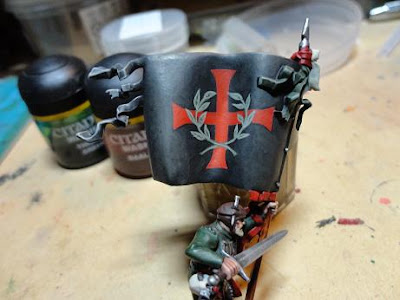 As I had some black highlight mix going, I also took the opportunity to tidy up the deer skull: 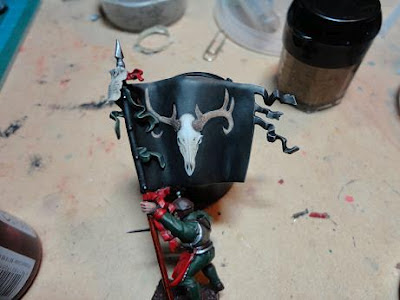 Feeling the wreath needed a little more colour, I glazed it with Thraka Green, applying more to the leaves than the stems (as per the reference photos I’d seen). 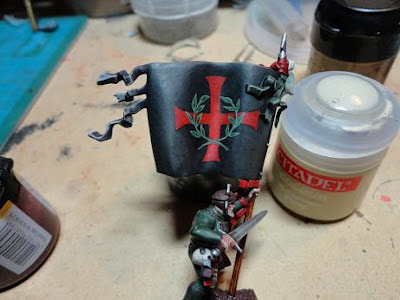 With the design finished, I gave the entire model (not to mention nine other state troops) my patented Filth Wash (it’s just Graveyard Earth and Scorched Brown watered down, but it makes things more dusty than a proper wash, which has a little varnish in it). 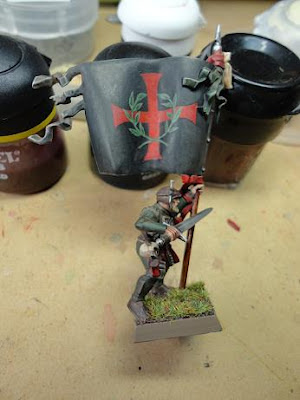 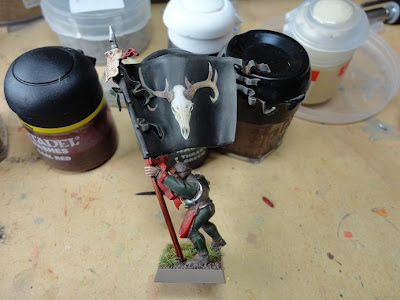 And there you have it. At long last, the Blades of Taal can be fielded in a game! That said, there’s only twenty of ’em. That won’t get me far in a fight against Emma’s Warriors of Angry. I reckon another ten. And a detachment might be necessary. I’ll totally have them done in a fortnight... I’m dependable like that.

* I'm told many Muslim carpet weavers make one deliberate mistake when they make a rug, because to make something perfect is to claim you’re on a par with God, which is - apparently - fairly presumptuous.