One story, many GMs

By Charlie May 08, 2013
How do you fix one silly idea? With another silly idea. It's like two wrongs actually making a right.

What am I talking about? Well, those of you who've been following our last few posts will know that we're planning a 28mm Inquisitor campaign, among other things. Jeff's idea was that each player would make a warband and a faction of antagonists. In creating their band of antagonists, each player would also write all the background for said nastygribbles, and if/when another player's Inquisitor (or Rogue Trader, or whatever) encountered said antagonists, the player who created them would GM the encounter. To keep it all tied together, everything would be set in the same patch of space, namely, the Cetus sub-sector: 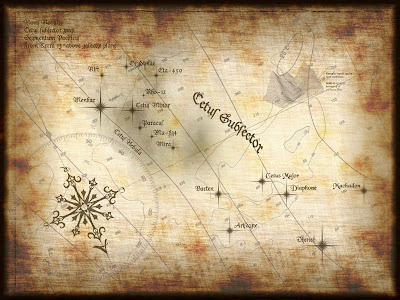 The challenge, however, was to create that sandbox without stepping on each other's toes, or writing mutually-exclusive background. There are, you know, reasons why campaigns usually just have the one GM. Surely, this would be an organisational quagmire? Enter our friend Tom, who pointed out that there was a way of having a communal e-space in which to collaborate: a wiki.

By Jove, the man's a genius! Wikis are easy to navigate and easy to write. It's early days yet; whilst we've got it online, it's mostly just stuff that's already been said on the blog, although I've enlarged upon Inquisitor Drake's background because self-indulgence isn't a sin no it isn't honest guv'nor.

There was another question: which rules to use? Warhammer 40k is a battle game, not a skirmish game, but the original Inquisitor - whilst delicious - can make a fight scene take hours. Then came the utterly preposterous solution: to write an entirely new game.

The good news is that this isn't actually as impossible as it could've been. The core game engine is pretty much done, and we've had a few playtests now. It's actually working, and surprisingly well at that. It's too early to go into any detail, but there's a possibility (and it's a long-term one) that the Beard Bunker may end up publishing a ruleset designed for 28mm skirmish games. Note the phrasing. 28mm skirmish games. Not just Inquisitor, but whatever setting you want, be it modern warfare, old west, fantasy or sci-fi. We're trying to make a simple, stripped-down game engine that just works. If there are any game designers among you, you may start laughing now, knowing as you do all the pitfalls we have ahead of us.

Also, lest ye had forgot, the Hochland campaign will carry on through the year whilst we paint up new shiny things. This last weekend, Mark and I had time for a game, and I'd forgotten just how hard the Ulriscberg Stonewalls are. Good lord. Just as I don't know what to do with Mark's 70-rat horde, he doesn't know what to do with my 35-man regiment of greatswords.

In story terms, my Empire army - bolstered with reinforcements from Middenland - went stomping off East in the hopes of finding Emma's Chaos Warriors and taking revenge on behalf of the Stormbournes. They then proceeded to spend a long summer month marching about the hills wondering where the fudge the northmen had gone. [subtext: Emma and I haven't managed to organise another game since campaign week despite living in the same house, because we are totally amazing like that.]

Meanwhile Voltik ran out of raw materials in Hergig, which was now seriously overpopulated with rats and seriously underpopulated with food. Keen to loot more precious metals, he led his army north out of the city, telling them that they were going on a quest for food so as to quell the growing unrest. Eichewaldchen looked like easy pickings, but as the Skaven scampered up to the village, the Empire army - still marching around looking for Norscans - marched straight into them.

At which point, violence.

Several angry greatswords and a keg of Sh!twhiskers' Special Brew later, there were a lot of dead bodies outside Eichewaldchen. The Skaven were beaten back, and safe in the knowledge that the Skaven would be licking their wounds for a while, the Empire took the opportunity to repopulate and fortify Vodf. Voltik, despite having suffered a military defeat, was quite happy: he might not have got more raw materials for his plan, but he'd solved the overpopulation problem...