Inq28: The Chronicles of Bastian Vandemar - Episode I

By Jeff May 10, 2013
Greetings bunker dwellers! Carrying on with the Inq28 excitement I've started writing the back story for my merry warband. Before long, I realised that what I really wanted was to pull an Abnett and write all of the back stories from the first-person perspective of Inquisitor Vandemar. So here I present episode I of the Chronicles of Bastian Vandemar where we meet our (well my) titular hero and see some of what makes him the man he is today. I'm keeping these to roughly a thousand words an episode so hopefully they shouldn't be too heavy a read! I'm also illustrating the stories with pictures of the models that represent the characters. Would love to know what people think so without any further ado, here we go:


My name is Inquisitor Bastian Sergeiovich Vandemar of the Ordos Hereticus. As I write this I am transferring my seal and oversight from Hydraphur and am moving into the Cetus subsector to aid in the Inquisitorial Scrutiny of that region. Until now I have not been concerned with making any chronological written record of my investigations and examinations. However, as I enter my 93rd year – though I look no older than my late forties – I find more and more that I mistrust the once inviolate fortress of my memory. Thus I begin this chronicle. 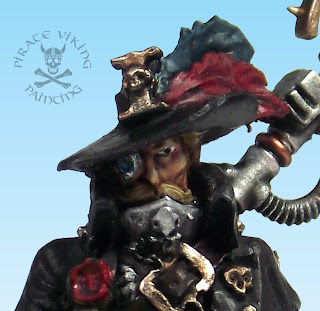 Some background perhaps. I do not recall the planet or even the sector of my birth. My earliest memory is of the crushing blankness of the Black Ships. I had been identified as a telepath long before I could walk. To my fortune I was appraised as of sufficient power to be considered for more interesting service than to be burned out as a member of the psychic choir of the astronomicon or worse, to be sacrificed to the Golden Throne. I was not powerful enough for the Adeptus Astra Telepathica so I was spared the soul binding and a congenital allergy to artificial gonadatrophic growth hormone made me unsuitable for being selected as an Astartes Librarian despite my desirable age. Instead I found myself on the path to being sanctioned and of use to the Imperial Guard. As such I was inducted into a secure facility of the Scholasta Progenum and trained to hone my body as well as my mind. I never took well to the military life. Too wilful. Too curious. I was ever under sanction and in fact labouring beneath almost constant threat of expulsion. 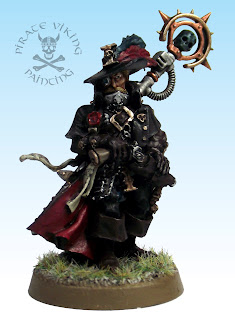 It was then, as I entered my seventeenth year, that Inquisitor Valens came to the institute. He was seeking young graduate soldiers to join his extensive organisation before a crusade against the Demiurg. While there he heard the masters tearing strips off me once again and turned a bored mind toward me. Valens was a potent psychic talent, still far outstripping my abilities and my adolescent brain presented no challenge whatsoever to his mind. He saw me completely, every strength, every weakness, my whole potential. Clearly he liked what he saw as he requested I be added to the levy. Truly, I think my masters were glad to be rid of me. I served first as his batman and scribe and rose to the level of interrogator under his tutelage. I laugh now to think of what he must think of his student today. Valens is a straight arrow monodominant Ordo Xenos, an ancient bear of a man in wheezing tarnished power armour that contains the life support that keeps him going. He knows, passionately, the truth of the Imperium and its manifest destiny in the galaxy. The alien has no place in his Imperium – or anywhere bordering it for that matter – and he has dedicated his life to studying, tracking and dispatching the Xenos filth.

I earned my rosette comparatively early, a mere stripling at 43. Valens had always despaired of my subtler style of Inquisition but acknowledged that it had its place. Just nowhere near him! Fortunately, I knew where my talents lay. We had been cult hunting for the decade leading up to my advancement. Mostly misguided admirers of the devil breed Eldar raiders that plagued the area but two genuine genestealer cults. I saw these as far, far more dangerous than any xenos race. I recognise that mankind owns the stars and has a right to whatever world we wish to take but frankly, half of the foes we challenged had next to no interest in humanity and we had no interest in their worlds. I prioritise immediate threats to the glorious Imperium of mankind and see heretical cults and splinter organisations as being the cancer that eats at the heart of His blessed majesties greatest work. I elected to join the Ordo Hereticus and spend my career there. My master grumbled and sneered but eventually congratulated me and immediately departed on a fifty year crusade against the Hrud. As far as I know, he is still there. 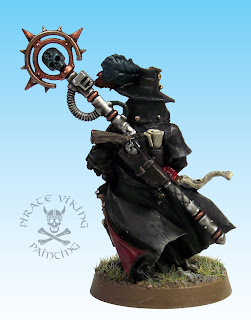 I mentioned a subtler style of Inquisition. I am what most would call an Amalathean. I value the stability and surety of the Emperor’s plan as we understand it and will destroy anything that threatens that stability. We despise factionalism – the terrible irony that we are a faction ourselves is not lost – and seek to maintain the Imperium as it is. We are not so arrogant as to assume that we know better than the Emperor the direction humanity should take. For my part I take this seriously. I will not ride roughshod over local authorities. I request, I do not demand. I inform of my actions and include them where possible. I do not go in for flashy ornamentation or lavish standards of living. My appearance is crafted to be the popular image of the Inquisitor. Having said all of this I do recognise the need for caution and stealth. My first few weeks in a new situation will normally be covert as my followers work up the intelligence needed to assess the situation. Only when I am certain of my position and ready to act will I approach local law enforcement and request their aid in my work. If they are part of my work, only then do I disturb the Arbites.


Other Inquisitors will roll their eyes at this. We have the authority to command the highest echelons of society, why I bother with the ordinary constabulary is a source of mystery to them. Indeed, my master would come upon a world like a hurricane. I watched him almost paralyse whole cities as he seconded huge numbers of personelle to his mission. The results were always fast but the fallout often caused more misery than the heresy we were there to eliminate. He was effective but rarely engendered enthusiastic co-operation. I can argue my case and methods but frankly they are my own and it is how I prefer to operate and I care little for the opinions of my bolder peers. I do have one hangover from my mentor, a fondness for a fairly large permanent support organisation. Before we dive into the affairs of the Cetus Scrutiny I feel I should introduce at least the inner circle as they will be constantly referenced...

Continue on to Episode II

There we leave it for the time being, next time, I will start to introduce the warband that supports the Inquisitor, starting with his treasured inner circle of friends and advisers. You can read about painting and converting Vandemar over on Pirate Viking Painting. Hope all this prose is of interest to people other than me! Until next time...