By Charlie September 02, 2014
We’re not dead! Two and a half years of weekly posting followed by almost two months of total silence... it probably seemed a bit out of sorts. And, perhaps, that’s because things were out of sorts (we all have our moments). But don't worry, this post isn’t about deep emotional stuff, it’s about orcs, and paint, and, and... spaceships.

Some of you will never have heard of Battlefleet Gothic, whereas some of you will, quite rightly, know it as Games Workshop’s Most Awesome Game. There may be people with other opinions, but they’re wrong.

It’s been years since I played BFG properly, mainly because there ain’t that many folks who realise that it’s the best game ever, and moreover it’s bloody hard to buy something that’s been out of print for ten years. That eBay still features over 160 listings for the game in the UK, though, speaks to its longevity.

Anyway my housemate Jon and I have been checking it out. Overcome with enthusiasm, I have scraped an ork fleet together. Oh my god, I’d forgotten how quick it can be to paint a fleet. This lot got done last weekend: 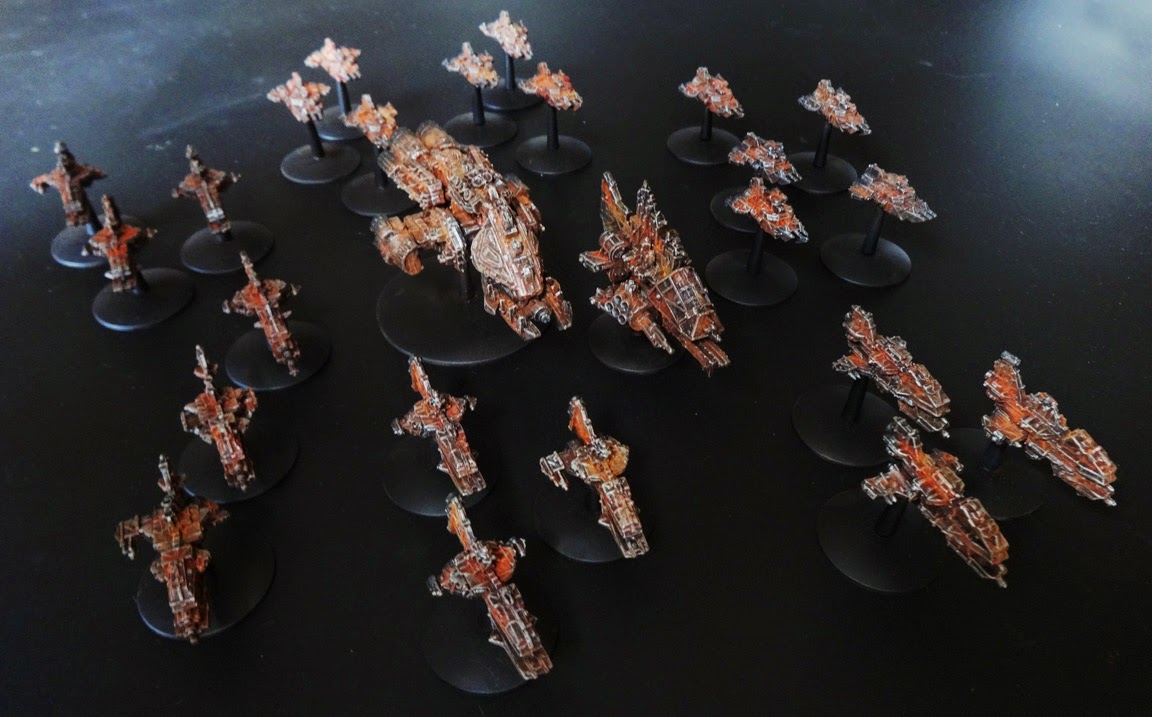 I haven’t used them yet, although I expect it will be amusing, what with ork ships being flappingly useless at anything other than flying straight forwards and hitting like a brick. Moving left? Nah. Engaging at range? Nah. Passing leadership tests ever? Zog it.

They’re going to get mashed, and frankly, I’ll deserve it after the hobby-ruining hurt I lay down on people with my eldar fleet as a spotty teenager.

If you’re curious to know how these dudes were painted, I just drybrushed them with chainmail and then threw in three different shades of rust weathering powder before drybrushing black soot onto the tails and painting the glowy rokkitts/go fasta holes/endjinns in orange (I know, I know, they look yellow in the pics).

You may also be wondering why they're all so rusty, since space isn't famous for its high oxygen content. Well, (a) I like orange, (b) ork escorts go down planetside to drop off troops, (c) I imagine orks do a good deal of building planetside, since I imagine ork space suits aren't up to much.

How are the engines so bright? Because they were painted white first and then tinted with orange and yellow. If you want it to be bright, no amount of basecoating over black will get the same effect.

Now as much as I’ve sung its praises, BFG does have one pitfall: spaceships are inherently less relatable than little dudes, a problem which Jon and I are countering by creating characters for our leaders and captains just as we do for the Fantasy campaign we’re playing. So far it’s made things much more juicy.

Many, many thanks to James, whose models these used to be. I hope you approve of what I’ve done with them. I’ll shortly be adding 9 more escorts and another kroozer, because yes.

Finally ,and perhaps more spiritually, I shall leave you all with an orkish space chant lifted straight from the BFG rulebook (to be intoned when hitching onto space hulks):