By Charlie November 13, 2014
As much as I’m not that keen on the current edition of 40K, our recent foray into Inquisitor means that my enthusiasm for the 40K mythos has crept back in, like a nervous and recently-evicted lover, scared that they’re only going to be inside the nice warm house for minutes rather than years.

Part of this enthusiasm is contingent upon not being subjected to endless numbers of Spehs Mahreens. As such, I found myself contemplating the Imperial Guard (or Astra Vauxhaulius, depending on which bit of the Imperium you're from). Those of you with an elephant's memory may remember the test model. Finally, I’ve had a go at some more. 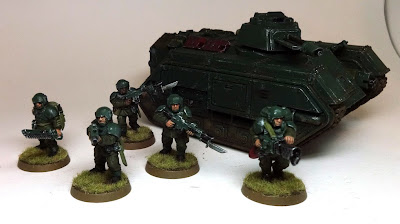 Now, everyone who’s ever tried to make a Guard army will remember the slog. You need a lot of little plastic dudes. As usual, one must strike a balance between speed and quality... the speed in this case being less than two hours to paint a tank.

If G-Dubz had never brought out Caliban Green spray, this army couldn’t exist. I’m just too lazy. But with said spray? It’s on. It’s on like 0.3 standard Imperial units of Donkey Kong.

The matte effect the spray provides is perfect for spray-painted metal plates, which means that my priming spray is also half the work done. Well, I say half... more like a tenth. But still, it’s a bloody quick tenth!
After spraying, the fatigues are painted Vallejo olive green and the webbing’s painted Vallejo Green Grey, after which Athonian Camoshade gets sloshed over both. The black parts of the gun are painted with black ink (so it’s a little shinier than paint would be) and then the guns and armour get weathered with silver. All that’s left is to paint the boots black, plus skin and bases. Another advantage of the green undercoat is that the black on the boots doesn’t look as dark and harsh as it would over a black undercoat. 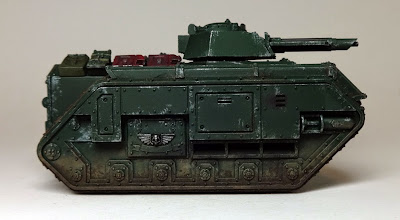 Remaining challenges include finding a quick method of painting dark skin that doesn’t look lifeless. Further research required... this is, I’m sure, one of the reasons why dark skin is so uncommon in wargaming models – it’s hard to do as quickly and effectively as lighter skin tones. I’m willing to put up with this in most Warhammer armies because it’s meant to be like medieval Europe but with more skullzz, but when it comes to 40K there’s no excuse for the relentless whitewash. In the finished Guard project I hope to have a fairly even spread of skin tones... and a relatively even spread of gender. Some of you may be wondering how I’ll manage the gender. I do have a plan on that front; you’ll just have to wait and see!

So, what do you think? A bit too lazy, or serviceable? If you’d do anything differently, drop a comment down below. It’s not too late for me to take any solid suggestions on board.

And finally, a (very brief) update on how things are going for the Empire in our Hochland campaign: 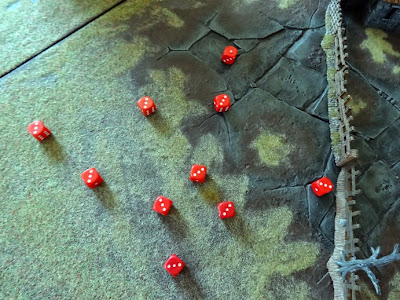