By Charlie November 25, 2014
Almost a year ago, I wrote issue 1 of the Hochland Gazette. Mainly because I fancied a bit of a giggle. I've now written issue 2 in the wake of a particularly stupid battle between Maisey and I. You see, I accidentally won a 3,500-point game after a regiment of flagellants failed their frenzy check. Yes, really. 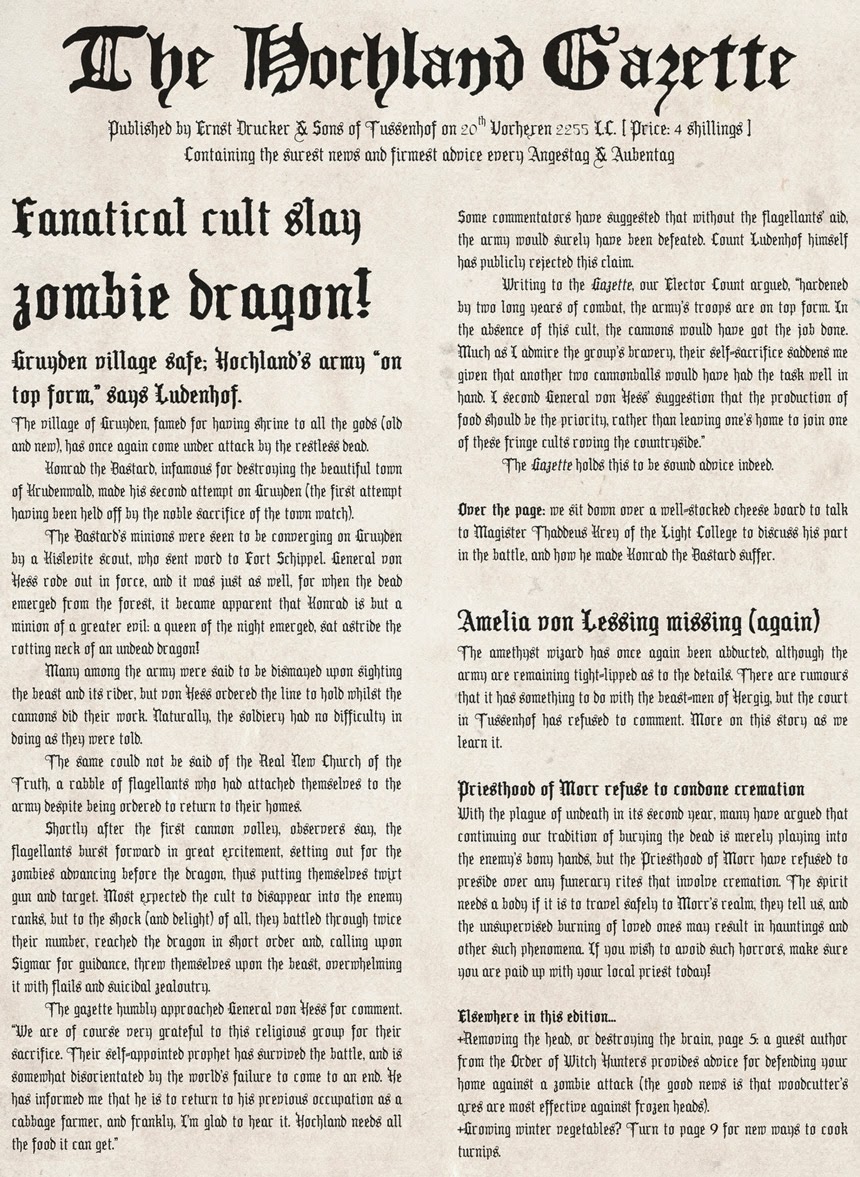 If you want the 'authentic' medieval paper-reading experience, feel free to do so by clicking on the image above. If you're less of a masochist and/or gothic font fetishist, here is the legible version:

Gruyden village safe; Hochland’s army “on top form,” says Ludenhof. The village of Gruyden, famed for having shrine to all the gods (old and new), has once again come under attack by the restless dead. Konrad the Bastard, infamous for destroying the beautiful town of Krudenwald, made his second attempt on Gruyden (the first attempt having been held off by the noble sacrifice of the town watch).

The Bastard’s minions were seen to be converging on Gruyden by a Kislevite scout, who sent word to Fort Schippel. General von Hess rode out in force, and it was just as well, for when the dead emerged from the forest, it became apparent that Konrad is but a minion of a greater evil: a queen of the night emerged, sat astride the rotting neck of an undead dragon!

Many among the army were said to be dismayed upon sighting the beast and its rider, but von Hess ordered the line to hold whilst the cannons did their work. Naturally, the soldiery had no difficulty in doing as they were told.

The same could not be said of the Real New Church of the Truth, a rabble of flagellants who had attached themselves to the army despite being ordered to return to their homes.

Shortly after the first cannon volley, observers say, the flagellants burst forward in great excitement, making for the zombies advancing before the dragon... thus putting themselves twixt gun and target. Most expected the cult to disappear into the enemy ranks, but to the shock (and delight) of all, they battled through twice their number, reached the dragon in short order and, calling upon Sigmar for guidance, threw themselves upon the beast, overwhelming it with flails and suicidal zealoutry.

The gazette humbly approached General von Hess for comment. “We are of course very grateful to this religious group for their sacrifice. Their self-appointed prophet has survived the battle, and is somewhat disorientated by the world’s failure to come to an end. He has informed me that he is to return to his previous occupation as a cabbage farmer, and frankly, I’m glad to hear it. Hochland needs all the food it can get.”

Some commentators have suggested that without the flagellants’ aid, the army would surely have been defeated. Count Ludenhof himself has publicly rejected this claim.

Writing to the Gazette, our Elector Count argued, “hardened by two long years of combat, the army’s troops are on top form. In the absence of this cult, the cannons would have got the job done. Much as I admire the group’s bravery, their self-sacrifice saddens me given that another two cannonballs would have had the task well in hand. I second General von Hess’ suggestion that the production of food should be the priority, rather than leaving one’s home to join one of these fringe cults roving the countryside.”
The Gazette holds this to be sound advice indeed.

Over the page: we sit down over a well-stocked cheese board to talk to Magister Thaddeus Krey of the Light College to discuss his part in the battle, and how he made Konrad the Bastard suffer.

Amelia von Lessing missing (again)
The amethyst wizard has once again been abducted, although the army are remaining tight-lipped as to the details. There are rumours that it has something to do with the beast-men of Hergig, but the court in Tussenhof has refused to comment. More on this story as we learn it.

Priesthood of Morr refuse to condone cremation
With the plague of undeath in its second year, many have argued that continuing our tradition of burying the dead is merely providing our enemy with new recruits, but the Priesthood of Morr have refused to preside over any funerary rites that involve cremation. The spirit needs a body if it is to travel safely to Morr’s realm, they tell us, and the unsupervised burning of loved ones may result in hauntings and other such phenomena. If you wish to avoid such horrors, make sure you are paid up with your local priest today!

Elsewhere in this edition...
+Removing the head, or destroying the brain, page 5: a guest author from the Order of Witch Hunters provides advice for defending your home against a zombie attack (the good news is that woodcutter’s axes are most effective against frozen heads).
+Growing winter vegetables? Turn to page 9 for new ways to cook turnips.

And now for some hideously incompetent photos of said battle:

The flagellants' unexpected charge meant that suddenly, I was committed. On turn two. I had to make them last as long as possible, and to that end, I threw in a long-range Wyssan's Wildform from Febe. She miscast, and wounded both herself, my wizard lord, and two warrior priests, but I can't complain, since it resulted in the flagellants killing 35 zombies on the charge for negligible losses. The remaining zombies crumbled, and the flagellants overran into the zombie dragon, meaning they got to fight the dragon during Maisey's turn two.

The dragon was killed before it even got to strike, and the undead army - once they lost their necromancer thanks to Thaddeus' Net of Amyntok - started to crumble. We called it at the end of game turn three, because we'd gotten to the point of mop-up combats like the one below, which shows a horde of greatswords about to charge twenty zombies. 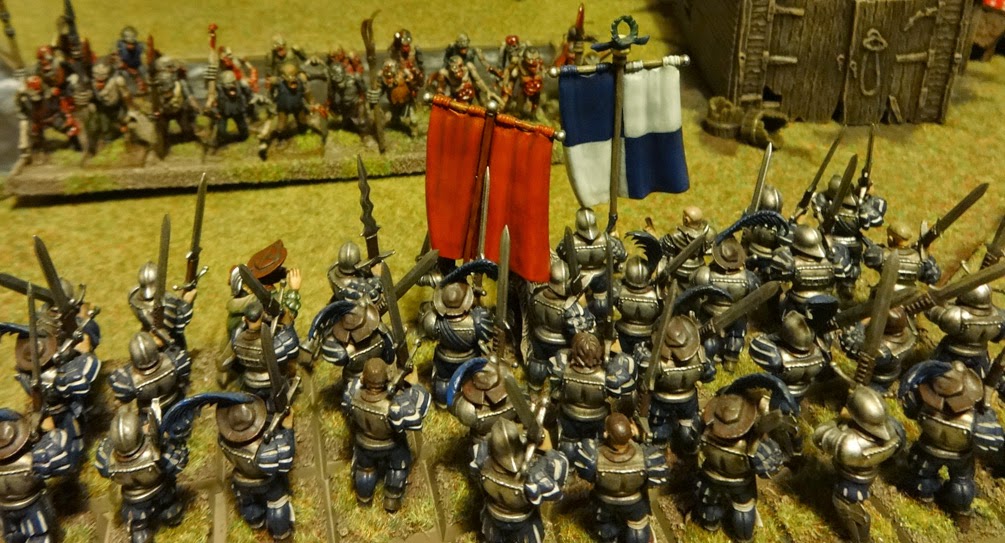 To be fair, the vampires' left flank was still going strong, with a vampire, a varghulf and a regiment of black knights doing what they do best, and Maisey gets serious kudos for being incredibly gentlemanly about the whole thing (probably because both of us knew it to be a complete farce). Hopefully there'll be a rematch before long, and he'll have a stab at revenge. Lord knows I deserve it.