By Charlie September 18, 2015
There's plenty of folks around making 'true-scale' space marines, where you make an astartes look even bigger so he towers over the other wee men on the table. Well I've headed in the opposite direction, in that I've massively reduced the bore on my Russ' battlecannon. 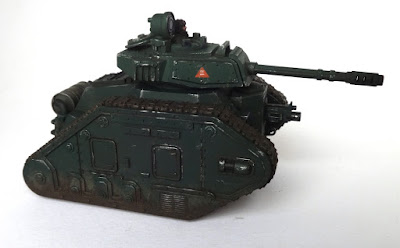 Why would I mess with such an iconic design? Because I find the calibre of the standard tank to be immersion-breaking in its hugeness. It looks like it's designed to shoot beer kegs, not shells.

This preposterous barrel width looks fine on the Baneblade, because the rest of the tank is huge enough that it looks mostly in-proportion, that is, like a battleship cannon on a land vehicle. On a Russ? Not to my tastes. Once I swapped the barrel for one of the four long-barreled autocannons you get with the Hydra/Wyvern kit, I was surprised at how much it changes the look of the tank. 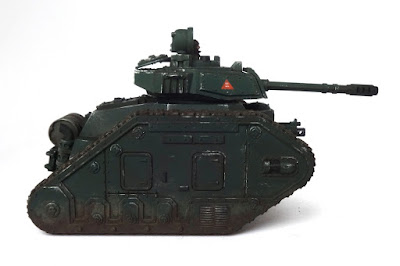 In case you're wondering, yes, there was some conversion work. Here's a pre-paint closeup of the turret following some careful plasticard slicing and green stuffing: 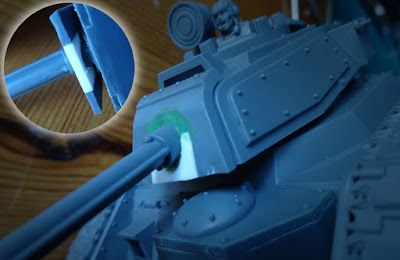 Oh and here the tank is chillin' with members of the 2nd platoon of Echo Company, the 107th Ankran Mechanised Infantry. More of them to come. Mmmmm, basic-ass paint jobs.

Finally, since it doesn't really deserve a post all on its own, here's a photo showing almost all of my three thousand point ork fleet what I done finished the other week (there's a few squadrons of escorts not pictured that were in the other photos, but the other photos sucked too hard to use here, which is saying something).

p.s. You may have noticed the astonishing rarity of posts these days. All I can say is that the hobby bug comes in unpredictable waves, and those waves can be few and far between when your brain meats en't treating you well. If this wasn't a hobby blog I'd talk about it, but I don't think anyone's come here for some deep insights into how depression makes you less interested in the things you love. If for some bizarre reason you do want to know how my faltering mind and my hobby intersect, or if you wish to share your own experiences, you're very welcome to say/do so below, and I shall respond.