By Charlie January 22, 2017
My love of the Olde Worlde has been rejuvinated thanks largely to Total War: Warhammer. I maintain they should have called it Total Warhammer, thus providing both a shorter title and a playground insult, i.e. "Jamie stole my biscuits and he peed in Archie's orange juice. Archie says he's a total warhammer."

Before I get on with today's actual post, here's a flash review of Total Warhammer: it's an imaginatively faithful adaptation whose only misstep is to follow GW's suggestion of occasionally replacing a mountain with a giant stone skull. In every other respect it's fun and well-paced, and surprisingly tasteful compared to some other GW adaptations.

Anyway, I mention all this because I enjoyed Total Warhammer so much that it gave me the urge to paint more state troops of the Empire. This had the added advantage of clearing something out of my overpopulated WIP tray. And so without further ado, here are the Heedenhof Greenleaves: 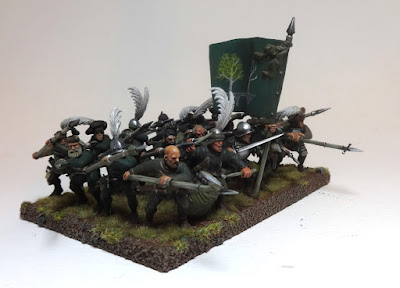 This regiment was hastily assembled in the small market town of Heedenhof after Splendiferus/Emma captured the town just over the other side of the river, as per the campaign map. I wanted them to look like a bargain basement regiment, so they got spears (easy to manufacture) and faded green uniforms (because they didn't have any red dye at the time, and they were in a rush). 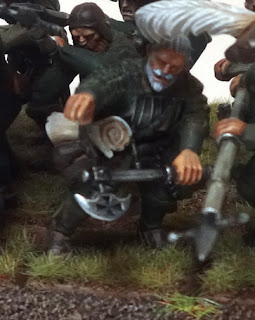 The only experienced soldier is the sergeant: a retired swordsman who thought his soldiering days were done. He's absolutely thrilled to be back in uniform and teaching a bunch of bumpkins how to use their stabby sticks.

Since having a whole human skull on your belt is stupid, I chopped it off and replaced it with a scroll from the flagellant kit to represent a map, or maybe something one of his kids drew. Or emergency arsewipes. Or a map his kid drew on which he now plans to use for emergency arsewipes.

Finally, there's the banner. As has been previously established, I tend to get a tad overexcited when it comes to this part. 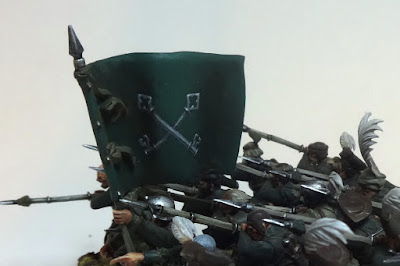 The crossed keys are a common enough icon, but apt here: the Greenleaves are town guards, and Hochland's military use a lot of cross motifs in their heraldry. 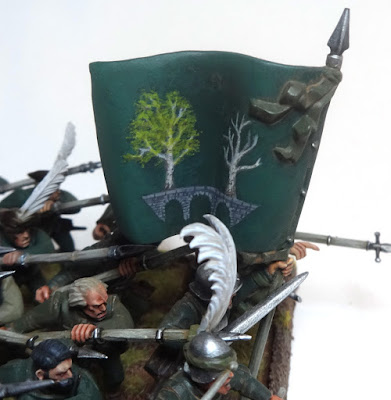 The trees linked by the bridge take a little more explaining. I imagined that Heedenhof and Bergendorf, having always been linked by a bridge across the River Flaschgang, were effectively one large town with two names. Thus, I imagine when Bergendorf fell to the Norscans, it would have been like a twin losing their sibling. The Greenleaves' banner represents this, with two trees standing atop a bridge. One tree has new green leaves, representing new growth, whereas the other remains leafless. Whether that means Bergendorf is dead, or merely awaiting the turn of the seasons, is probably in the eye of the beholder. Given the extent to which Emma informed me her beastmen had shat all over Bergendorf, the local foliage will at least have plenty of fertiliser.

Anyway, it feels surprisingly good to have removed something from my epic heap of unfinished crap. Hopefully the momentum thus generated can be sustained. Thanks, Total War. You made me paint little green men.