By Charlie March 20, 2017
Maisey has been organising a four-player Frostgrave campaign of late, and the prospect of a wizard-centric spiritual successor to Mordheim was more than a little tempting. We decided we’d do this aaaages ago but as with so much last year, it never materialised. Well by Jove, 2017 remains the Year of Finishing, and thus have I finished another project: my Frostgrave warband. As such, I thought I’d wurble about my spell choices, my henchfolk selections, and a wee sprinkling of each character’s background.

I won’t be reviewing the game just yet; we’ve played a few skirmishes and they were great fun, but I’d like to have a full campaign under my belt before presuming to have an opinion of any relevance.

THE WIZARD
This is Ilandrin. He’s convinced that other wizards are irredeemably selfish muppets, and if they’re allowed to plunder the ruins of Felstad then the prevalence of destructive magical duels will inevitably worsen, catching the common folk (and probably livestock) in the crossfire. He therefore intends to hoard all the swag, put it somewhere safe, then go back to a life of quiet contemplation in his tower having averted certain disaster. He sees absolutely no flaws or double standards in this plan.

Most people would describe Ilandrin as a reclusive snob. They’re right. That said, those who know him better would add that he’s a thwarted idealist; someone who spent their youth fighting for a better world only to lose heart when he realised the fight could never be won with any permanence. People would always be selfish and short-sighted, and nothing he did would change that.

The rediscovery of Felstad is the first thing that has motivated him to leave his tower for decades. Here he sees a finite goal that will make a tangible difference, and has thrust himself into the endeavour with a long-lost determination.

His rekindled enthusiasm has also brought back his sense of humour, although his associates consider this to be something of a curse. What Ilandrin calls wordsmithery, they call dreadful puns of the sort made by a father determined to humiliate his progeny.

SPELLS
There are ten different schools of magic in Frostgrave. When creating a starting wizard, you have to pick from a variety of disciplines as well as spells from your own school, which makes for an enjoyable level of flexibility to your initial character build.

Ilandrin is a thaumaturge, which means he’s mostly into healing people rather than exploderising them. Thus, my initial spell choices are mostly about trying to be a nice guy in an ultraviolent situation. This has the major downside that a fair chunk of the experience in Frostgrave is earned by killing/injuring people, but dash it all, one must be true to oneself.


Spells wot I want in the future
If I can scrape together the coin, I’ll strongly consider forking out for dispel, and possibly also miraculous cure if I accrue any nasty injuries. Maybe Lady Luck will let me pick these spells up as random loot, but it seems statistically improbable!

Apprentice: Gili the Exile
The Rite of Nullification is carried out on those few dwarves who have any magic in their blood. A dwarf would say this is because combining a lust for gold with a lust for arcane power is a recipe for disaster; cynics suggest that dwarves are just rubbish at magic and don’t want to embarrass themselves. Either way, the important thing is that no-one refuses the Rite of Nullification.

Except Gili, daughter of Thodrum.

When she became the first dwarf in recorded history to refuse the rite, her family exiled her to avoid dishonour. Appalled by the family’s willingness to cast her aside, Gili’s brother Gandric followed her into exile, leaving the House of Thodrum heirless, and the two of them began searching for a tutor in the roofless realm of the surface.

Every wizard they met laughed and turned Gili down; life was too short to even try training a dwarf. One said he’d have more luck squeezing gold out of a goose. It became apparent to Gili that she needed to find a master so long-lived that time was no issue, and so headed off to the elven city of Arn Thalor. There she met a new problem: blatant racism. She persevered, and eventually knocked on the door to a tower in the hills overlooking the white walls and blue slate rooves of the city, and Ilandrin answered the door.

He seemed neither friendly nor interested, but offered her access to his library and said that if she could look after herself she could stay. It seemed like the best offer going, so Gili and Gandric rented a room in a local tavern, and while she made the daily trek up to Ilandrin’s tower, Gandric kept them in bread by working as a mercenary. Gili slowly got to know the wizards in the area, and saw humans and elves who started learning after her become fully-fledged wizards. She spent years trying to master even the most basic cantrips, and while she came close to quitting on several occasions, she never gave up. In time, her determination moved Ilandrin, and he began to train her properly. This has earned Ilandrin a fair amount of mockery from his peers, although he doesn’t seem to care.

Something finally clicked in Gili about three years prior to the rediscovery of Felstad, and since then, her skills have grown at a normal rate. Just as well, Ilandrin reasons, since he’ll need all the help he can get in the ruins of the frozen city.

Henchpersons
Since Ilandrin is a perfectionist and a snob, the value of hiring plenty of cheap thugs and thieves to carry treasure is lost on him. He’s hired the best bodyguards money can buy, and even his expedition’s cooks and camp staff are well-trained marksmen.

Gandric is far more pragmatic than his sister, and worries that her relentless optimism will get her killed. As such, he rarely leaves her unattended. This is a source of both gratitude and frustration, but ultimately Gili knows she’d be dead if it weren’t for her brother’s axe. In rules terms, Gandric is a templar with decent armour and a two-handed weapon.

Uhtred & Adebola
These two warriors come as a pair in more ways than one. Uhtred, a well-travelled and respected mercenary, met Adebola during his travels, and brought his lover home with him after hearing a big magical ruined city had thawed out right next to the village he grew up in. Their relationship is somewhat inspired by an incredibly NSFW and hilariously penis-filled episode of Oglaf.


What Ilandrin doesn’t know (yet) is that Adebola isn’t really a dedicated warrior but more of an explorer, despite Uhtred’s claims otherwise, and will mainly be using muscle and enthusiasm to survive in Felstad. This little facet of Adebola’s character came into being because the sculpt of the model is leaning forwards spectacularly, implying a total lack of discipline and training.

In rules terms, Uhtred is a knight and Adebola is an infantryman.

Hesla & Bolbert Whindle
Halflings are famous for their cooking skills, and so when Ilandrin saw husband and wife Bolbert and Hesla advertising themselves as local guides, trackers, and cooks, he hired them on the spot. If left in the same place, they can spend hours bickering over a bubbling pot of stew, and so Ilandrin is finding it best to take one of them along as a pathfinder whilst leaving the other to mind the camp.

In rules terms, both Hesla and Bolbert are crossbowmen, and until I’ve gathered more gold only one of them can come along on an excursion.

Reinforcements
In case things actually go well and I manage to yoink swag aplenty, it seemed prudent to paint up some reinforcements. These come in the form of a bonus Halfling (as explained above) and two well-equipped knights: Solveig Ulrikasdottir and Ragna Yngvildrsdottir. This would take me up to nine warband members, and the absolute max is ten. I’ll wait and see how things pan out before I decide on a tenth trusty assistant. 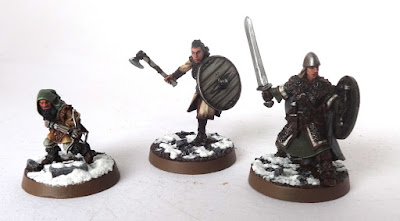 PAINTING WOES
Something else worth mentioning: painting a warband is essentially a chance to paint a bunch of completely individual models, and that gave me an unmissable opportunity to experiment with various painting techniques. I wanted to try and create old, worn-looking fabrics rather than the cleaner look one achieves with conventional highlighting/blending. Did it work? No. I misjudged the strength of my glazes, or misjudged colours, and the end results often looked a lot flatter than intended, particularly on Ilandrin. The problem was compounded by the limited amounts of painting I’ve done over the past few years, but oh well. Nothing ventured, nothing gained, and this has been a fun little side-project. The warband has the overall tone I was going for, even if the end result isn't necessarily my personal best.

There’s still some scenery and some NPCs to paint, and then we’ll creep our way into the ruins and try not to get eaten / shot / fireballed / frozen / zapped / mauled / clawed / trampled / splattered on a wall. Good times.