Mark: As this is the year of finishing things* I decided to pick up two much neglected models I’d started some time ago: my two Gork / Morkanauts.

This is the rather sad state they were in in November.

A lot of people dislike the Gokanaut / Morkanaut model (hereinafter referred to as a 'Naut) and cite its ungainly gait, dodgy balance and funny looking transport section.
I’m happy with the general shape of the Gorkanaut. It’s the add-on bits like the extra big shootas, rokkits and force field that I really hate. All in all, It makes the 'Naut look like a McWarmachine. 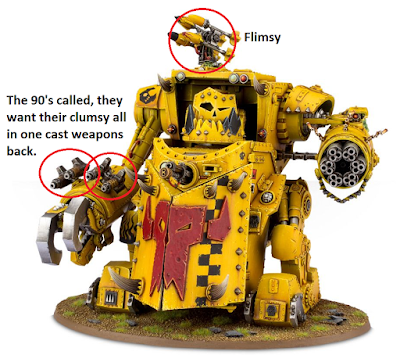 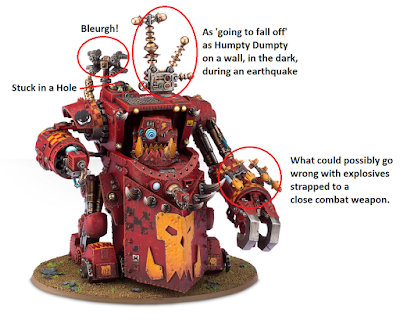 Honestly, these bits are gopping. They give every appearance of being after-thoughts, added to up-gun the model and sculpted with an eye solely on keeping sprue space down. Compare the big shootas to the ones you get on the battlewagon sprue and you'll see what I mean.

As per usual, I forgot to take enough photos during construction and painting. You'll have to use your imagination.

But first, I had to get round the problem of the dodgy add-on bits.
The Makings

For the Borkanaut, I added a gunner with a rokkit launcher from the Deff Dredd pack. I used a Warbike’s dakkaguns at the shoulder and mounted the skorcha and a ‘borrowed’ heavy bolter on the saw arm. I wish I’d had the shoulder idea sooner, as I’d have mounted the heavy bolter on the other shoulder for cleaner looking fighting limbs.
I wanted to make the Borkanaut look like it was running forwards with one leg off the floor. To this end, so I reinforced the left leg by inserting a steel rod as a splint through the leg and across the joint to the body.

Sadly, there was still too much flex across the upper leg, so the right leg still touches the floor.

The Dorkanaut was easier. The removal of the legs gave me the opportunity to mount some spare Baneblade sponsons on the side. The rokkits were spares from  from a Taurox. For the force field, I mixed up a Bastion’s lascannon with the included force field bits to make something that looked a little less ‘gaffer taped-on’.

I also replaced one of the claws with a rip saw from a Mega Dredd and changed the exhausts from the stock options to big rig style columnar exhausts. Although, in retrospect, the shroud placement makes no sense (but it looks sort of cool).

In terms of painting, the Dorkanaut would be Bad Moons (yellow) and the Borkanaut would be Blood Axes, which meant camouflage*** . In looking for inspiration for the camouflage, I turned to my favourite video game of all time and borrowed the camo pattern from a Super Pershing. I used the general scheme, but replaced the yellow with grey.


This meant masking tape.
This turned out to be a massive faff.

For both ‘Nauts, I wanted to use the hairspray method for chipping. This meant for the camouflage pattern had to be applied over a pre-chipped and sealed basecoat – otherwise the masking tape would rip off the underlying paint layer – not good.

I sprayed base-coats for both models and when I applied the top yellow to the Dorkanaut (Bad Moons Yellow from the 90’s) it went a bit, well, fluorescent. Possibly because the topcoat was on a rather dark yellow base-coat. So to tone this down, I applied a brown filter wash that brought more red tone to the model and helped to reduce the fluorescence. Using the filter also gave me the opportunity to add streaks in the drying wash (simulating rain washing dirt down the Naut) by removing paint in a downwards, irregular pattern with a clean brush. 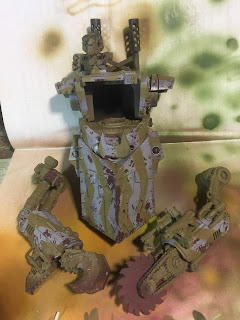 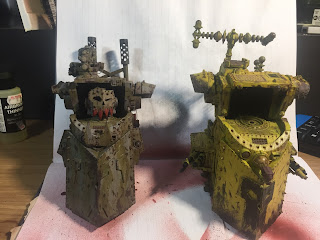 This worked well on the yellow Dorkanaut. Unfortunately, this the chipping and proceeding weathering steps on the Borkanaut did remove some of the definition of the camoflague and left teh scheme looking a little dead and flat.

I used weathering powders to help tie the models to their bases - which had been built to resembel ruined city. I applied them by flicking the powders onto areas which had been painted with AK Pigment fixer. I made a conscious effort not to overdo the powder weathering as I wanted these models to look like they were crunching over dry concrete rather than through a soggy swamp.

After this, I forgot to take photos, so here we are, with the finished articles. Not quite what I hoped for, particularly as the Borkanaut looks a little 'flat' but I’m happy enough. 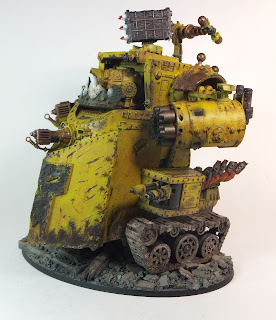 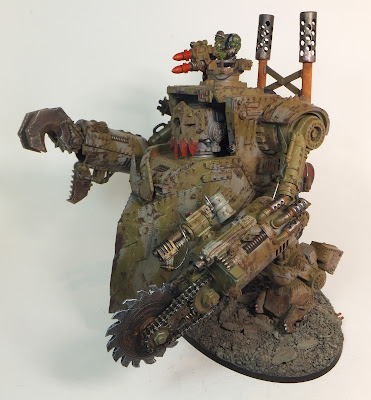 So that's it. I learnt some new stuff, although I’m still a bit shaky with hairspray chipping. I sometimes find that paint sloughs off in massive sheets, and sometimes it won't come off with an angle grinder.

I will be doing camo on an Ork vehicle again, as I really like the contradiction. Although next time I'll either use a much simpler vehicle or blu-tack.

Now to come up with a model for a Blood Axe Warboss.

Will I be making any more?

No. For two reasons.

Firstly: Although I like converting things, I don't like having to be forced to do it to get round really cheap and nasty components and an overly busy model.

I can’t remember what I paid for these two (because I bought them some years ago) but the current price point for 'Nauts is a bit silly. A Gorkanaut is only £5 cheaper than the Stompa. Honestly, I'd much rather buy another Stompa - it’s a more satisfying, bigger, and more coherent looking kit Plus the Stompa kit is so much better for conversions and it gives up a huge amount of spare parts.

*** I wonder if they know how funny this song is?