By Jeff February 26, 2018
Jeff: Greetings fellow explorers of the City of Chilly Corpse Disposal Facility! We have been making a few more forays into the Frozen City and as a result my warband has grown even more than it was before. Time to share these bad hombres (and have a natter about winter basing at the latter part of this post). 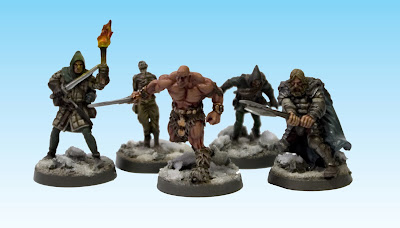 Owing to some well-applied violence and not a little luck in the early stages of the campaign I had wound up with what is colloquially termed All Of The Money. Thus I had much to spend to expand my warband and thought some pricey specialists would do the job. One barbarian, a templar and 2 treasure hunters later and the job was a good 'un. I've taken an inn (the "Ragged Duchess") over as my headquarters so I can have 11 fighters total in the warband and this fills all the slots. There's also the transient member of my warband, the model representing the succession of zombies all called Stinky Pete. 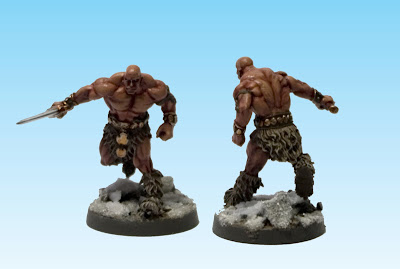 First up we'll take a gander at the magnificent thews of Kordac. Barbarian extraordinaire and former doorman of the Ragged Duchess. When Freya took it over she basically bought him in to the bargain. As far as painting went, this was always going to be about dat skin, bout dat skin no t-shirt... Initially I'd thought to have him tattooed but the sculpting is so nice that I decided to let the impressive musculature speak for itself. I tried to get that slightly pinkish look that cold Caucasian skin goes in the winter. Lots of mucking around with washes getting exactly the tone I wanted. 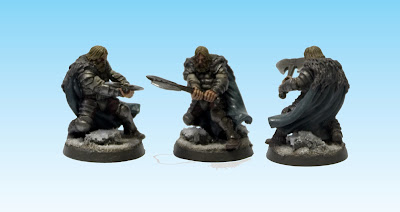 Next we have Templar-in-name-only Maximillian Eichel. Eichel is a mercenary through and through and when rumours spread of a wealthy wizard chucking money around reached him he had to answer that call. I wanted a really worn, solid look to his armour and weapons. This meant starting from quite a dark metallic tone with a good deal of rust-brown mixed in. Even well cared for metal will develop a patina unless mirror polished constantly so this gives it a lived-in heft. I then worked up the highlight colours leaving only the deepest recesses weathered. Continuing the rough-and-ready look I kept his clothing desaturated and "cheap" dye colours. 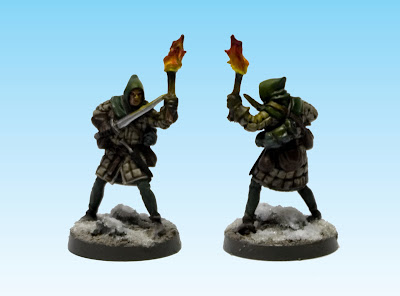 Rounding out the warband, we have a pair of treasure hunters. Treasure hunters are awesome in Frostgrave. Good fight stat combined with fast feet make them the ideal choice to grab risky, far-off treasures. Captain burney here is the first of two brothers, Malcolm and Ewan Ross are thieves for hire specialising in crypt breaking and tomb robbing. Two such utterly amoral creatures were the perfect choice for Freya and thus they were hired on the spot. Only thing worth nattering about on the painting of Malcolm is the torchlight. I tried a new method for the OSL, normally I mix the light colour with the base colour beneath. This time I wanted more of a "daylight" look to the torchlight and have it just tint the colour. So I tried many thin layers of yellow ink mixed with matt varnish. It left the painted colours beneath and just imparted a yellow glow. Happy with that. 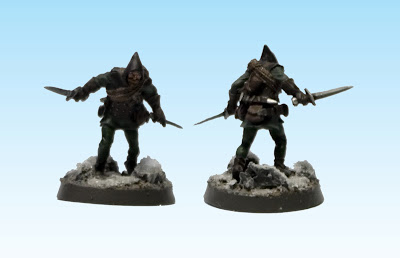 His brother Ewan is an almost impossible model to photograph as he's bent forward moving stealthily and quickly. Cracking miniature but naff for photography, lets draw a veil over this and head onwards to the smelliest member of the warband.

As if 11 warband members and two summon able demons was insufficient we also have the ability to raise a zombie to join the gang. The zombie is one of the excellent Red Box zombie models (as are Ewan and Malcolm) formerly available in the UK through-Hasslefree but no longer sadly (killed off by the damage done to the pound's standing against the dollar through Brexit). Stinky Pete bears my new favourite "corpse colour", it's a neutral brown like Leather Brown or Burnt Umber mixed with Stone Grey and then toned with glazes of Athonian Camoshade and thinned Blood For The Blood God mixed with black. Works really nicely. 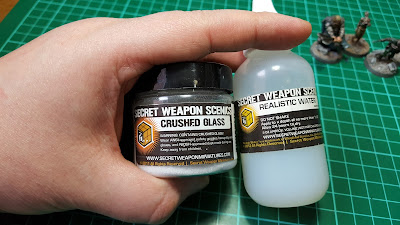 I've had some nice things said about my Frostgrave bases so I thought I'd share the method in not really a review, more of an evangelising of my favourite snow product: Secret Weapon's Crushed Glass snow scatter. Yep, crushed glass. So a few obvious caveats: no, this is not the sort of thing your 12 year old should be using without supervision, yes, this is absolutely nasty for hands, lungs and eyes so take precautions. That being said, like most dangerous things it is awesome at what it does. For best results you'll also want some pourable water effects. Secret Weapon also do one of these for convenience but there's a few companies out there that do it.

Start with the bases textured, painted and dried. I sometimes add a few tufts of grass to my snow basing but I'm keeping these rocky. Get some water effects out on your palette and paint it on to appropriate places on the base for snow to settle. Then dip the bases in the crushed glass like you would for other scatter. I find two dips works best. The first gets the solid glass into the water effects, the second adds a sparkly crust to the outside.

You get a nice realistic frosty tone to the base. If you want slushy snow use more water effects to suspend the glass and it makes lovely melting slush. Now, this is fine and all, but we can take it to the next level and add some more un-melted icy snow on appropriate bits. 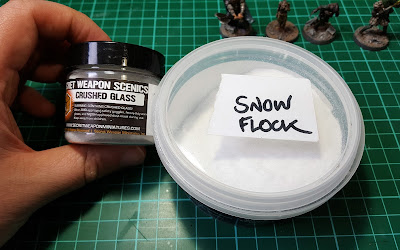 For this bit you want both the crushed glass and the more traditional white snow flock - tiny white plastic fibres - this will give a whiter, more opaque tone while maintaining the sparkle of the glass. Get a nice puddle of water effects - I recommend on an already painted bit of palette, this stuff sets like rock and it's easier to clean off the paint and take the snow mix with it. 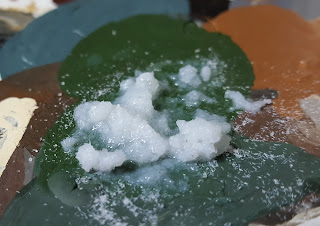 Now mix roughly 1:1 of glass and flock into the water effects until you get a sort of toothpaste consistency. This can now be picked up and sculpted with either a wooden toothpick or an old brush. 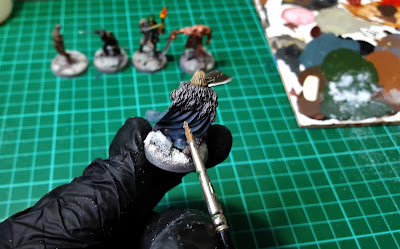 Here, I'm smoothing a layer of snow-mix onto the top of the rock - note sexy nitrile gloves for safety - it gives a nice thick layer of icy looking snow that seems more permanent than the rest. 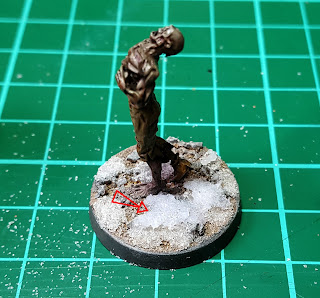 It's almost impossible to photograph as the reflection from the white and the glass just kill the subtle differences but you can sort of see the effect by the arrow on Stinky Pete's base. You can see the thicker snow next to the frosty stuff alongside.

And that's that! Hopefully that was helpful to someone, let me know your favourite snow techniques, I want to get even better at winterising! All that remains is a little bit of scenery perving at the table that my shiny shiny models got to play on last night: 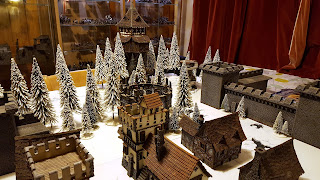 Mmmm, so chilly, so city. Charlie's collection looks so good with those snowy pines and all those tabletop world buildings. I shall leave you with that on this appropriately frigid night in the UK and wish you all happy treasure hunting!