This week I've managed to get finished a few extra henchmen for my Frost Grave war band. As you progress in Frost Grave you are able to hire additional minions to help with either finding of new treasures and artifacts or to fend off other wizards and their war bands.

For my additions we have some hapless adventurers who are only in it for the money. 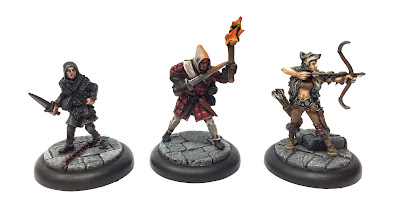 First up we have a Ranger. She's the nice outdoorsy type and enjoys walks in the woods, archery, and rustic haberdashery. Rangers have a good mix of speed, improved health, and ranged abilities. 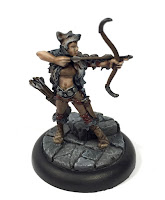 Next we have added a thief to the war band. He/She (I honestly can't tell the gender from the model) is a fully paid up member of the thieves guild, and thus is contractually obliged to wear nothing but black. Thieves are slightly faster than you average pleb, but they don't have much more going for them. Their main advantage is they are cheap to hire. 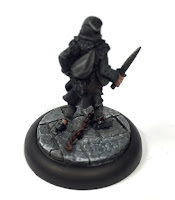 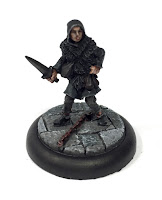 Last but no means least we have our dedicated treasure hunter. Equipped with a torch for checking the dimmest of corners and he has plenty of satchels strapped about his person to stash all his loot. 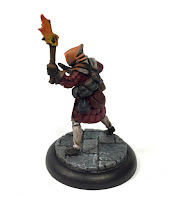 Not a massive amount to say about the painting here. I'm pretty happy with how the ranger's wolf skin turn out. It appears that googling reference material really helps. Also I attempted to do some glowing lighting stuff from the treasure hunters torch. I think it looks OK, but you can judge for yourselves. Treasure hunters are good in a scrap, faster than the average, and better health than your regular troops.

All these models I picked up from Hasslefree. Hasslefree is a great source of realistic, or at least not totally ridiculous, fantasy minis. It is pretty much my go to if I need need human fantasy models.