This week I have mostly been painting pink. Lots of pink. So much so that my paint palette looks like Barbie has killed and skinned a Unicorn on it (Unicorns have pink blood right?). This isn't because of some weird gender reveal plot for a baby we don't have (and not planning to have). No, this is because I managed to acquire yet more minions for my growing Tzeentch Chaos army. What self respecting Sorcerer wouldn't have mastered the art of summoning demons out of the warp? Not mine that's for sure.

I do have to admit that my paint collection is very limited in the number of pinks it contains. So limited that I didn't have any. Not knowing the paint range very well I simply ordered most of them and set about learning how to paint pink. My first comment on this is that it's hard. Not hard as in technically hard like trying to play Bach on the spoons, but hard like pushing a rock up a hill, repeatedly. I did try a simple basecoat/wash/drybrush/wash/highlight type method. It looked rubbish, so out with the power spray and back to the drawing board. I ended up doing four stages of neat layering to get the pink right. Each stage took at least two thin coats, often three, to get a good strong colour there. I was thinking about doing more but I might have to rethink that plan, or wait long enough that I forget the pain. 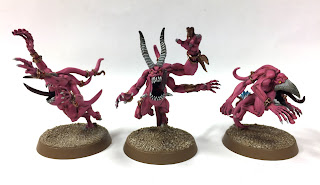 I will say that I really do like the models in the kit. Lots of arm and accessory options. Enough to be able to use the kit multiple times without getting too many that look the same. This is something that is sadly lacking in the Tzaangor models. There are a few poses within the Tzaangor kit that just stand out too much. The Horrors have enough interchangeable options that it shouldn't be a problem if I decided to add more later. 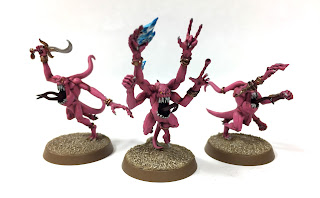 Another reason why I'm happy to have these running around is it gives me another tactical option. In fact they are fairly flexible. Sure they are only toughness 3 but they have an assault 2, 18" range, a 4+ invulnerable save, and can be summoned on to the board at will. Which, as Em found out when she tried to flank me with her Eldar, can create nice surprises for your opponent and give you some more tactical flexiblity. Oh, and if that wasn't enough, they are also collectively a psyker, so one more slice of Smite Spam to go into the sandwich of screw you that is my psychic phase! 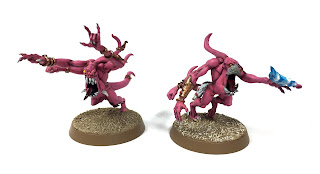 It is nice to have one of the classic Tzeentch units in the army. Sure all the new Tzaangor are nice and it's great having so many options available to you but having Horrors and Rubric Marines stomping around together feels delightfully old school. 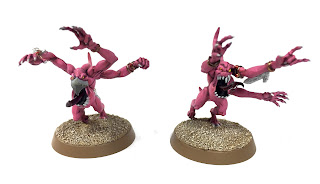 So, what is next for the Thousand Sons and their Tzeentch allies? Well, I know that I want to do a little re-organisation and swap out the regular cultist unit for some more Tzaangor (or similar). Those regular cultists are going to get expanded by using some of the Necromunda models and made into a little patrol detachment all of their own with a Dark Apostle and some armoured support. Speaking of which, I do have some plans to add some serious anti-armour punch in the form of a very converted Predator.

But before all of that I've got a large cemetery's worth of skeletons to paint...