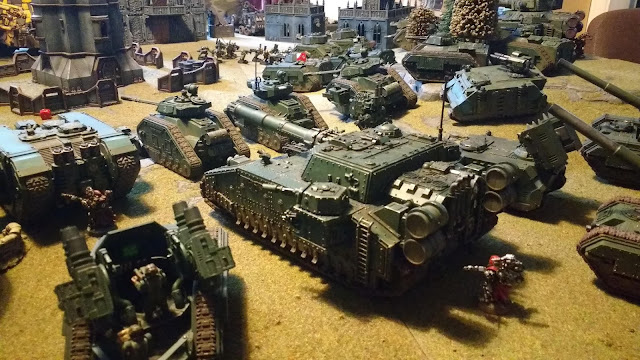 Mark wanted to celebrate the completion of his Dorkanaut and Borkanaut, and I recently finished my mechanised guard army, so we took a random day off work and threw down a big game of 40K. Power level 300ish, 6'x6'... everything looked peachy.

It would go disastrously wrong.

Everything started out fine. We set up the terrain, trying to strike a balance between having plenty of scenery but also enough space to fit our stuff on the board. If nothing else, I was very excited to fit a 6'x6' board in the house. Admittedly that's not really big enough for 300PL, and squeezing a 6'x6' into my gaming room is about as spatially optimistic as shoving Dwayne Johnson into a 1969 Mini Cooper. 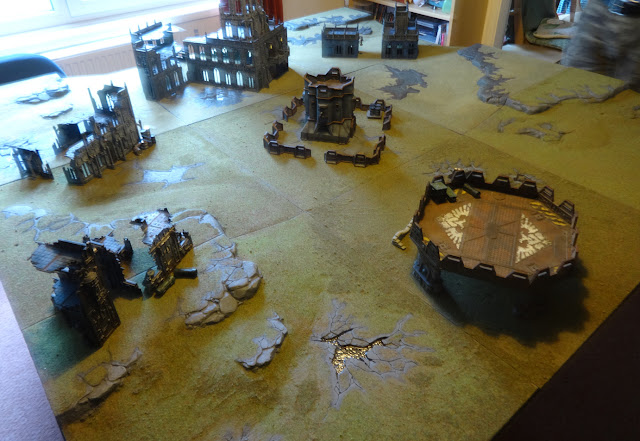 Since one side was still looking a bit sparse we chucked in some bonus trees, and then since the Imperial army was tanks and mounted infantry Mark picked the ruins for his deployment zone so his lootas had something to hide in.

But when we finished deployment, it became apparent that No Man's Land was in fact a yawning chasm of joy. "How bad could it be?" we wondered.

Then the Imperial force opened fire. 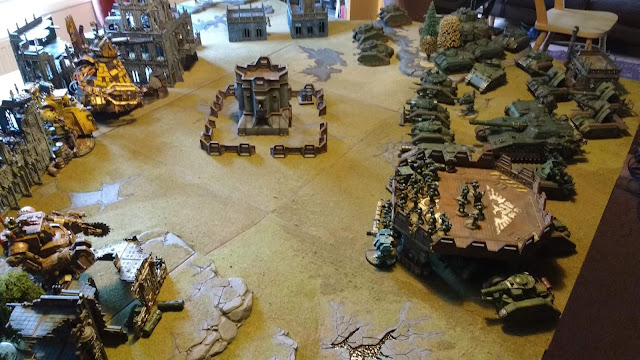 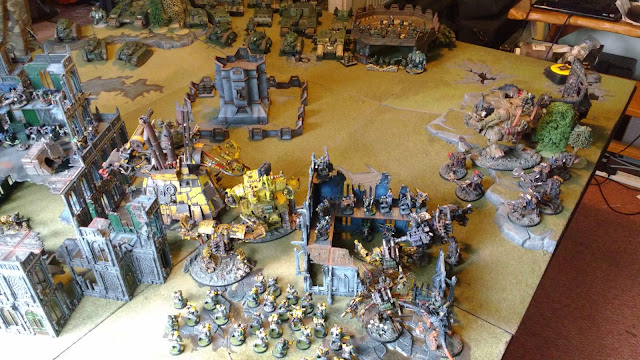 The shadowsord Furiosa casually atomised the Borkanaut in one shot, which I guess is kind of the point of the shadowsword, but still. Mark kept an admirably stiff upper lip as shiny new model syndrome sank its teeth in. Next, the Dorkanaut and the stompa Big Yellur took a pounding from the rest of the tanks. Finally, the lootas were taken out by massed artillery.

It was effectively over before Mark even had a turn.

The sweet taste of victory only satisfies when one has had a real fight, and neither of us were happy about how this had gone. We spitballed various ways of changing the game so that we'd both get a decent scrap. In the end we decided to recycle the dead pile from turn one and have them walk on my left flank.


Mark gamely pushed on with 'da plan' (run forward shouting Waaaagh!). Warboss Nazgit disembarked from the crippled Big Yellur with his ladz to make a desperate dash across No Man's Land. The ladz charged off towards the enemy tanks hollering with glee. Nazgit, however, rolled a 1 for his advance move, leaving him all alone and bereft of his meat shield; the meat shield who were now improvising a reggae drum solo by ineffectually banging their choppas on the hull of a demolisher.


The Imperial army weathered the mild drizzle of the ork shooting phase. Big Yellur was the only unit that achieved much of note, but even though some vehicles were damaged during ork turn 1, none were actually destroyed.

And then Imperial turn 2 happened.

How Mark stayed polite and chipper I don't know; he deserves some sort of award (not a medal, mind... at this point he probably feels he's had enough metal thrown at him). Either way, the flank attack was blunted by the leftmost tank squadron and the infantry on the landing pad, while the swarm of killa kans was whittled down by massed battlecannon fire. Then, finally, there came the shot that ended the game after a round and a half...

A full armoured column of Imperial tanks had concentrated their fire on the greenskin titan, and whilst it had slowed down it was somehow still on its feet and advancing towards them. Inside the turret of her tank, Sergeant Uraba looked through the viewfinder and tried not to panic. Even in her tank, she could feel its footfalls reverberate through the ground. Three storeys tall and blackened by the ordnance that had detonated on its hull, it was now surrounded by a cloud of dark smoke. The cloud was lit from within by the molten grooves cut into its hull by lascannons. Still, it walked. To its right was another heavy walker, almost as large.

Her crew were looking to her for guidance, and all she could think of was the family she'd left behind on Ankrah. If she wanted to see them again, she had to survive another seven years. That would be hard to do in a penal colony, and harder still if the orks conquered Samalut. Cowardice would just get her killed.

A momentary gap in the smoke revealed an opening in its hull. 'Hurlan!' she barked at the gunner, 'Three five two mark nine eight, wait for my signal.' Hurlan did as he was told, and the barrel altered its angle slightly. Timing was key; at this range there was almost no flight time to consider, it was more a matter of timing the rise and fall of the lumbering walker with the shot. The hole was obscured by smoke again, but she tracked the movement of the walker by the glow of the cooling lascannon impacts. 'Fire!'

The tank rocked back on its tracks. Uraba put her eyes back on the viewfinder just in time to see the titan stumble, then explode. A ten metre chunk of its hull was catapulted into the damaged heavy walker next to it, and struck its magazine. A second explosion tore the heavy walker apart as well, shredding the nearby orks and damaging their vehicles. In front of the wrecked titan, a lone huge ork was picking himself up and screaming in frustration at the mangled, blown-out bowl of metal. Too slowly, the ork saw the largest remaining chunk of the titan's hull was about to topple onto him. It accelerated as it fell, and too late, he tried to get out the way. The ground shook once more at the impact.

The ork horde made a noise which Uraba would later describe as being the sound a crowd makes in a carnivora when their favourite gladiator loses. Whether the noise was for the titan, or the large ork, or both... it didn't matter. The enemy were fleeing.

Major Kahurangi's voice came in over the vox. 'I don't know who fired Logan's magic bullet but you're a bloody legend. All units, forward!'

Up and down the line, tank exhausts snorted and roared as they surged toward the fleeing xenos.


Yep, that's right, the stompa exploded, which finished off the Dorkanaut, which also exploded, which killed a whole bunch of orks, damaged a megadread, and took out Warboss Nazgit. The surviving orks would be coming in piecemeal, and stood little chance of achieving anything. At this point, Mark threw in the towel, and quite frankly, fair enough. Given how ridiculously the game went, I think it might be one of the most sporting efforts I've ever seen, since most mortal gamers would have had a face like a slapped arse. Kudos, sir. Kudos.

Learning points
First, orks need a codex! The stompa seems underpowered for its cost, and ork shooting is meant to be haphazard not pointless. It's a relief to hear they're getting a book soon.

Second, we needed more line of sight blocking terrain in the middle. I was able to just stand still and unload. Whilst this left my inner Guard fanboy rigid with nerd glee, it wasn't a challenging game for me and it certainly wasn't a fun game for Mark.

Third, if you do have scenery, make sure it doesn't force a melee army to be so far back that they'll need three turns to reach you. Neither of us had played enough 8th edition 40K at this size to know how destructive the Imperial shooting phase would be, but I'm experienced enough at apocalypse games that I should've known the way we set things up would make for a one-sided fight.

Hopefully this cautionary tale has been of either use or amusement to you. Do share if you've had similarly ridiculous apocalypse mishaps. I can't wait to play another, more challenging game since both Mark and I took enormous amounts of pleasure from seeing all our toys on the table.