And the Orks will beat a path to your door.


A bit ago, Geoff said that he was about to make a Chinork for the Special Ork Service.


As luck would have it… this is something I’ve done recently for my own nefarious purposes, and here is its journey from bits to hits.. Or something.

Now, other than the joy of having my own unique thing, why would I bother scratch building it when Forgeworld make one?

Trouble is… I don’t particularly like the Forgeworld model.. For me, it looks too tall, too bulky and it doesn’t ‘feel’ like it could fly.

The ‘feel’ of a model is an important thing for me. Whilst a model (particularly an Ork one) doesn’t necessarily need to have all the bits that would make it function, it does have to look like it would or could work. My biggest problem with the FW Chinork is that it looks like the chain drive (running from the rear mounted engine to the front mounted rotor) would bend the vehicle in half.

My other problem with the Chinork is the rotors – I’ve found that the rotors on the plastic Deffkoptas are flimsy as all hell and I would definitely end up breaking the Chinork ones.

So with that in mind I began work on my own Chinork. I wanted it to look fast, look like it would work and be able to sit on the ground as scenery or on a flight stand for games.


So, I started with a plastic Deffkopta (with the unnecessary bits carefully cut off) for the pilots’ chair and front rotor, a trukk bed for the load area and a trukk engine for power.

The Trukk engine didn’t look big enough, so I doubled it and added a twin supercharger arrangement. 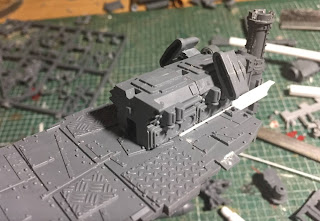 I also beefed up the gearbox and differential and equipped a rear mounted rotor arrangement. 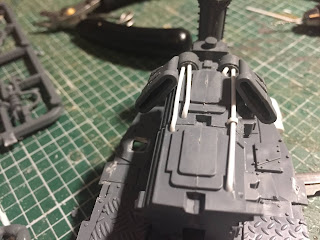 As usual, I got carried away and forgot to photograph anything. I installed the twin exhaust systems for the engines, the front bucket for the grot, the passenger fairing and the central bracing that would hold the thing together. 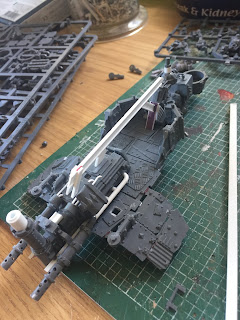 After putting the winglets on (thank you trukk kit yet again), I flipped it over and started to think about the gubbins I needed to fit. Initially, these were the guns (which I got from the no-longer-available Ork guns kit from Forgeworld), the bombs (which I liberated from the Ork bommer kit) and the landing skids (which I scratch built from Plasticard). 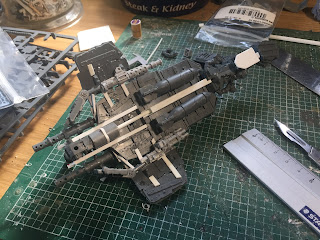 Skip another bit again (Photo reportage is not my strong point) and the gubbins on the bottom are all done. The very last bits I added where the fuel tanks, which I added when I realised that there was no space anywhere on the model for go-juice to be stored – again, adding the realism helps to improve the model. 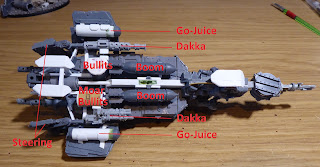 And… Here it is, on its flight stand, without the rotors on. In terms of the rotors, I prefer to use see-through plastic discs rather than modelling the rotors themselves as I feel that the disks make the thing look more like it’s in flight and improves the dynamism of the model 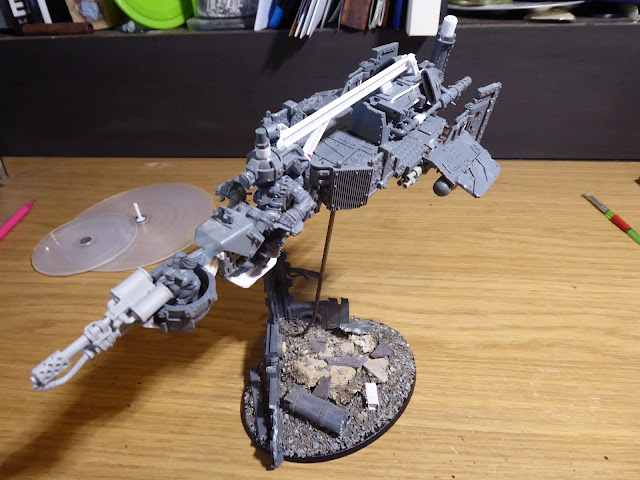 And here it is again with the rotors on, showing the front grot bucket and resident grot. Yes, he’s probably going to try using the Skorcha while the Chinork is at full speed and end up barbecuing himself, but hey, he’ll only do it once. 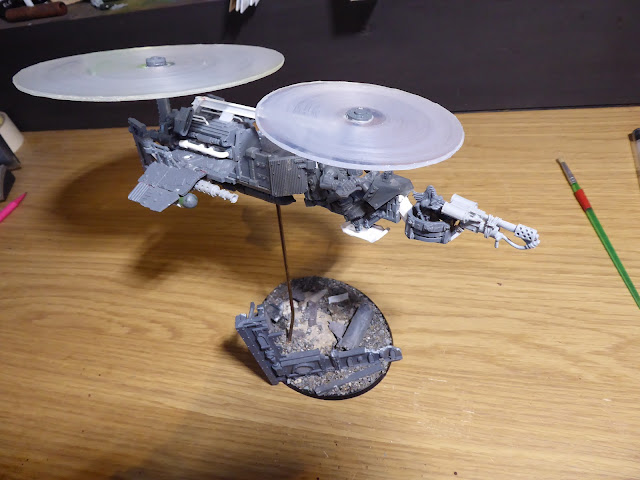 I made the flight stand with brass wire and a massive lump of greenstuff on the bottom to hold the brass wire securely.

To be fair it doesn’t feel like there’s quite enough vertical clearance on the transport bay, so the Orks are going to either have to learn to crouch or end up significantly shorter. But... its mine, its unique and it looks like it can go really, really fast. And that makes me happy.
Now I've got to paint it, and like a true BludAx, I've had a cunning plan...

As usual, comments, thoughts, withering sarcasm, all below.