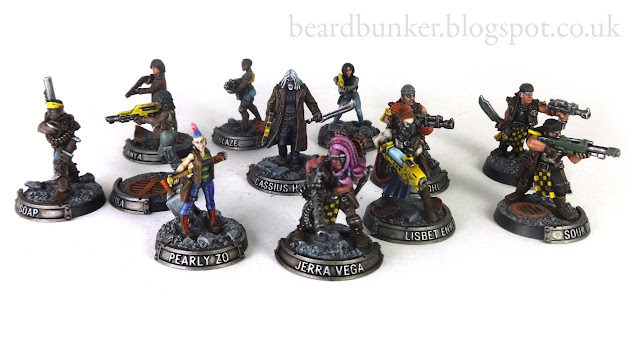 In case you haven't heard of Versatile Terrain, they (or rather, he... pretty sure it's a one man band) prints off customised name plates for all the common base shapes and sizes. You submit your list of names, he prints them with a sexy 3d printer, then posts them to you.

I was keen to pick some up (a) because I think they look cool, and (b) because they can optionally have 90 degree vision arcs notched in them, which is ideal for Necromunda. For clarity, I'll keep this review as short as possible, so let's get to it. 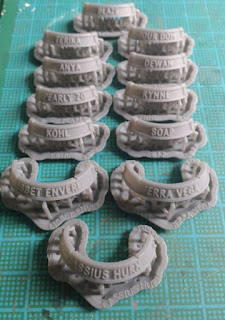 The Bad
The 90 degree notches aren't perfect; they're actually a little narrow. See the image below. Not the end of the world, and they still provide the benefit of making it very clear which way the model is facing (which, depending on  the pose, can sometimes be a little ambiguous). Beyond that, I have no complaints. 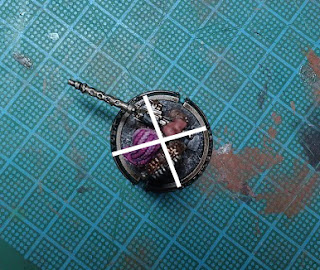 Your mileage may vary, but visually I'd kind of like it if you got a blank back plate to go around the rest of the base rim so that the whole thing was a consistent width, but that's just the obsessive perfectionist in me talking. If you're curious about the thickness, here's another top down view: 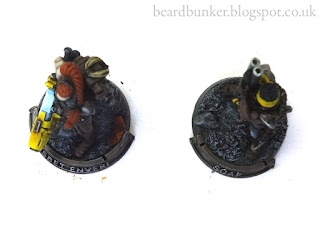 The Price
As you'd expect, the price scales with base size and plate length. For 25mm bases I was looking at about £2.00 a base, so I spent about £25 to get my whole gang done. That's an expense which I'm happy to swallow for a skirmish game where I'm painting such a limited number of minis. And obviously, you wouldn't get nameplates for every Intercessor in your marines army, right? RIGHT?

No I am not going to name every single marine in my upcoming primaris project. It's fine. Everything's fine.

Painting
This was unbelievably simple. I sprayed the plates as they came, so that I could hold onto the stands while painting them, then cut the stands off when the painting was over and it was time to superglue them onto the bases. The recipe I used was very simple:

1. Basecoat Army Painter gunmetal (GW Leadbelcher would do)
2. Shade with Agrax Earthshade
3. Nuln Oil Gloss
4. Pick out the names in a light silver just to help them stand out.

You could definitely do more with rust and all sorts, but I didn't want them to distract from the actual models too much. If anyone reading this has used these bad boys on their own models, drop a URL in the comments section. I'm curious to see how you painted them. 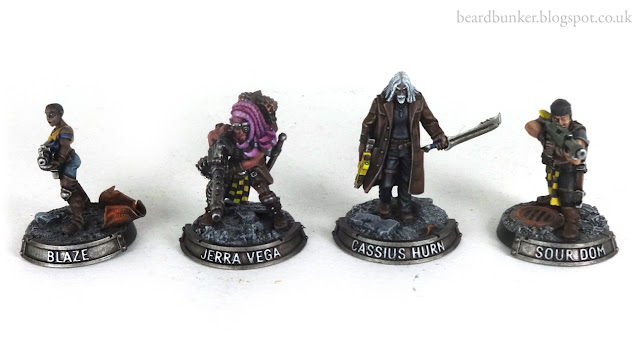