By Jeff July 22, 2019
Greetings! It's getting closer, I can aaaalmost taste it. The kickoff event for our Necromunda campaign is now a week away. As a result I have put aside my xenos bretheren and knuckled down to getting some scenic elements done and ho boy! They are pretty...

There are several schools of thought on terrain in wargames. At one extreme end are the people who see the game as naught but a tactical challenge and are just as happy with a box being a building and a circle of paper with "wood" written on it. It will not surprise regular readers to discover that I - in common with most, if not all, of the bunker dwellers - sit firmly in the opposite camp. So far in the opposite camp that I'm nearly in the next field. I believe that terrain should help tell the story, enhance the aesthetic appeal of models put on it, and inspire scenarios. Mercifully the plastic stuff does that very well in Necromunda. 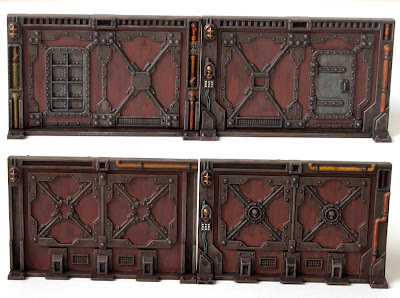 The most basic elements are the bulkheads dividing larger rooms into dinky ones for scenario purposes. Even these are gorgeous. You get two different designs (top and bottom) of wall and they're so lovely I'm seriously considering getting another box of them. Let's talk colours here as there's not much more to say on these otherwise: All the terrain I'm painting with an "industrial" vibe is getting the same treatment. This matches the genestealer cult I'm painting so that it looks like they belong on the table in 40k. Made sense to carry that on with the Necromunda stuff. The painting starts with a basecoat of Ammo Old Rust. Over this is lightly drybrushed Army Painter Gun Metal then a healthy slosh of black wash. Once all this has dried nicely I pick out the panels in Vallejo Primer Red and the doors and other notable features in Vallejo Neutral Grey. Finally details get picked out and the whole thing passes on to weathering.

Ye gods those doors are cool. Just look at the mechanisms on the "inside" of each. Cracking work GW studio. These are a nice canvas to talk about the weathering. It is this that lifts the piece from toy-like cartoon colours into a living, breathing piece of terrain. It's also dead easy in this case. Once all the acrylics are dry (and I mean really dry) I take a selection of Ammo enamel weathering paints and go to town adding little dots of them all over and lines of them under protrubences in the walls. In this case we're looking at mostly Streaking Grime, Winter Streaking Grime, Rust Streaks and Slimy Grime anywhere where water might have gotten involved. Once these harsh dots and streaks are on I blend them with odorless turps and a clean brush. Dragging down to create the rivulets and streaks on the walls. 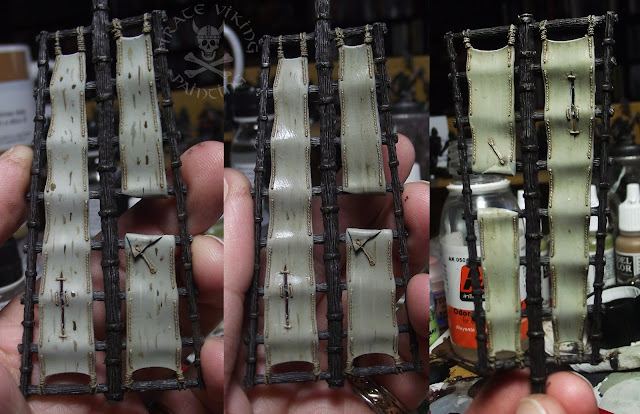 I actually did a bit of a step by step thing on this in my old blog (four years ago somehow) and this photo does a good job of showing how the harsh streaks become subtle, lovely muck. This works because the solvents that disolve acrylic and enamel/oil paints are different, so you can slap enamels over acrylics and be confident that nothing you do to them will affect the paint beneath. You can completely remove them if you want and start again. The only downside is drying time (days) and sometimes a slightly greasy feel to the figure. Oh and they're in no way non-toxic. It is a surprisingly fast technique once you get the hang of it and creates cracking effects for near zero effort. 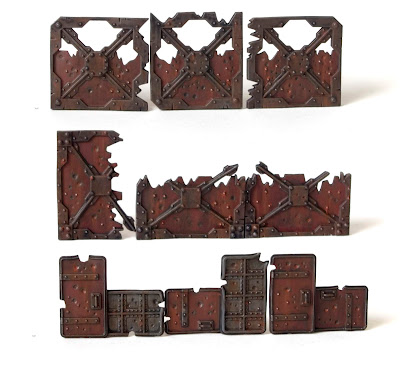 Joining the bulkheads are bits of wall and door that gangers have torn off and use as makeshift barricades. These got the exact same treatment as the bulkheads except for an additional weathering step. An additional one? In addition to all the rest? Seriously? Yup, these ones needed to be rustier, so I busted out my Abteilung oils (light rust and dark rust), squeezed a teeny bit on some card to soak up the excess oil and went to town dotting blobs of oil paint everywhere the rust would have started. Then the same performance with odourless turps. Looks bang tidy if I say so myself.

They're the perfect height for barricades and their improvised nature from stuff that is already in the scenary around them pleases me greatly. It's what I'm talking about when I say "tells a story". These look looted from the immediate area. Most barricade models look like you've trucked in a random selection of materials from miles away to be your special barricade construction fabric. Or something. 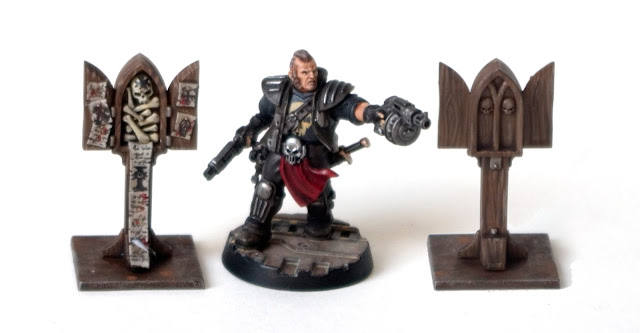 Now. Some of these pieces are very rarely used. Like a little Ecclesiarchy shrine. So why oh why oh why did I lavish so very much attention on this? Because it tells a story, that's why. I figured "this is important, thus should look expensive", hence the woodgrain. I also figured "underhivers, not exactly traditional worshippers"... This led me to a sort of "Imperial Santeria" look. Blending traditional Ecclesiarchal imagery with more shamanic vibes. There's voodoo veves on there, splashes of offering blood, all sorts. Ridiculous level of effort for something that will be rarely used! Stupid Deadpool! Worth it! 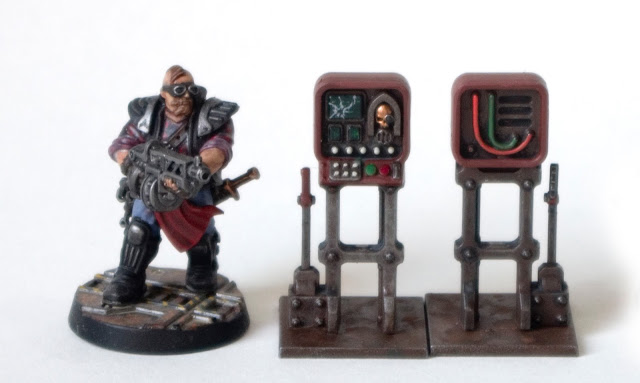 Proving I don't learn from pattern recognition are these terminals. I just had to go and paint readouts on the glass and even "crack" one with black and white paints .Yup. Cool though... 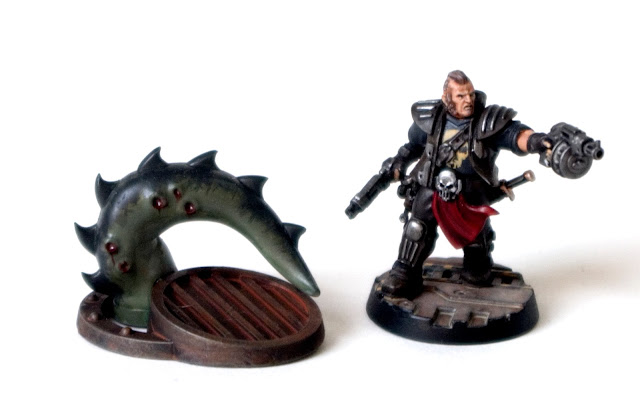 The last member in the trio of "overly painted counters" is the beast lair marker. Did three layers of feathered greens and greys (can't remember which) to make a nice transition from pallid underside to dark spines. It's covered in puckers that are not tentacle suckers for some reason. So I turned these into open sores showing what happens to sea monsters living in the Sump Sea. 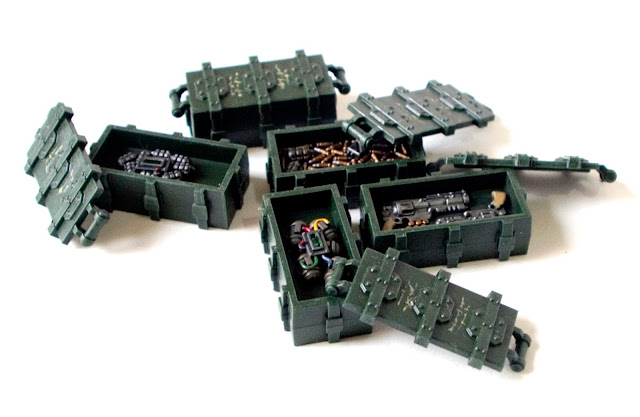 Finally we have what I think are the best designed element of the sprue. These ammo boxes are reversible. They contain either a selection of ammo or a pair of heavy handguns. Flip them over though and they're empty. You can even drop the booby traps in there. Once the lid is on you can't tell which is which. This just writes the scenario itself. Fighting to get to a precious crate only to discover it's empty or worse, full of claymore mine...

And there we have it! I'm not done, not by a long chalk, I'm currently working on several sets of TT Combat Necromunda walls to fill in the rest of the board too! More on that when I get in. Until then, what do people think? Like the look of the enamels? Use them yourselves? Inspired to have a go yourself?