The Forms of The Beast. Genestealer Cult #9 - Patriarchs, Abberations and Familiars

By Jeff January 27, 2020
While the human-ish faces of the Cult are the Primus, the Magos and the other specialists, there is only one spider at the heart of this web. The originator of the horrifying infection that sparked the growth of the Cult. The Patriarch.


The Patriarch was the original Genestealer to arrive in the area. In the case of the Starborn Souls it was curled, alone and hidden in the hold of a supply ship restocking Ortag Imperial Mineral Exploitation facilities. From this lithe purestrain, as time went on, grew the bloated, psychic monstrosity that is the Patriarch. 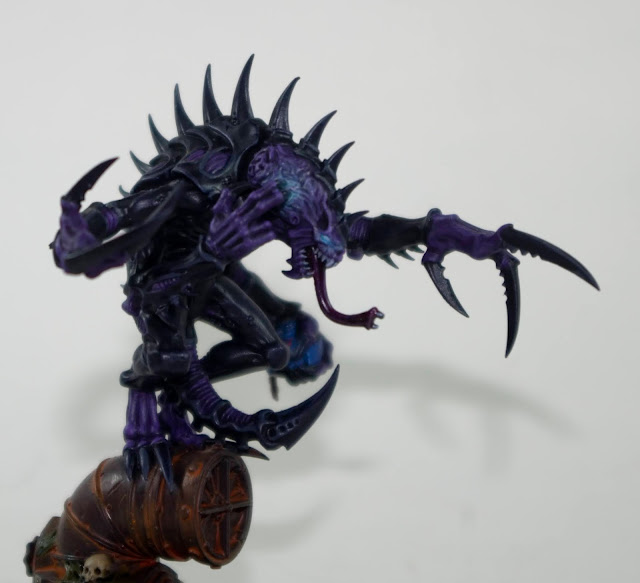 Given that I had established the colour scheme of the Genestealers time and again I did not need to put much thought into the Patriarch other than increasing the number of highlights. The main point of interest is the psychic glow. I wanted to emulate what the studio had done because it looked so characterful. I love the idea of this monster, more than capable of ripping you in two, being most dangerous because of its mind. To pull off the glow I just used several thin glazes of white mixed with a teeny bit of blue ink. I made sure to make each successive glaze cover less area so the glow seems to emanate rather than being constant. Finally I painted the eyes pure white to make for the intense light source. 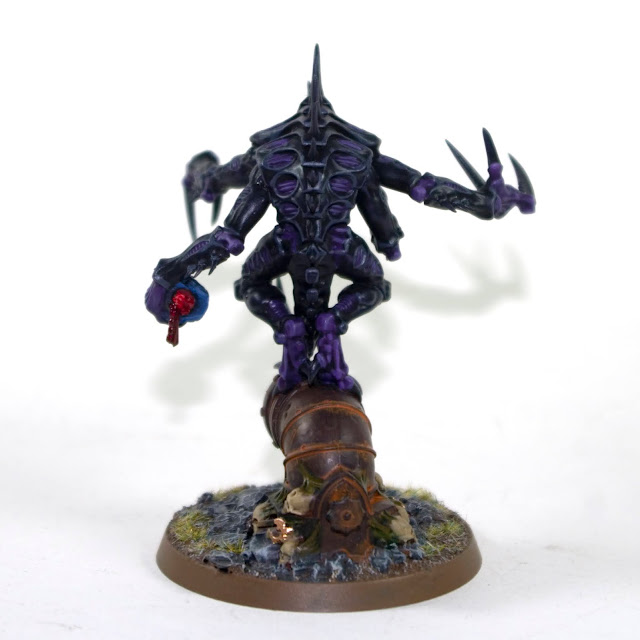 I love the detail of it's back. So much better than just big smooth sheets. Oh, and the goo-ey mess it's holding in it's left hand. Yeah, that's a Cobalt Scion. Because reasons... 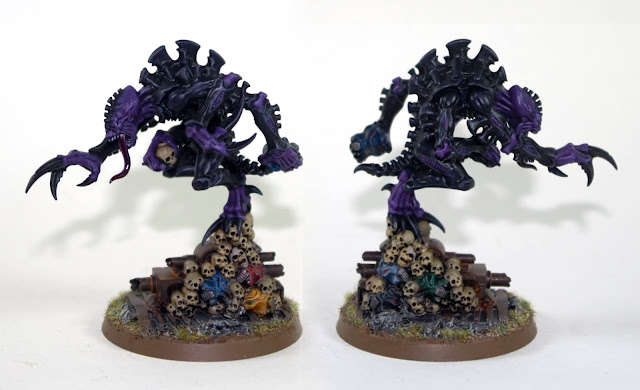 Now, about the whole two Patriarchs thing. To be honest, I painted this one because I had it. It seemed wasteful not to. I imagine it will almost never be used. The one time it would be is if the Patriarch died in a narrative campaign and another Genestealer was raised up. This would represent that younger Patriarch, different warlord traits and all that. Oh, and keeping up the whole "friends' armies in trophy piles" thing the ridiculous number of terminator heads festooning the base are painted as Crimson Fists, Cobalt Scions, Salamanders, Raven Guard, Space Wolves and my own Blood Angels and planned Imperial Fists.

But Patriarchs are not the only form of the beast I have painted this time, oh no. In addition to painting another 15 Purestrains (not pictured because seriously, you'd struggle to tell the two images apart from the previous squad. Go have a look here and assume you are looking at these...). I also finished off my "When good Hybrids go bad" squad: 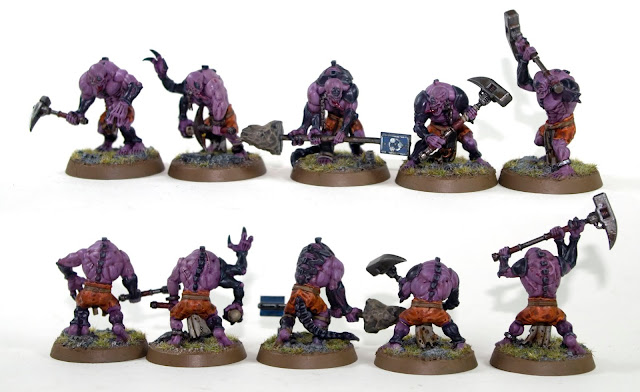 By adding a box of Abberants I was able to make either a squad of 10 or a couple of smaller 5-"man" squads if I felt like it. Plus I got the excellent hypermorph with the best weapon in the squad. Literally a street sign ripped out of the ground. Well done sculptors, golf clap, wonderful work.

I'd had these knocking around and so painted them at the same time as the other Purestrains because all the paint mixes would be the same. Included in these is the Biophagus' little buddy, the Alchemical familiar. Carrying a flask of SCIENCE that has been somewhat unwisely uncorked and wearing adorable personal protective goggles he is seriously the cutest Genestealer in the Cult.

With that I shall leave you. We have reached the dark heart of the Starborn Souls and there is light at the end of the tunnel. Rest assured there will be more soon. Until then...