Today we have the second part of our showcase of Mark's massive ork army (catch part one's Bad Moons here). We've got moar konversions to share, plus also some comedy notes on the making of at the end. This penultimate episode could reasonably be titled "da uvver ladz," since as the above group shot indicates, it covers the smaller factions that Mark dabbled in.

I say dabbled... he embarked upon a full army of Blood Axes. It has some amazing kustom vehicles, most of which he didn't finish. In the cabinet* in which his armies are kept there is an entire shelf of 80% finished models. That Mark was an itinerant dabbler in many concurrent projects wasn't news to me, but I had no idea how deep the rabbit hole went. All the projects within a stone's throw of completion have made it to the cabinet, such that we might one day help them over the finish line.


We made a point of keeping unfinished things out of this showcase, though. As amazing as the kustom artillery, trukks, boyz, blasta-bommer and kommandos might be, they will for now have to serve as a cautionary tale to the rest of us: finish your stuff, or leave your nearest and dearest with absolutely no idea what to do with your WIP cairn.

And now for some kultural tokenism: the Snakebites, Evil Sunz and Goffs are represented in Mark's collection by only a single unit each. As an Evil Sunz player myself I do of course find that completely preposterous, as Evil Sunz is clearly da best. The Goffs (at least, I think they're Goffs, but they might just be miscellaneous orks...) are your classic mob of 30 lads, and the Evil Sunz are your classic biker gang. The Snakebites, however...


With those light entrées out of the way, let's talk Blood Axe. In usual orky fashion, these Blood Axes have understood the value of having camo, just not the importance of having consistent camo. 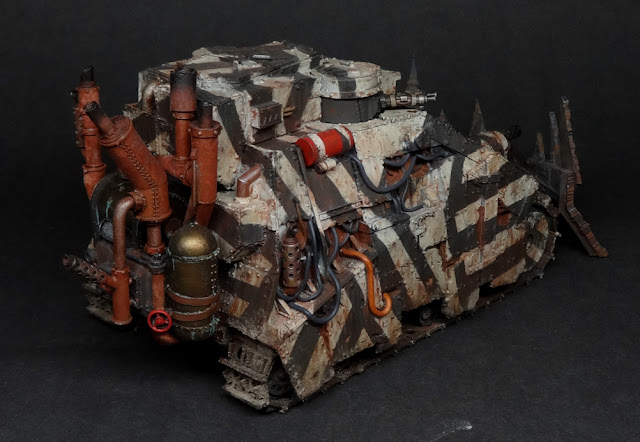 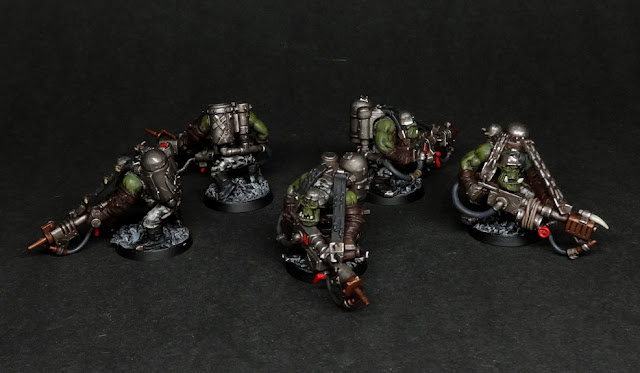 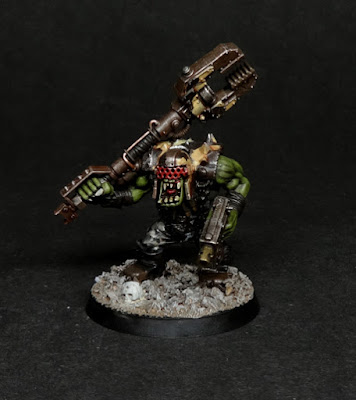 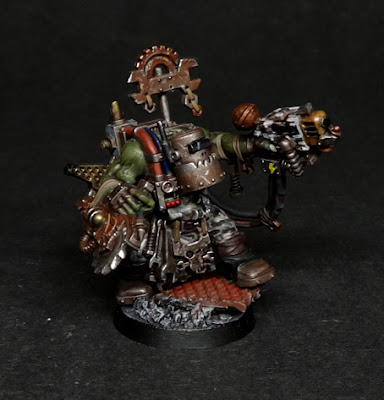 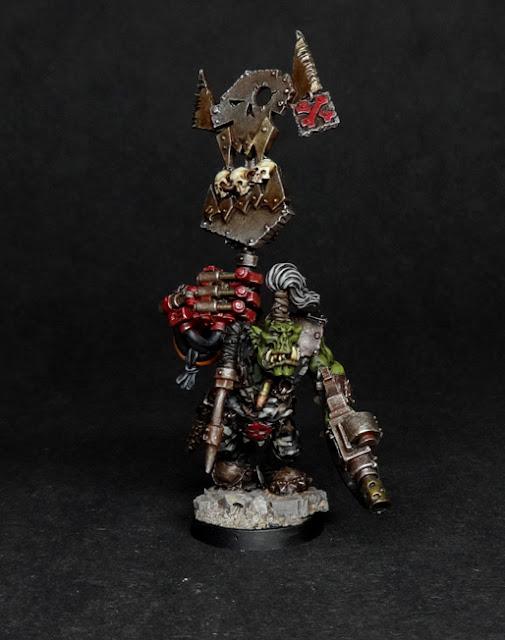 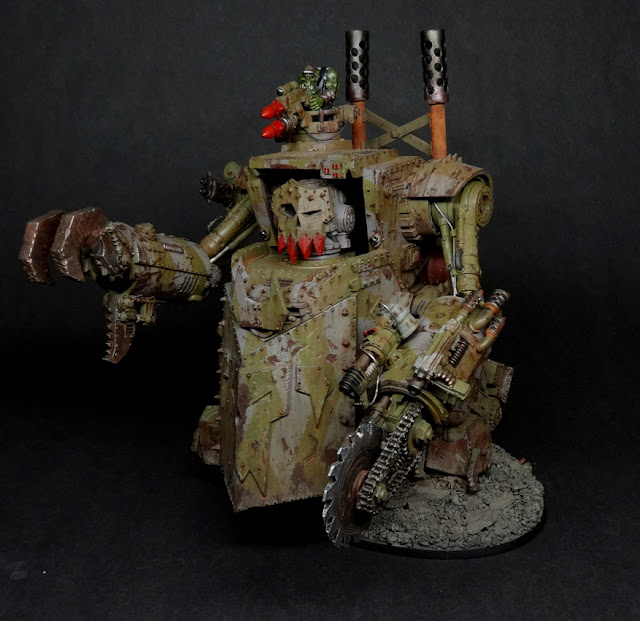 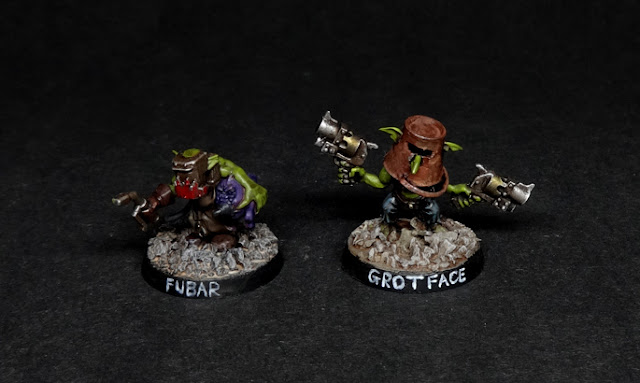 OK we need to talk about these gretchin. FUBAR is just a lowly grot oiler who has yet to pass any of his workplace competencies. Grotface, on the other hand, is... wait for it... a roleplay character.

The first RPG Mark ever ran was set in Orktown. Most of the players were orks trying to find their stolen trukk. Tom, however, played whichever unlucky gretchin the orks had most recently collared. Given the astonishing rate of attrition, the ork players just referred to Tom's current gretchin as Grotface. If memory serves, Tom was playing Grotface the Third by the end of the first session. I forget which Grotface ended up wearing a bucket, but he was the bestest Grotface, and spawned many romantic novels (most infamously The Grot in the Iron Bucket by renowned Weirdboy Volt Hair).


Major Ordnance and Sergeant Nibbles: one boss and his squig, herding his tribe to the promised scrap. Brings a tear to me eye, it does. Actually it kind of does, since this warboss conversion was actually something I did some work on. Mark was an absolute boss at converting mechanical parts, far above and beyond anything I can do, but didn't have much experience with sculpting, so asked me to sculpt kunnin' hats for da Major and his pet.

When you really look at them, peaked caps are quite complex shapes, and I felt like I might have over-promised. At the least, I was expecting to have to do it in several sittings to stop things squidging or sliding around. Surprisingly, though, it went on in one hit. Before the primer went on, the boss looked like an orky Luigi.

The group shots, how they was done, and who done 'em

Taking pictures of an individual unit is easy: stick it on a curved bit of paper, point a decent amount of light at it, and take a picture. Do some cropping, white balancing and resizing in Photoshop, and boom, that's it.

Decent shots of a whole army? Sweet baby Jesus on a little squeaky tricycle. It's too dark, or it's too blurry, or more commonly both. It's doable but I'm often disappointed with the results compared to the shots I can get of individual minis.

So, I knew I wanted to do a good showcase of Mark's orks, but had no idea how I'd get a shot of the whole army. Then, at Mark's wake, a stranger approached. "Are you Charlie?" the stranger asked.

"Yes?" I responded, apparently in the throws of an existential crisis.

"I'm Boris. I do photography. Mark asked me to help him take photos of his army."

Delicious, I thought. About both the photography, and Boris' lustrous mane of hair.

Of course before any photos could happen, we needed to sort out Mark's hobby workshop nest: a mammoth task which a number of people have pitched in with, most notably Maisey (cheers again, dude). Thankfully, Mark left instructions about what to do with his hobby stuff. I strongly urge everyone else to do the same. My plan is to have a folder in my house labelled "Open in case of Charlie being very dead," and then tell people where to find said folder, and also share a folder in Google Drive in case the cause of death is a mild case of Exploding Firey House syndrome.

Eventually, we had everything in one place. A date was set, and Boris drove down to Oxford equipped with hench photography gear.

Our backdrop: both ghetto and ludicrously high budget.

Any photo this big needs some sort of backdrop. Sadly, I didn't have one. We had to make do with the biggest plain objects I had to hand: three Realm of Battle Boards. Since that was already three comically expensive objects in play, I doubled down and used... I don't know how many pounds' worth of GW books to prop up the STRUCTURAL PLANK.

Those things on tripods in the photo above are flash bulbs set into diffusers. They link up with Boris' camera. It was very important to avoid looking straight at them when he took a photo.


The original images he took are absurdly high res. Far too high res for Blogger, in fact, but there's a dropbox of some of the group shots here for the curious.

The photos are technically composites; Boris would set his focus to different distances, then stitched the photos together so that everything's in focus. The end results are vastly superior to anything I could have managed. This is his first time photographing miniatures, and fair play to him. Boris' face meltingly pretty portfolio is well worth checking out, unless of course you don't have eyes.

We've definitely underused his talents, given that the primary purpose of these group photos was to illustrate rather than offer cinematics, but he seems to have enjoyed the challenge; we may yet get him back to try taking some more atmospheric shots of the Beard Bunker's population of tiny things.

Next week is the final part of the showcase, and it'll be covering the Deathskulls. Expect kustom battle wagons and other glorious conversions.