By Jeff February 17, 2020
One of things I love about playing as a Genestealer Cult is the insurgent feel. You aren't using too many military things, you're bodging together weapons and turning tools into instruments of destruction. Well, there isn't any bodged together instrument of destruction more destructive than this bad boy. Behold the Rockgrinder and despair! 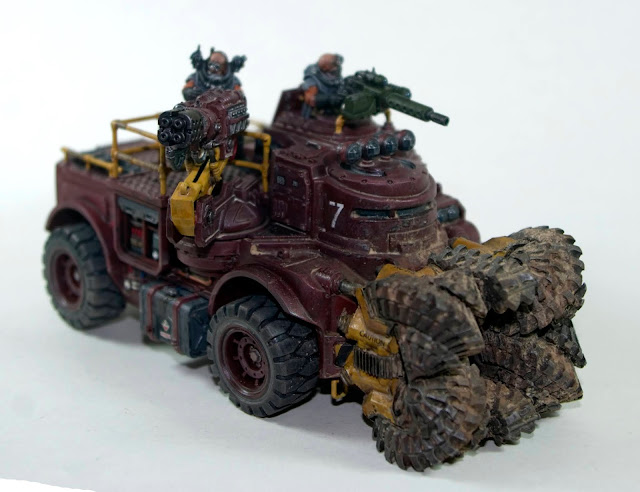 Now that is a Goliath Rockgrinder. The one that you get in the kit is a bit... Well it's silly if I'm honest. It's just a big dozer blade with spinny saw blades serving no discernible purpose. I know they did the best they could with the limitations of space on the sprue but... I didn't like it. Wasn't going to include one in the army despite how funny running over someone with effectively a woodchipper on steroids would be. Until I remembered: I had a Hades breaching drill knocking around. Aeons ago I bought a Hades from Forgeworld and the one they sent me had two left tracks. Instead of sending me the right track they just sent another. This meant I've had a spare boring head in the "useful one day" box for years. THIS WAS THE PROJECT IT HAD BEEN WAITING FOR. 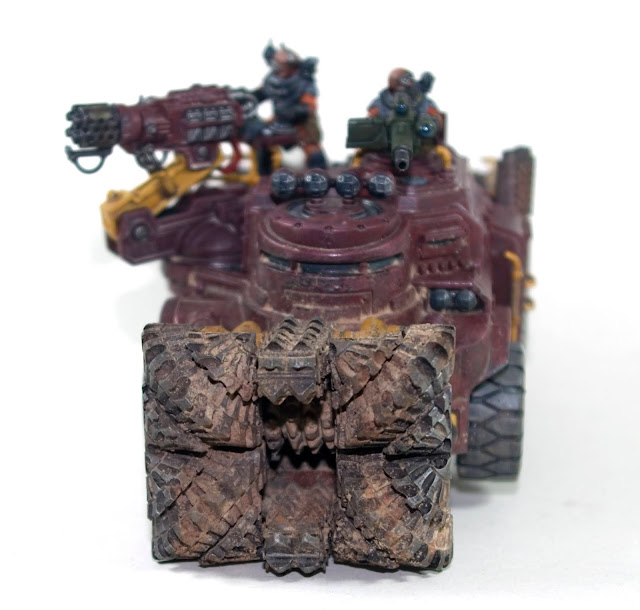 To disguise the fact that there wasn't any further machinery in there I glued a stack of the Drilldozer saw blades into the back of the boring head. It now looks like the rubble is further processed before being passed on to the back of the machine. While we're looking in glorious close up I should probably mention that the paint effect on the Rockgrinder is formed from layers of weathering pigment over dark steel. The dry pigments are fixed with Ammo Pigment Fixer, basically enamel medium. A bit like Lahmian medium, the thing that makes paint paint rather than a pile of coloured dust. Helps to prevent it rubbing off while leaving the wonderfully dusty vibe intact. 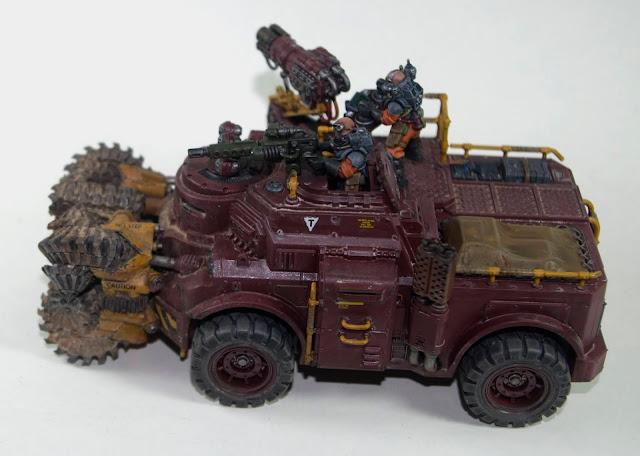 Talking about painting, I wanted to continue the Ortag Imperial scheme that I had established with the Ridgerunners and Sentinels. Namely, Vallejo Primer Red with a bunch of yellow safety rails. Combined with the crews being in the same standard colours as the rest of the army it's resulted in a delightfully coherent look for the whole thing. Especially when combined with scenery in the same industrial colours (more of that soon). 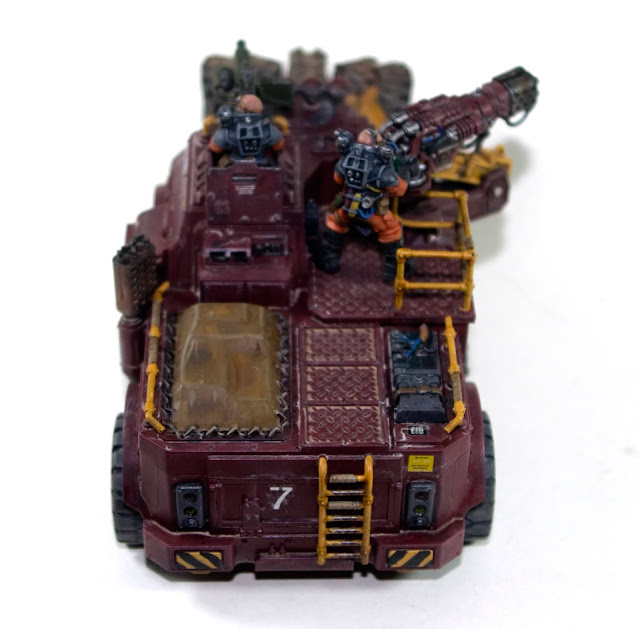 I'm really glad the studio made this back section. Combined with raising the suspension on the Rockgrinder (had to, there wasn't enough clearance for the Hades otherwise) it really makes the Rockgrinder look like a bigger version of the same basic chassis. Too many of the variant vehicles look too much like the original version. This was brilliantly done. Plus the tarp is great.

Speaking of the basic chassis... here they are. A pair of Goliath trucks ready to zoom around and carry my nastiest combat troops in close and personal. Hopefully you can see what I mean about a similar but different model. 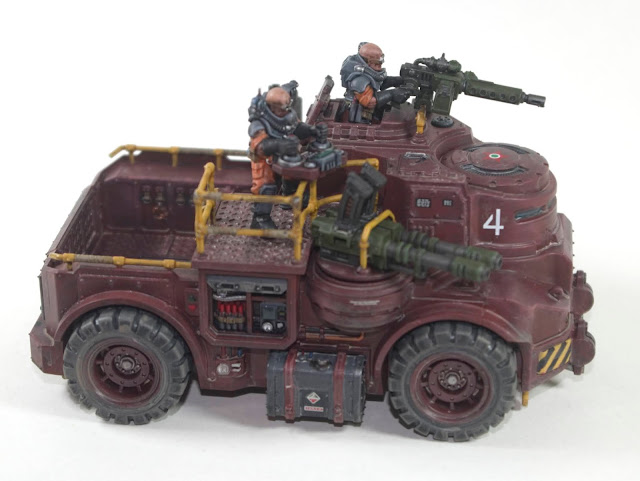 Now, a word about armaments. This photo shows the classic form the Goliath is supposed to take in the codex. Two armour-piercing military cannons fixed to a civilian vehicle. We at the beard bunker think this is a smidge silly in an army that uses mining lasers and seismic generators as weapons. But I wanted the option to be codex legal so... here they are. But, with the aid of SCIENCE (magnets) we can do so much more... 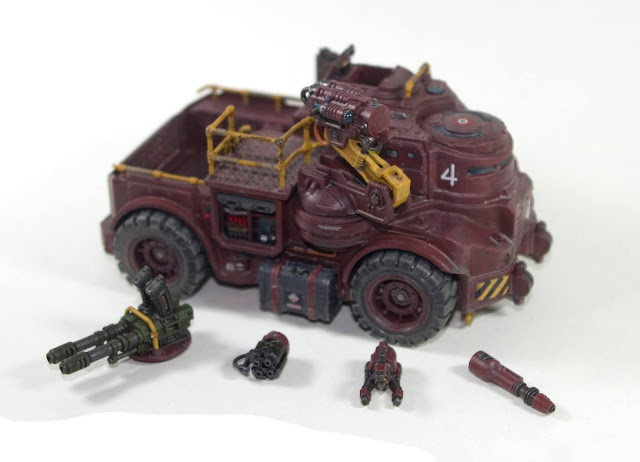 I can swap out the autocannons for the manipulator arm, which is then magnetised to take all three of the Rockgrinder heavy weapon options. If my opponent is ok with it I'd much rather use the more characterful Genestealer Cult weapons. But if not I can just drop the autocannons back in and get 4 S7 shots a turn for some reason. But wait! As you might have noticed the crew are gone too which means, there's more: 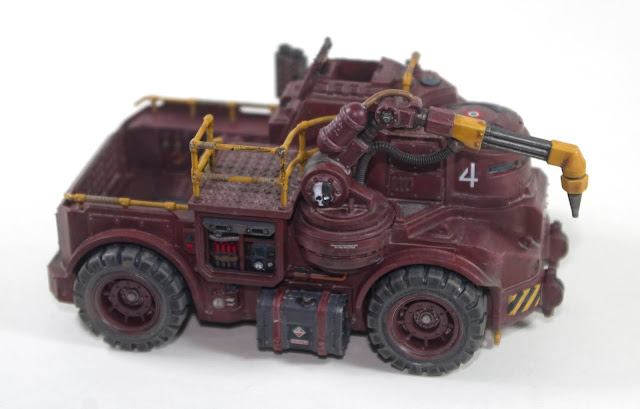 I realised that having the mounting point magnetised meant I could make pure civilian versions
of these vehicles. For use in scenarios or just as terrain I can have them with no Genestealer crew, no weapons. Just a truck with a manipulator arm. Doesn't it look cool? I'm so happy with how this turned out.

Just like the Ridgerunners, a big part of the civilian look is the sheer number of random decals giving warning labels or instructions to the crew on how to use the vehicle. I mean, look at those fire extinguishers, without the label they wouldn't be half as awesome. If you look at some of the other shots these are everywhere. I'm especially fond of the fake Prometheum company logo on the fuel tanks. These are all - with the exception of the numbers - from various scale model kits I've bought over the years. It's really worth taking a look at the military modelling world from time to time and seeing what we can pinch for our bit of the hobby.

And unbelievably. That is it. I've painted all that I planned for this army, you can see all the articles here. The workometer is all green. It has taken a little under a year to get everything painted (nearly 3k) and I put a lot of that down to just how inspirational this range is. That and I made a bargain with Satan on a crossroads in Georgia a while back. I'm probably not done with 'Stealercult: With the Kelermorph finally coming out I'll probably get him and the Locus to act as Necromunda gang leaders and for completionist purposes. I'll probably pick up a Tectonic Fragdrill for much the same reasons. Oh, and there's a Brood Brothers contingent in my mind's eye that will definitely get done at some point. But I think I need to stop for a bit. Burnout would be sad at this point and I'm ready for the next project.

There will definately be a whole army photoshoot at some point so I can squee with glee at the sight of the whole entire Cult out on a table but that will require me being in Oxford and having time. What will that project be? Well, I'll keep it close to the vest for now but rest assured: I am not done with being bad guys or cults yet. Not by a long chalk... For now though, some quick wins, a kill team project, some more Necromunda and the like. Until then lovely people...