Leaders of the Pack. Genestealer Cult #10 - Magos, Abominant and Iconward.

By Jeff February 10, 2020
It has been noted that I have something of a completionist impulse... the fact that I nearly own all of the available figures for the Genestealer Cult range maaaay have led to buying some more (and will almost certainly lead to me getting a Locus and a Kelermorph at some point) and among them was the technically unnecessary but oh-so-pretty new Magos: 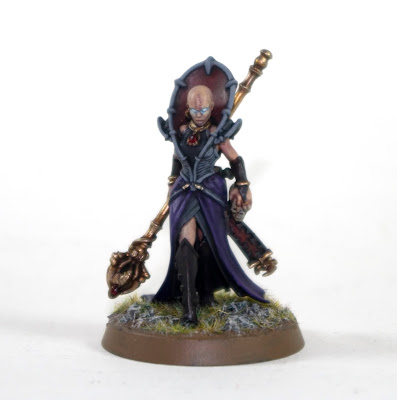 I mean just look at her. She's incredible. How could I not? But now I have two Magi. Magoses. Magos'.... I have two. So it's time for some Lore. My two Mag... the pair of Magos I have in my army are twins. Both born to an unsanctioned psyker caught up in the cult. The pair whispered in her mind as they grew within her and learned all she could teach them through gestation. Though she did not survive the birth - the twins were hungry and her psychic essence was too near and too strong - she had instilled in them a preturnatural knowledge. Old before their years the pair were destined for greatness. Of the two, Salome is by far the stronger. Her brother Estrus is a gifted psyker but for whatever reason it was Salome who rose to be the spiritual leader of the Starborn Souls. She carries her mother's skull to keep her close and the fell light of the Patriarch's intellect fills her eyes as she casts. 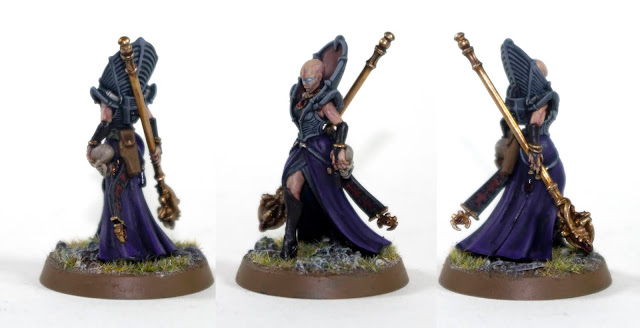 Painting-wise I needed to give this a lot of thought. She's actually a really complex sculpt, layers of overlapping clothing mean you have to figure out what belongs to what. I also had to figure out how to differentiate those layers without adding too many colours. I'd already established the purple robes on her brother so the outer skirt made sense to do that. The predominant colour would therefore be purple and the grey/red suit. The underdress looked so little-black-dress that I just ended up going for it. Prevented adding another colour and made for nice shadows. On a whim - and because she already looks badass striding forward like that - I thought I would use the same glow as the Patriarch. This is done in exactly the same way, glazes of light blue and pure white eyes. Looks like she means business. 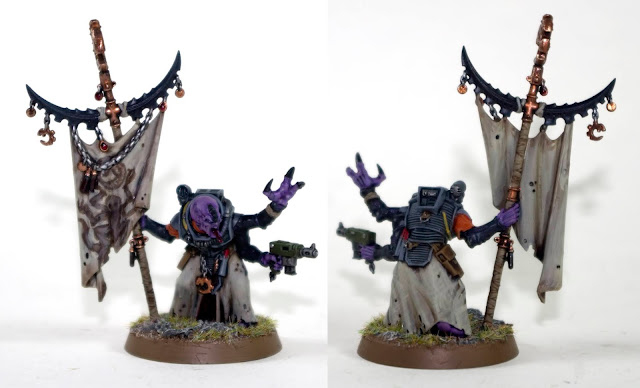 Just as Salome is the spiritual centre of the cult, the charming gentleman above is the visual centre. The Iconward carries the banner of the Starborn Souls, allegedly the swaddling clothes that the Patriarch was dressed in when it arrived with the First Family. Now branded with his psychic essence - or careful melta-torch work if you are cynical - the shroud bears a miraculous image of the Patriarch handing down the Seed of the Starborn to it's children. The Cult fight all the harder in it's presence. I did a few minor tweaks to this model. Most notably fixing the ridiculously vast finial at the top for something a smidge more restrained. I don't have any icon bearers in the army so this one being a bit more restrained will be fine, it'll still stand out.

The final member of the leadership team is by far the lumpiest. This big boy is the Abominant. Leader of the Abberants and technically - because of the little dude at his side - capable of leading parties of the Starborn Souls into battle. Borrowing the Patriarch's insights he can make a reasonable go of generalship, even if his most rousing speech is "rawwwwgh". I adore this model. From the dungarees, to the spavined little extra arm to the wonderful back detail. He's incredible. He is also a nightmare to photograph so I'm a little miffed that I couldn't get better shots than this, but celery bruv, cel-er-ey. Believe it or not, with these models finished I am just three models away from finishing the army. But they are rather large models. Goliath type vehicle models. Coming to a blog near you soon. Until then...