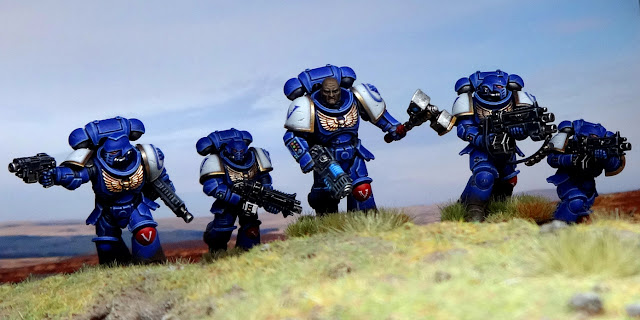 This is going to be one of those posts which is really four separate posts too small to exist on their own:

Adding background images to your photos

This is comically simple: load a suitable image on your PC's monitor, put some scenery and your dudes in front of your PC monitor, and take a photo. Bonus points if you do a better job than me of matching the lighting levels of the minis versus the monitor.
This essentially gives you infinite backgrounds, and in retrospect I've no idea why I didn't think of this sooner. Particularly given that it's now been months since I saw a video on how they shot The Mandalorian by filming the actors in front of a giant screen playing footage of the background.
Obviously this won't work for big wide army shots unless your monitor is huge. I guess if you have a giant TV with good enough resolution, or make sure the background goes slightly out of focus to conceal the pixels, then that could work.
Here's a shot where I've done less cropping so you can see more clearly what's going on: 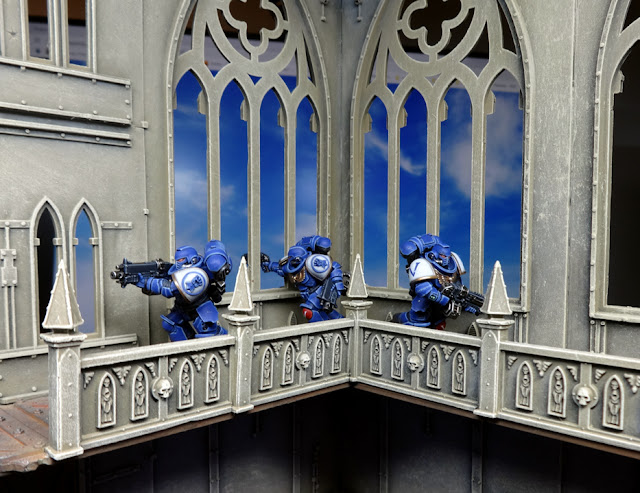 This being 40K, trying a darker, moooodier ambience was obligatory. Sadly in the photos that came out best, the background is little more than a blur... but even then, having some tonal variation rather than black immediately helps sell the effect: 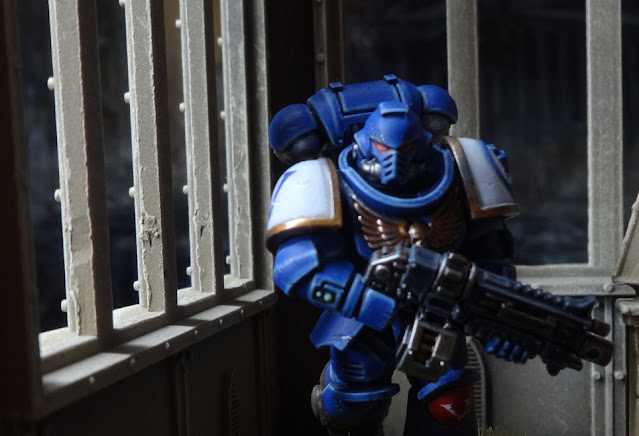 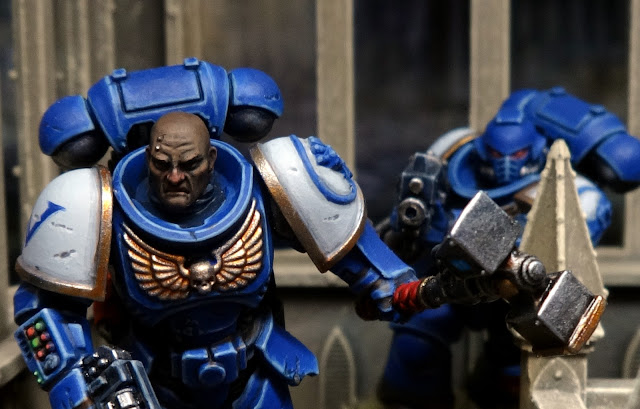 Moooody. It amuses me how the different lighting angles somehow allow Sergeant Cassander to look angry as hell in one picture and adorably concerned in the next.

It will come as no surprise to anyone that these kits are very compatible with each other. I personally did this because I wanted additional visual differences between this unit of auto bolters and my bolt rifle squads. These guys are there to charge up the board spraying and praying; I wanted them to look like they were getting after it. The option of swinging a thunder hammer is also cool, I guess. 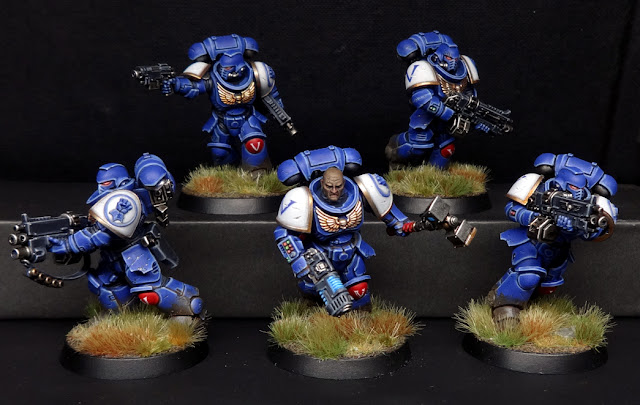 The only thing to be aware of is that the tassets on the assault intercessors preclude the ergonomic placement of the intercessors' pistol holsters and pouches. I managed to get a few on there, but in less than ideal positions. Obviously this is the most minor of issues; it's not like you have to stick those bits on at all, and where it didn't work on a specific mini, I skipped it. Other than that, everything worked without any trouble. 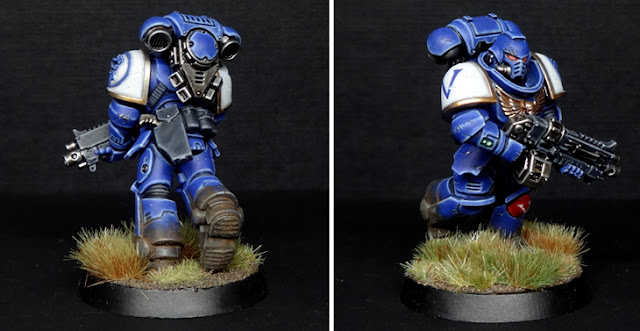 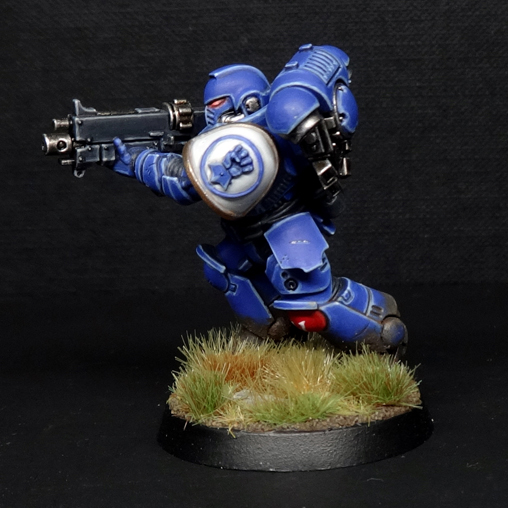 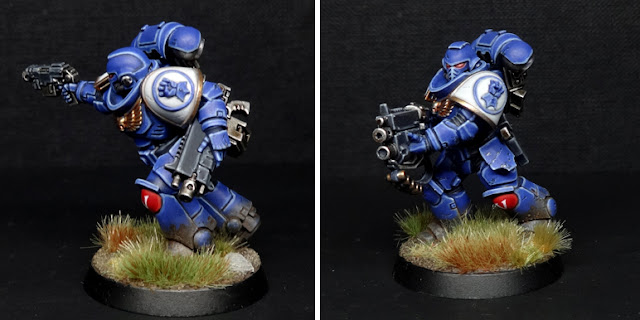 Another thing to note is that the Assault Intercessors kit goes together extremely easily; the legs don't have those separate shin plates on the regular Intercessors sprue, and unlike the Hellblaster sprue, seem to sacrifice no sharpness in doing so. It's a beautiful kit, and gets extra points for having something like fifteen heads on the frame, which was clearly done so that you won't have to repeat a single bare head in your army (unless all the dudes in your force have a chronic helmet allergy).

I've got decent colour recipes for tanned and pale Caucasians, as well as very dark skin. It's the tones in the middle that I haven't quite gotten down, so that's what I decided to experiment with for Brother-Sergeant Oreas Cassander here.
A lore reminder: these guys are Ultramarines successors, which means their original recruits were drawn from across the realm of Ultramar, and are therefore quite ethnically diverse. In keeping with the theme of Romans in Spaaaaace, I've tried to have a mix of skin tones that would be consistent with some of the many ethnicities encompassed by the original Roman Empire. 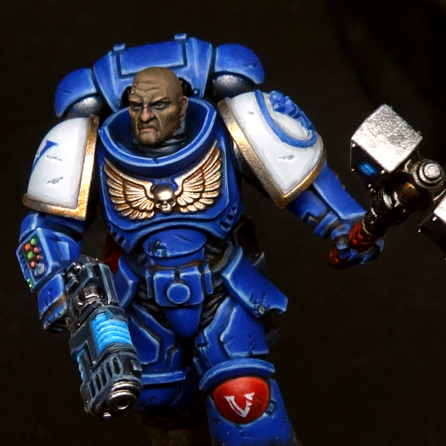 I started with a basecoat of Vallejo Burnt Umber, but you can only see that in the deepest recesses; I layered up by mixing in increasing amounts of Vallejo Beige Brown, mixing in Citadel Cadian Fleshtone and finally Kislev Flesh on the highest points.
A thin glaze of Army Painter Deep Blue was added around the eyes. A glaze of Army Painter Matte Black was added for stubble, although it's thin enough that it's not all that obvious! Finally I added a very thin glaze of ye olde Citadel Red Gore to the nose, lower lip, and ears.
I had earlier tried to make a similar skin tone with Citadel's Gorthor Brown and it just ended up looing flat and lifeless, I think partially because there's just not enough yellow in it. It's crazy what a difference a tiny shift in hue makes when you're dealing with skin. Attempt #1 originally appeared in the step-by-step on how I paint the blue armour.

Thunder is cool. Hammers, also cool. Thunder hammers: yes. Thunder hammers in an army of Space Romans? Not obviously thematic. Here, then, is the story of how Oreas Cassander first discovered the joy of hammer time. Brace yourself for maximum shooty-death-kill-in-space.
+ + +

The Spur of the Moment 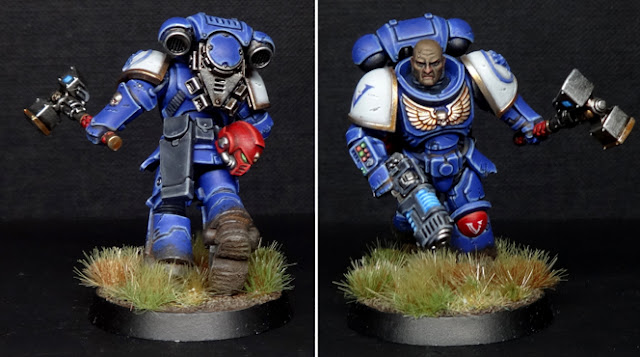 Hopefully at least one of the four bits of that post was entertaining! In particular I hope the story was amusing; I basically wrote it this afternoon and gave it the quickest of editorial passes. Normally I'd let things sit for a few days and re-edit, but sometimes you want to blast something out. That... sounds more digestion-related than intended.
I'm getting to the end of the Cobalt Scions project. Just an Impulsor, a lieutenant, and possibly a squad of Bladeguard Veterans left to do, then that'll be all she wrote. I'm extremely over highlighting blue armour at this point, but still very happy with how the army's turning out and dreaming of the day we can play games again.