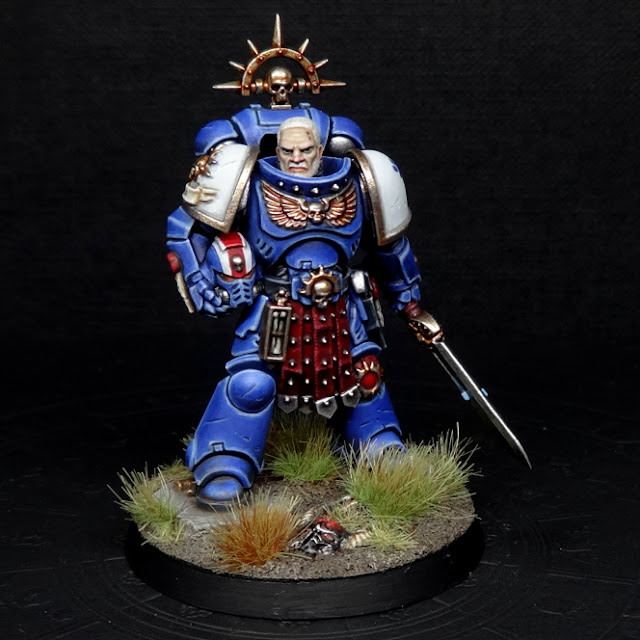 This will be the final entry on my Ultramarines Successors, at least for the time being. Today's post will go over the conversion of Lieutenant Amulius (the modelling process, not the religious experience), then the painting, then a brief bit of lore on him, and finally some thoughts and photos on the army as a whole.

TBF this barely counts as converting, but I'm pulling this on the technicality of there being a tiny amount of sculpting involved. Beyond the headswap (the head's from the Assault Intercessors kit) I also swapped out the medieval-style power sword for a sword from the Deathwatch sprue, since it looks way more Greco-Roman. This meant snipping the original blade off, then pinning the new one in place. The wire was only just narrower than the sword's grip, which added a little spice to the endeavour.
Once the new blade was firmly in place, I sculpted a new stretch of grip, and boom, you'd never know it was a conversion. Hopefully. 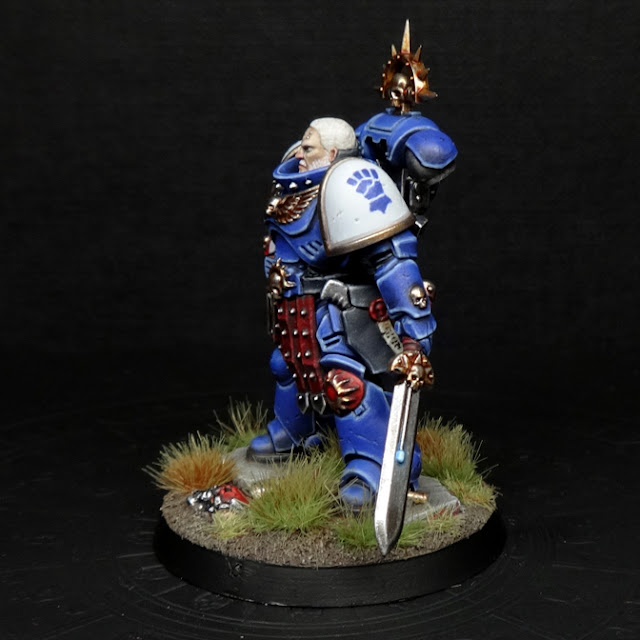 I've gone over the recipe used to paint the blue armour here, and covered how I do the rest of it here, so I won't repeat myself. Instead, I'll focus on the methods and paints used to do the hair and skin. The head was primed with Citadel Wraithbone spray, then basecoated with #twothincoats of Citadel Rakarth Flesh.
Old, pale skin
White Hair
So the thing about white hair is that it really is very, very white. However, if you put pure, brilliant, neutral white on a model, it can look a little too harsh. Besides, if it's short hair, you'd expect some of the skin to show through the hair. To emulate that, the hair starts with the same colour as the skin: Rakarth Flesh. After that, it's dots and lines in Pallid Wych Flesh, slowly layering up over the scalp and beard. After that, some dots of Corax White just to get some grey in there, and finally, Army Painter Matte White on the bits you want to emphasise - in this case, his chin, moustache, and his tiny tiny quiff. 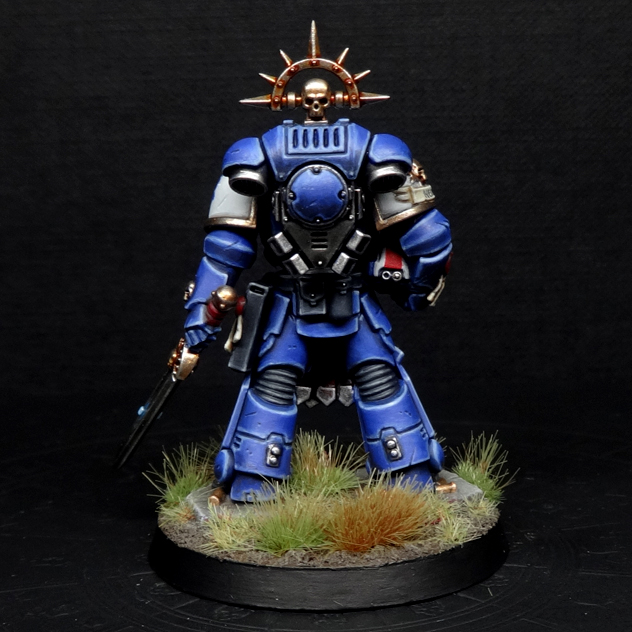 Who is Antigonus Nerva? 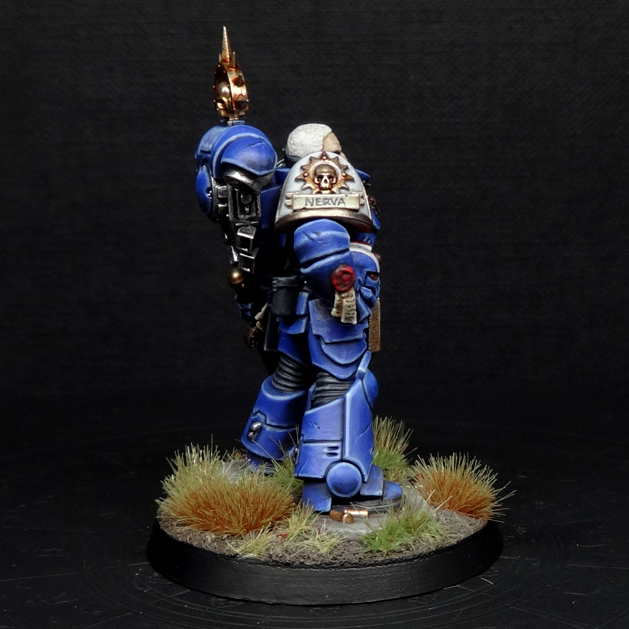 This is the first time I've painted a whole army to what is, for me, a high standard. Normally I find ways to keep things quick and simple with the troops and really focus on characters, and a few standout details to distract the eye from the utter slackness of the bulk of the minis (commonly known as the normal and sensible approach). Here, then, after a year and a half of consistent effort, is a shot of the whole thing:
Higher quality could have been achieved by taking even more time - to really get some nicer fades on the edge highlights, and introduce more layering to enhance the light and shade - but I think this is about as high as I can push the quality on an army-wide level without going insane.
I've also gone into an unusual amount of depth on the army's lore. There's so much of it I haven't even put it all on the blog for fear of jumping the "let me tell you about my D&D character" shark. Maybe I'll go completely insane and make my own Index Astartes with full layout and everything at some point as a way to showcase all that material, but for now, most of it's on the Beard Bunker campaign wiki.
Like any test of willpower it's been difficult to stay this focussed, but all the more rewarding for it. I might do more units for them one day; I've got a few ideas of how to do a squad of Bladeguard Veterans, and I feel like adding more Intercessors would help balance it out, but for now I am extremely sated. I hope you've enjoyed following along as the army's grown. Suffice to say, the next painting project will be significantly more loose and scrappy!
Finally, I'll end on the thing that makes my inner grognard (lol, "inner," as if) absolutely full of glee: painting Antigonus has completed the five man command squad at the centre of the battle pile. I've made a point of putting together a whole command squad who aren't in combat poses. These are imperious bastards; they're not leading from the front, they're standing back and keeping it all extremely organised, only wading in at the last moment. I wanted gravitas, not fury. And I want Space Wolf players to look at them, roll their eyes, and mutter "typical ----ing Smurf" under their breath.