Defiler of The Word

Welcome, fellow devotee of the Dark Gods! I've got quite a large project for you today, however, to quote Gimli "It still only counts as one"... 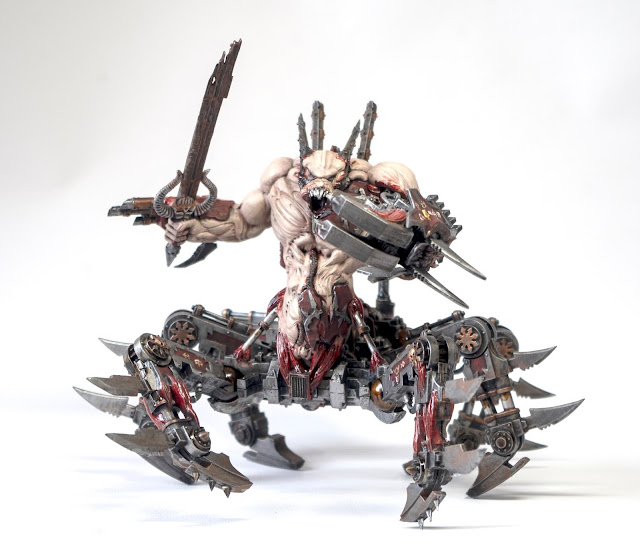 Yep! It's Daemon Engine O'Clock again! Now, the genesis of this model needs a little explanation so bear with me... Long ago (seriously, like 9 years ago) Charlie and I were running an Inquisitor campaign for some of our friends. We needed a finale and decided to scare them. Perhaps to death. We bought a pair of Soulgrinders and painted them in secret - in Slaanesh purple - to have burst from the ground. Let me tell you, even at 54mm scale these things got a reaction [evil chuckle]. Mine then sat on my shelf and became roughly 70% dust. Fast forward to 2021. My Word Bearers are primarily an infantry based army. In the lore they prefer that and, bluntly, I'd already painted a huge Blood Angels force that contained a lot of vehicles. Didn't fancy doing that again. So I figured that just having all of the available Daemon Engines in the army would be suitably Word Bearer. That left just one problem: The Defiler is, let's be nice about it, showing it's age. Compare it to the Venomcrawler and you have no real contest. At this moment of doubt, a very dusty ball of spikes tapped me on the shoulder and asked, "what about me boss?" Needless to say... I was sold.

Now, the painting was supposed to be a quick "easy in, easy out" task of cutting in all the armour plates with the new Word Bearers colours. Hmm, given those italics I suspect you already know what occurred... 32 year old Jeff had painted this to a deadline and sliiiiiightly hastily. The skin was really nice and thus it looked fine, until I started repainting it. Then the war-crime that was the metalwork was revealed to 41 year old Jeff and let me tell you, he was miffed with Past Jeff. So I sighed heavily, cursed my younger self and got on with the task of near enough completely repainting this beast. Only the skin survived. I'll talk about some of the nifty details later but for now, I think it's Lore O'Clock, so as usual I shall turn us over to Sorcerer Orcus Kairon to explain how a Defiler ended up as, well, this...

"...so as I was sayi..." [ear splitting roar obliterates all other sound]. Kairon sighs. "Oh, it's that time again. Hmm? Time to feed Quashric. I may as well introduce you at the same time, from a safe distance of course. So yes, mortal, behold Quashric Hellstriker, Defiler of Chaos. 'But Lord Kairon,' you may ask, 'that does not not seem in form as other Defilers that I have laid my eyes upon.' and you would be right. What stalks before you, straining at its chains as it's sustenance is led, weeping, into its pen, is the result of letting incompetents do your job for you. That was supposed to be a normal Defiler, turret sanctum, the works. Unfortunately I was away on business, hmm? None of yours. Where was I? Oh yes, I was away at the time that Bathusa finished work on the shell of the beast. Rather than waiting for me he made the understandable but idiotic decision to recruit that charlatan Tchure to perform the sacrament.

"You see, there is a balancing act with creating a Divine Device. You want an entity with the power to drive the Engine. But if it is too powerful then the pre-prepared containments can fail. Unfortunately, for Tchure there is no such thing as 'too powerful', for him it is always 'bigger is better' and honestly? I think he was showing off. Well, he drew down a Greater Servant of the Blood God and implanted it into the trussed-up substrate. Immediately things went wrong. Quashric burst forth from its confinement and would have torn loose entirely but for the skill of Bathusa's binding etchings. So instead of a dangerous and eldritch box with legs and guns, we have this. Costing us slaves to feed it and belching daemonic fire rather than predictable artillery. Hmm? Oh I see, yes, he's getting started and you aren't completely used to this yet. We'll move on..." 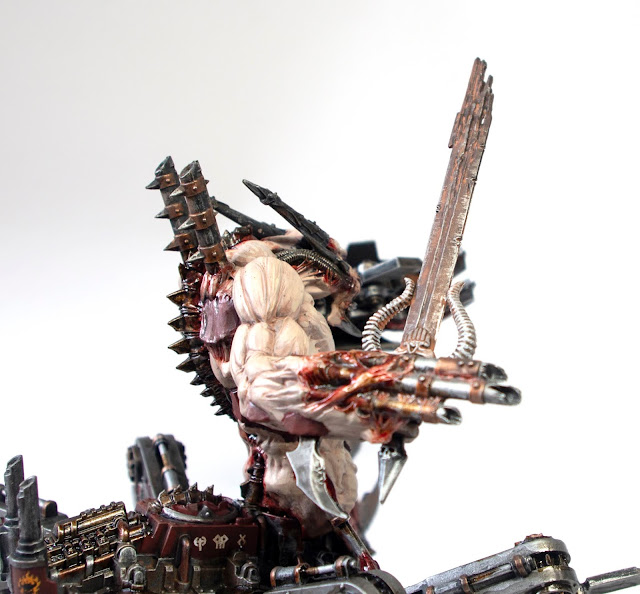 So yes, you can infer from that I am essentially running this Soulgrinder as a Defiler with defiler scourge (the sword), twin-linked heavy bolter and the battle cannon being its mouth. If anyone ever has a real problem with that I'll just summon a Soulgrinder from the Daemons Codex as a ritual [more evil chuckling]. Now, on to painting! The vast majority of the painting was just the normal double coat of cursedly-thin-Gal-Vorbak-Red and the highlight steps through Word Bearers Red into that with a bit of flesh thrown in. Where it got fun was the weathering. I decided it looked far, far too clean, so attacked it with enamel weathering paints. Dirtying the panels and smearing the joints and engine components with oil. Then it was blood o'clock. 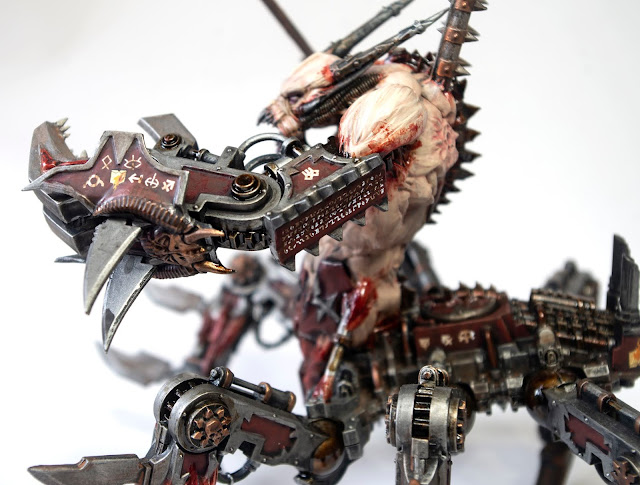 I used to mix my own "blood" (3 parts red ink, 1 part chestnut ink for the curious) back in the bad old days when there wasn't a good alternative. Mercifully, those dark days are over! We now have the amazing Blood For The Blood God which, frankly, does exactly what it says on the tin. It's a little tricksy to manipulate at times but resist the temptation to thin it. Its "goopiness" is part of its function, creating depth and mass to the blood. If you want it to look darker and older you can drip black ink into it and stir it in on the pallete. Cracking stuff.

So there you go! One more daemon engine and a dust catcher rescued from the shelves! If you've read this far: first, you can have a biscuit. Second, I have a question, are you enjoying the format of the army lore? I'm enjoying it but then it's me self-indulgently wurbling so of course I enjoy it! I ask because there are other army projects coming down the pike and wondered if people like the personified style of lore where a member of that force gives their perspective or if you would prefer something more neutral? Just curious.