By the Cog and the Switch and the Heresy of this B...!

Greetings my friends! Yes, it is time to stir sacrificial blood into the lubricating oil, carve runes of desecration into gear trains and generally get up to no good with mechanisms. Because it's time to introduce the Warpsmith of the Graven Star. Bathusa Gallek, Magos of the Dark Mechanicum: 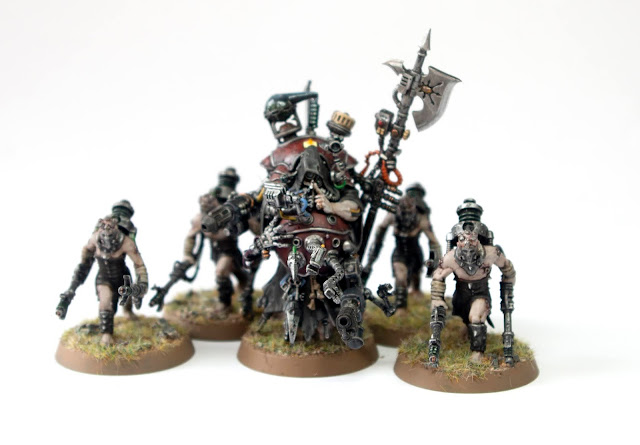 "Um, Jeff?" You might be thinking, "That isn't a Chaos Marine buddy, you alright?". Well, ok, yes, it isn't technically a Chaos Marine, but he's standing in for one. I've loved this Tech-priest Manipulus since he first rocked up in Kill Team. Always wanted to find a use for him, and frankly, he's always looked a bit... dodgey to me. Not entirely a good guy. So when I was starting to muse about Warpsmiths and not feeling that the GDub's official one was terribly Word Bearers friendly, the Manipulus reared his weird looking head again and asked "what about me boss?". Couldn't say no really. For the lore reasons for his inclusion we shall talk once again to our resident expert on the Graven Star, Orcus Kairon, Sorcerer of Chaos.

"Thank you for waiting, the Forge is not a healthy place for the unmodified and I had to see Grellek. Hmm? Oh empty night no, he's not Astartes, although he's tough enough to be I assure you. No, Bathusa is a member of the Mechanicum. I'll level with you, even before the Heresy, our legion was not the best at matters technological. Finding suitable candidates to go and drone prayers to machinery was always tough. Especially when we had beings truly worthy of our devotion. Yes I know they thought the Emperor was the Omnissiah and so did we to a point, but we had our own ways of worshipping the corpse god. So instead we encouraged the integration of the Mechanicum with our own. Invited them in as it were. Bathusa has worn our colours since before we declared for Horus and seems to consider himself a brother. As well he might, for while he might never be a brother of the blood, his soul is Colchesian, through and through." 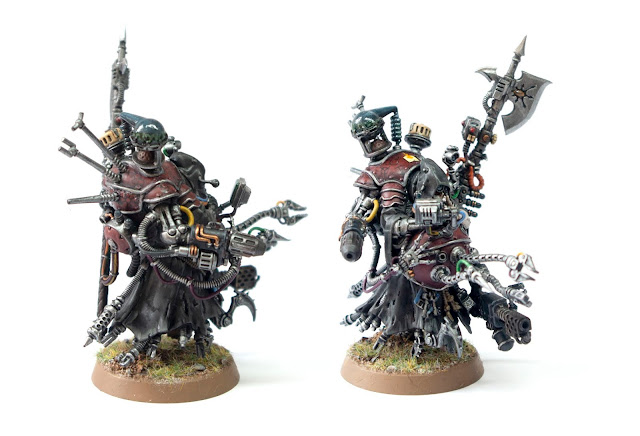 Obviously some minor modifications had to be made to bring him into the fold. The stave of the Manipulus was changed out for a chaotic power axe, his weapon arm was made into a meltagun and a flamer was added from that gift that keeps on giving, the Kataphron Destroyers. With the modifications made (thus making him WYSIWIG with the codex) I set to painting. I'd already decided that his battleplate would be in the red of the Word Bearers to bind him to the rest of the army. The Dark Mechanicum tend to have black robes so that was another easy decision made. Hardened Carapace did a nice job of making a grey-brown dusty black. Other than that it was just hundreds and hundreds of details. Lets have a look at some of them. 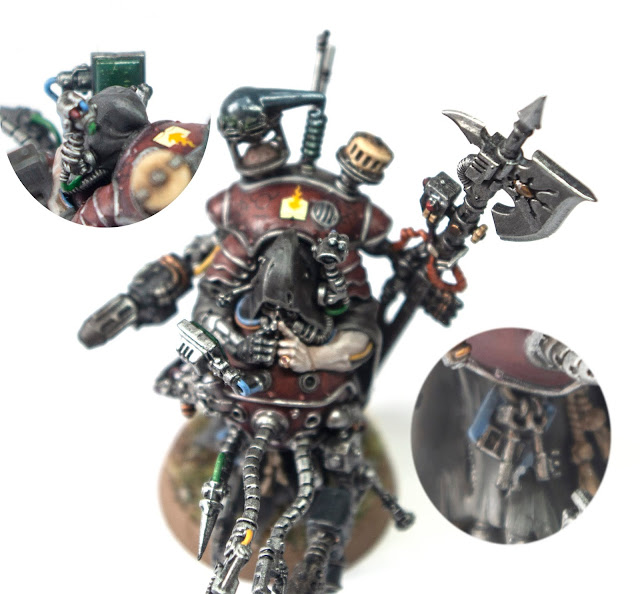 It's always tough to paint glassware. The one essential thing about glass, its transparency, is totally absent in a plastic mini, I tend to use Thunderhawk Blue to indicate that blueish quality that thick glass imparts. As it's almost invisible, I kept the computer screen minimalist. Just a few lines indicating some data that he is clearly perusing. And finally, my very favourite detail: his sacred artefact, the ancient 3.5" floppy. I like to think that they want it to be some deep secretive text but instead it's disc 3 of 7 of Lemmings or something...

Accompanying Grellek in a dark echo of the Servitor bodyguards of Techmarines are a unit of Negavolt Cultists - handily having been given a datasheet. I like to think that these are failed aspirants to Adept status turned into Something Useful. A combination battery and walking taser. I did a fairly simple job of these, clipped the head cables off because they were a bit "meh" for my tastes. The usual glass isolator look on the electrical componants being the same thunderhawk blue but glazed with Green-black Ink to give that "pylon isolator" look I was going for.

And that's all folks for today! Next time will be the turn of those baddest hombres, the Chosen of the Graven Star. Until then, lovely people,