By Charlie March 29, 2021
A Space Marine Battle Pile is a bit like a sumo wrestler in a room full of cats. He's big, and he's dangerous, but he's not going to control the room. Since I have spent the last year and a half lovingly creating just such a battle pile, I felt perhaps it was time to branch out into the mystical world of things that can move more than ten inches a turn. To that end: an Impulsor. Besides offering some pictures of said floating pickup truck, today's post will offer some notes on the simple methods I used to do the scratched leather seating and the display screens. 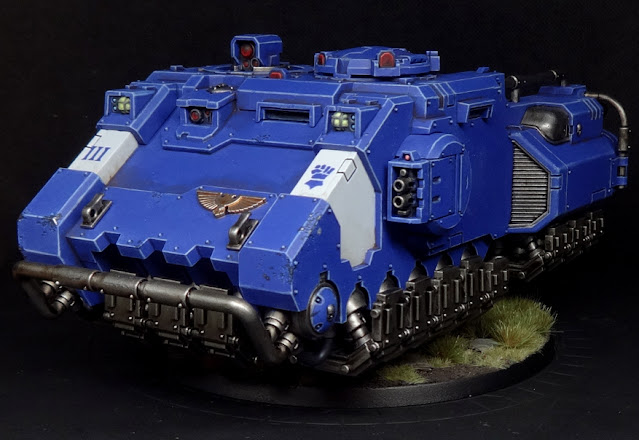 Why no gun on top?
I find painting this consistent level of detail quite arduous, so the way I've kept myself sane without compromising on paint quality is to paint the minimum amount of stuff needed to put a new unit down on the tabletop. I can always paint alternate weapon options later. To give myself maximum options further down the line, I actually purchased the Gladiator kit and used it to build an Impulsor. If you've not dallied with either kit, you may be charmed to hear that the extra pieces of hull sit quite securely on the tank without the need for magnets: 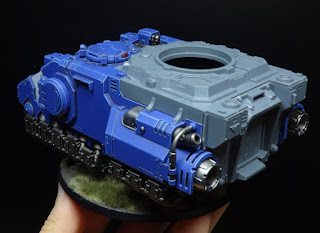 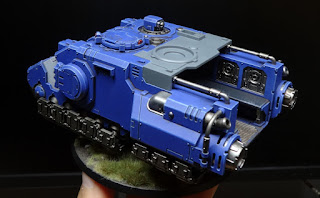 This also meant I could use the big swivel lens from the Gladiator in the second cupola slot, so the driver can look around using the camera rather than being stuck with a fixed forward view. The right hand side made sense, since the lenses on the front of the tank are on the right, and the cabin door is on the left, so the designers clearly thought about the cabin layout and put the driver on that side.
Lucky Number V
I primarily intend to use this thing to transport my running assault bolter dudes, who happen to be Squad V... and coincidentally, I noticed that the skull in the little alcove-shrine has a V carved into it. Perfect! I imagine this was Squad Five's first sergeant, and the men of Sergeant Cassander's unit touch his predecessor's skull prior to combat for luck. 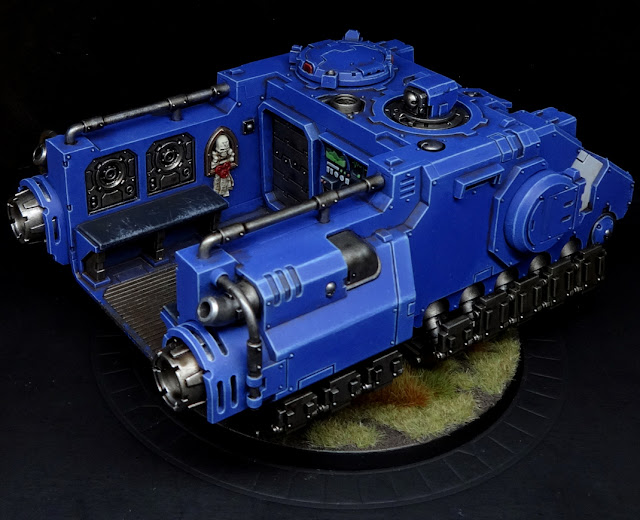 Leather seats
This is one of those quick little details that takes no time, is very easy, and really helps inject some life. Following a basecoat of Corvus Black, I thinned some Eshin Grey and flicked short, criss-crossing lines clustered in front of each of the charging ports. No need to be very precise, just go for it.
Next, I thinned some Dawnstone and dabbed at the lip of the seat, clustering the dots towards the middle of the weathered area, with a few more at the end of some of the Eshin Grey lines.
Finally, along with the rest of the tank, the seats got a thin glaze of Army Painter Oak Brown that I sloshed down over the whole seat and, while still wet, used the tip of my brush to cocentrate the pigment towards where the seat meets the chassis, since dust will accumulate more there than on the edge of the seat. It's barely perceptible, but knocks the colour off true neutral and helps it feel more lived in. 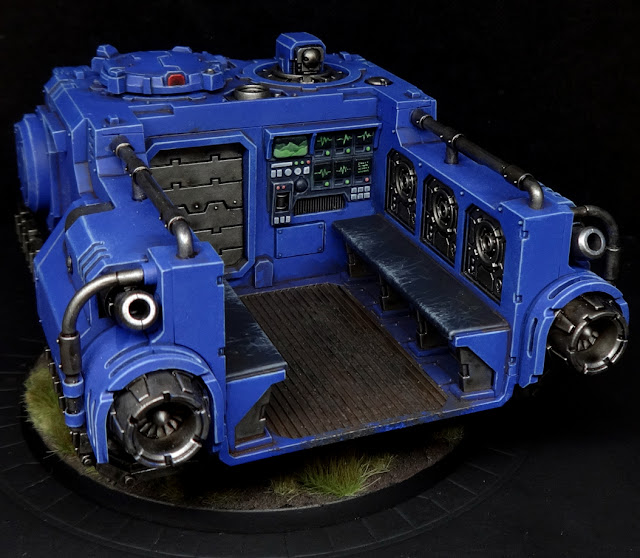 Display screens
This was simple enough. Essentially it's painted in black, white and grey, then given a green glaze. I started with a basecoat of Army Painter Matte Black, then for the text and squad heart monitors I just painted the designs with Army Painter Matte White. The landscape was marginally more involved; I used increasingly dark greys to paint more and more distant hills to try and create an impression of depth, so the nearest hills are Astrononican Grey, the middle hills are Dawnstone, and the rearmost ones are in Eshin Grey.
Once I was happy with all the designs, I threw a bright green glaze over the top. I was using the old Waywatcher Green, but these days you could thin a similarly vibrant Contrast paint to achieve the same thing. This green glaze subtly tints the black, and is why I don't just kick off with green lines instead of white.
Once that dried, a layer of pure Lahmian Medium went over the top to ensure a consistent level of reflectiveness.
What about the red lenses and all the rest of it?
You can read about that in the article on my Repulsor Executioner, Boriel's Wrath. 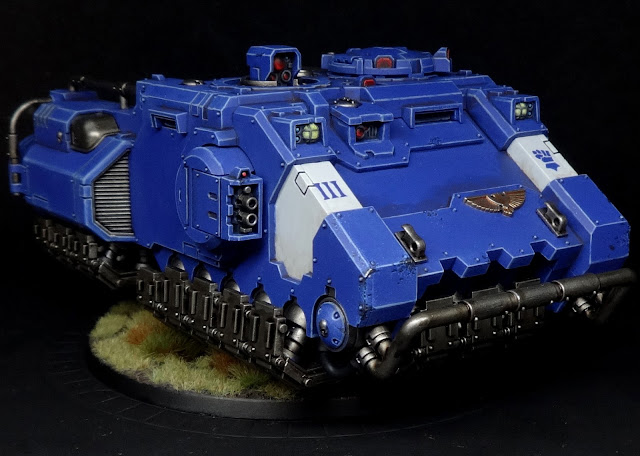 Army Completion Status: 98%
I only have one more Cobalt Scion in the queue: a lieutenant. I may add more to the army one day, but for now, I'm sated. Expect a post on the Lieutenant, then an army showcase, then at last I'll start talking about things that aren't blue armour again.