There have been a lot of heretics, xenos, and pretenders floating around the blog recently. Something needs to be done about that. The best way to do that is to bring back the First Legion. The true Angels of Death.

This is not my first Dark Angel project. It is in fact my third. Deep in the mists of time, in the savage days before the Beard Bunker's existence, I had a Guardians of the Covenant army. Most of those models got repainted into Dark Angels when I restarted in 2012. Now in 2021 it's time for the Primaris.

The Firstborn Dark Angels are still safe and well. They will get used if needed. However my painting has improved a little since then and the Primaris stuff is looking good. Especially now that there are bikes and Land Speeders available for the Raven Wing. As well as Blade Guard Veterans for the Death Wing. 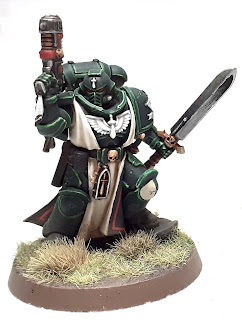 Before any of that can happen I need a solid core of marines. Naturally starting with the bare minimum, a couple of squads and a character. Since the Dark Angels have a rather nice Lieutenant model (If you throw away the un-helmeted head) I started there. Just a little dip back into the green to see how it felt.

Next was some basic Intercessors. I had decided pretty early on that this army would be units pulled from the reserve companies. As it is pure Primaris I figured the battle companies would still be mostly, if not all, First Born marines still. In this case I've gone for squad ten from the sixth company. 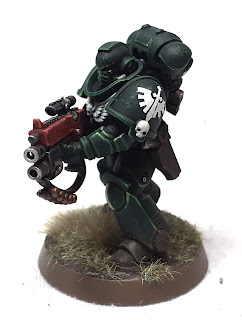 Unlike my previous Dark Angel project I'm using decals for the chapter, battlefield role, and squad markings. Last time I free handed everything but I just wanted the consistency of the decal. This is where Jeff stepped in. I mentioned that I was trying to hunt down some decals, then Jeff goes digging through his Tardis-like bits box and 2 days later enough decals to supply a fully battle company arrives in the post.

I've have gone for somewhat battered look to them. In my headcannon the new Primaris marines have a lot to prove to the existing Dark Angels, so they have been throwing themselves into the fray all that much harder and have picked up the scars to show for it. 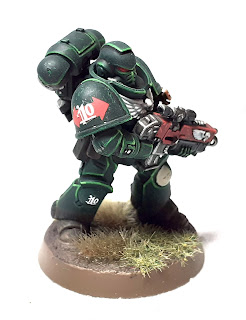 The next unit will be the remaining 5 Primaris marines from the box. Then maybe some Hellblasters, because Dark Angels love their plasma. I don't really have a plan, just a bunch of units that I fancy doing. As mentioned there will be a Raven Wing bike squad with that Chaplin on bike. I'm just let me hobby butterfly take me on this one and not worry too much about the paperwork or how they play in the current edition. I don't even own the book, yet. Heresy I know.