By Charlie September 21, 2020
Welcome to another episode of Charlie dials a Citadel Miniature down to 10. In this episode, I'm going to explain my illegal assembly decisions, touch on upscaling the Cobalt Scions paint scheme to a large vehicle, and why there's a Dark Angels icon painted on its arse. 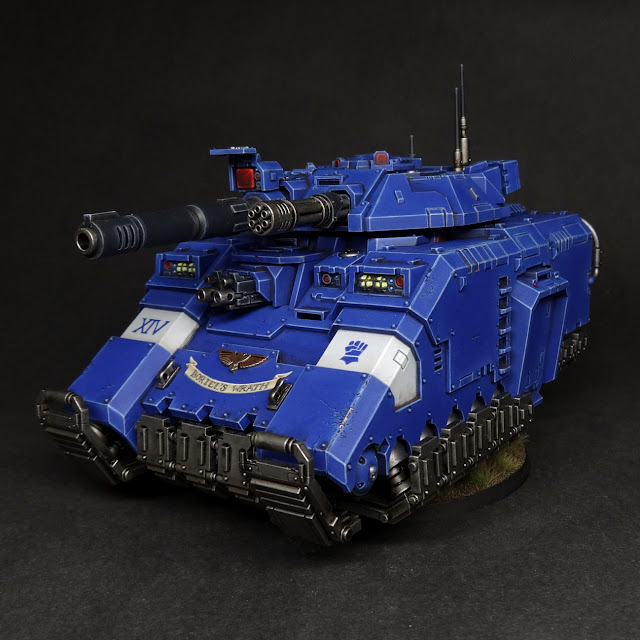 Aroundabout the time I was thinking my army dearly needed some anti-armour firepower, my friends Boris and Dan unexpectedly flung some GW vouchers at me for my birthday. Moved by their generosity, I decided to commemorate this in the painting. Thus, I combined their names and dubbed the tank Boriel's Wrath.
The name Boriel sounded like a Dark Angel, so I figured it was some hero the Cobalt Scions wanted to honour. Like the name, the story had to be a mix of Boris and Dan. Boris likes motorbiking and photography, while Dan's a wrestler.
I decided, therefore, that Boriel was a  biker who was zipping around taking extremely well composed recon photos when he came across a force of Cobalt Scions pinned down by Emperor's Children. Being naturally helpful, he spent the next two hours providing freakishly precise positional intel on the enemy, allowing the Scions to fight their way clear of the trap. Naturally this enraged the Emperor's Children, and when they finally cornered Brother Boriel, he was promptly beaten to death with a sonic blaster (for those of you who don't know, i.e. basically everyone, Dan once took an exploding guitar to the face in a wrestling match).
Boriel's extremely noble tale is written on the tank's aft door. This has the added bonus of tying in to the Cobalt Scions' lore; like the Romans they're all about venerating heroes of the past and will pay tribute to any Imperial hero, not just those of their own chapter, in an attempt to encourage greater political cohesion. 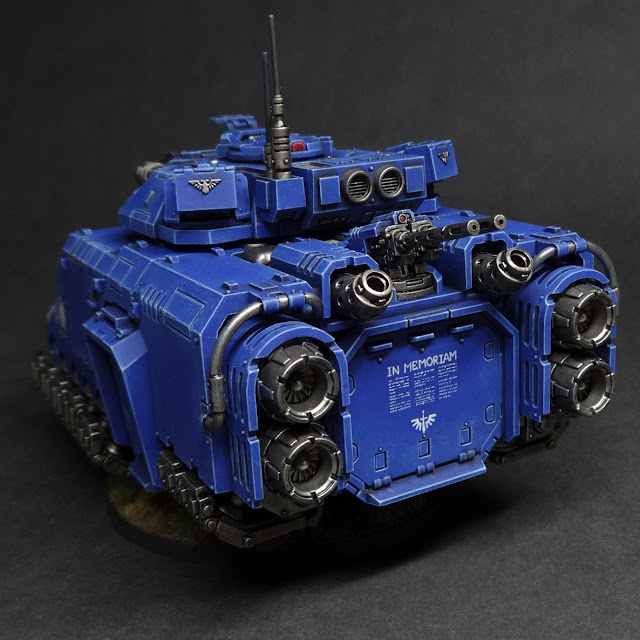 When the Repulsor Executioner first came out, it seemed way too busy. All those grenade launchers on the turret, all that stowage on the back... calm down, Cawl.
Then I saw some without the stowage. That helped. Said stowage looked inaccessibly high off the ground, and added a lot of visual noise. Then I noticed how the GW studio paint job of the plasma variant had left off the grenade launchers, and how much clearer the thing became visually. One issue remained: the mini storm bolter turrets. Apparently Belisarius "Totes a Genius" Cawl designed an anti-infantry defensive weapon incapable of aiming at its most common target, namely, ground-level infantry.
Great.
Since the turrets are integral to the turret's design, I was stuck with them. But then I thought, why not just stick the grenade launchers where the storm bolters are meant to go? At least grenades could come to ground quicker than a bullet, and could still be fired upwards at elevated targets.

A tip on sub-assemblies

That these tanks have to be painted in sub-assemblies is not news. What I didn't know was that contrary to the instructions, the main port & starboard anti-grav plate assemblies should NOT be glued in. They force the other fuselage plates apart, giving you a bad join. If you build the tank without them they just pop in afterwards - no need for glue!
This was a godsend both in terms of painting and assembly, and all due thanks go to the Paintmarine for his helpful video on the subject.
I actually took things a bit further than he did, and kept the front assembly separate as well, since this enabled me to spray them all with Leadbelcher spray separately to the main tank. You can see the sub-assemblies below: 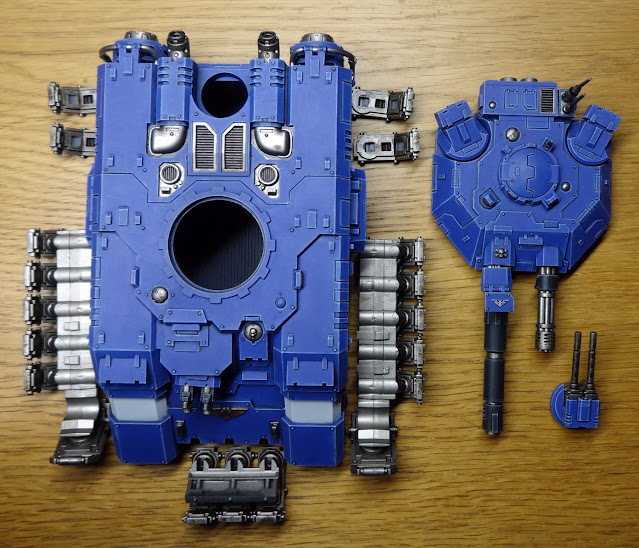 Obviously masking with putty and tape was needed to ensure I still had bare plastic contact points, but that was easy enough.

For the most part I followed my usual steps for painting these guys (step by step guide here). The difference lay in the weathering, and painting the red lenses. There were also the freehand elements, of course. If you're new to freehand and don't know where to start, I wrote this Goonhammer article on the subject.
Red Lenses
The lenses were an attempt to cleave fairly close to the studio paint job, and went something like this:
Dirt shading - lessons learned
It turns out that if you mix dark rich brown and black to make a dirt glaze, then put that over blue, it goes black. Being a Muppet, I'd forgotten my colour theory, and that orange is the opposite of blue. It looked great when I was applying it, but dried way darker. Suitably chastened, I went back over some of it with pure brown, which was light enough (and going over black enough) to retain some of its colour. This doesn't come out as clearly in the photos, but you can kind of see it's not pure black any more. I also did a few patches in the deepest recesses with a lighter brown - Army Painter Dirt Splatter - to get some tonal variation. 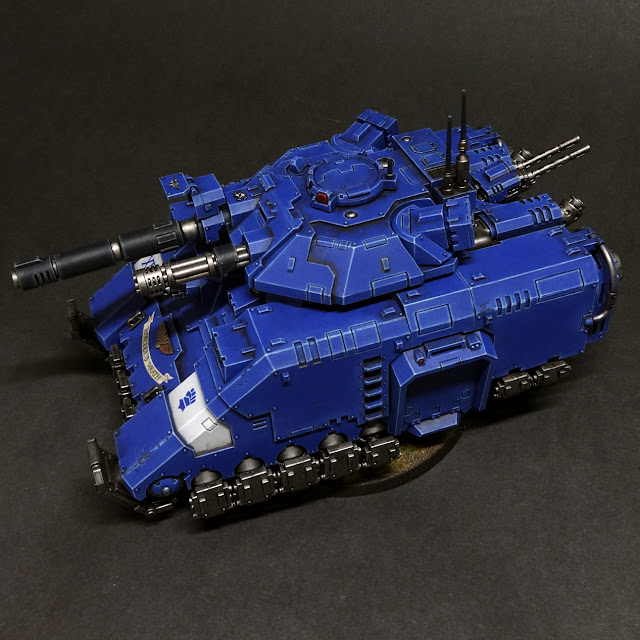 I can't wait to get this beast on the table, but I suspect that might not happen for a while given that when I do finally play a game of 9th edition it'll be smaller games. This thing has a hefty points cost and I've no desire to be That Guy.
Once again, my thanks to Boris and Dan for bankrolling this flying brick. Aside from scenery and a couple of super-heavy tanks, it's one of the biggest miniatures I own.