It's fair to say: I've got a bit of a thing for cults. Not content with painting 3k of Genestealer Cults I turn my eyes to the Eightfold Path and chose that most culty of legions: The Word Bearers. Having already brought you the Tannabheim IXth and the Corvid Cabal, today we're meeting some more Cultists following the Graven Star. How many? Oh, just another 30...

Ok, cards on the table time, I might have been doing a LOT of painting lately. Quarentine psychosis has been doing a number on me and I've been finding solace at the bottom of a bottle (of paint). As a result... there's a fair few new recruits to the Word Bearer fold to show you. So many in fact that this would rapidly become The Word Bearer Bunker were I to keep to our normal monday schedule. So following the numerological predictions and the signs found in the flights of birds and the entrails of beasts... or picking what felt right... I'm taking over Thursdays in the name of Chaos! 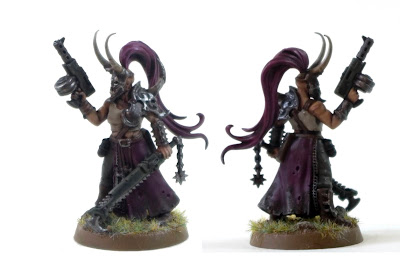 Up first are the fine fillies and fellas of the Shining Scions. These are the cultists from the Blackstone Fortress: Escalation set and make a nice stylistic change from the ones I've already done. Lets meet them through the eyes of our persistant mysterious narrator:

"Oh yes, the Shining Scions. All very devoted souls but with something of a muddled tradition of worship. I'm fairly sure that they started out as a fairly standard low-hive pleasure cult dedicated to the Thirsting Prince but fairly rapidly started incorporating a muddle of ritual practices. They hide their faces and often switch masks, embrace hardship and privation without complaint and are as bloodthirsty as any I've met. Striking in as many directions as they did was always going to attract attention and they were lucky one of our agents was nearby as the Corpse God's noose was tightening. Now they bring their brand of uneducated but enthusiastic faith among our ranks. As good for manning a barricade as the next rabble." 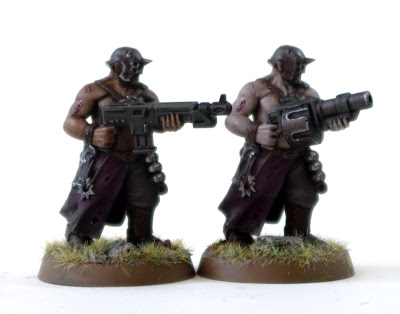 While there is a datasheet for using the Escalation cultists "as is", I decided I wanted to expand them out into a more straightforward cult. That meant dealing with a few twins. For the most part a quick head/horn swop (there's a goliath in there) and some armour plates did the job. The above pictured grenade launcher was more of a challenge. I wanted to convert him so I didn't have to repeat the super-distinctive heavy stubber loader. Mercifully the gap between hands seems to be fairly consistent with many weapons and with a little wrist surgery he was sporting a lovely new autogun.

To increase the variety in the unit I also pushed the variety of skin tones. It also helps to humanise them against the deathly pale Word Bearers. I finally feel that I'm zeroing in on decent recipes for most "flavours" of human. Will have to do a post about it once I feel I've nailed the ratios. Other than skin the rest of the colours were provided by a Barak-nar Burgandy (love that colour) skirt, US Olive Drab trousers and German Fieldgrey rifles. I deliberately kept the colours drab except the skirt. Wanted the purpley pink to pop. I also dirtied the edges of the skirts with Typhus Corrosion to give them that low-down grubby look.

Rounding out the 30 are two units of the classic Dark Vengeance cultists (that box has done some work in my army). I love these chaps, so much the "basic grunt cultist" and with the extras that the DV box brought they have a nice variety. C'mon G-Dubs, give us some variety beyond that wee box of 6 cultists eh? As far as painting goes... I don't really know... I gave these a fast paint job way back when I was trying out Necromunda rules. I just tidied them up and added a few Word Bearers red accents.

So instead of going deep on the painting, I'll let our Mysterious Narrator talk about them instead:

"Those over there? Oh, they're the Remnant's Wrath. Yes it's an odd name isn't it? Quite a sad story really. They came so, so close to victory. What you see there is a motley collections of a half dozen very successful cults that had risen up on Sogren's World. The fighting was bitter and if I'm honest our side seemed destined to succeed. They had even petitioned for our aid and we were speeding our way on swift wings to help them. Tragically a strike cruiser of Novamarines..." he spits "were near enough to be re-routed to Sogren's World. Our brave boys can stand up to a lot, but not Astartes. Not even these diluted echoes that wear the armour today. By the time we arrived it was all we could do to hurt Guilliman's bastard offspring and rescue what we could. They put aside their bickering rivalries and banded together into one united cult, the Remnant's Wrath. To this day they maintain their numbers by absorbing the waifs and strays from all-but-destroyed cults. See? Quite the tragic tale." 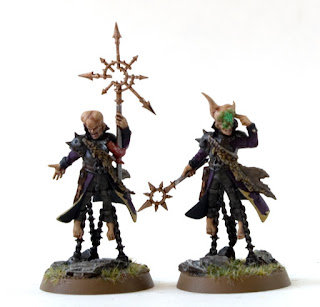 Floating along with the cultists are a pair of Rogue Psykers (using the Blackstone Fortress datasheets) to provide some psychic boomstick support. Surely our Mysterious Narrator approves of these?

"Ha! Those two, yesssss, well, let's just say that the Remnant's Wrath were not above eugenics to produce the perfect psychic host. What they created was a pair of inbred, mutant brothers with some limited psychic potential and egos larger than some moons..."

I'll put him down as "unconvinced". 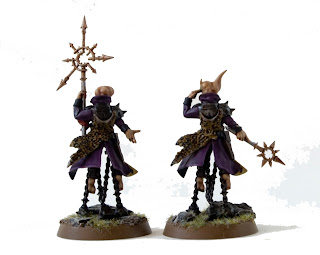 I decided to really lean in to the ostentation on these pair. They just scream "ego the size of Kansas" so I drew on Idi Amin and threw some leopard skin in there. On top of purple, classy innit?

So with that we shall draw our first Tainted Thursday to a close. Rest assured there are a lot more coming as the Word Bearer's are legion and I sold my soul to a devil at a crossroads one time in Georgia in exchange for the Paint Model Quickly skill. Until next time, lovely people,