I've had a bit of interest on how I do the forest basing that is on my Tau. In response I've put together a little step by step of what I actually do to get this: 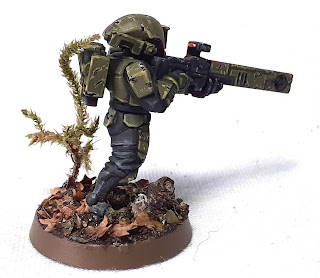 So grab your basing bits and lets get started.

I've grabbed a couple of spare empty bases, just so I can show the method:

I start by given them a solid base layer of Stirland Mud. This gives a nice textured surface to work up from. Leave to dry over night:

Next up I use Vallejo Thick Mud - European Mud. This is a diffrent colour, more desaturated and has a less consistant texture with little random bits of grass and the like. It all adds to the random, which is what we are after as nature hates straight lines. If I had a model on the base I would also stipple some up on to the feet/hooves/claws/tracks etc just to help blend the model into the base. Do not use your best brushes for this: 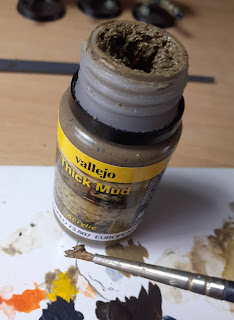 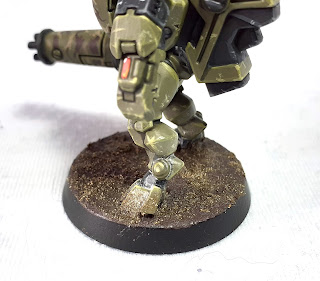 Once that has dried properly, again I tend to leave this over night, I superglue a few bits of stick, bark, and twig to the base. These I pick up during dog walks in the park but raiding the garden or any outside area works. I also super glue anything that needs a bit of height. I've been using some moss that was found in the garden and dried out. These make really nice scale plants. They look natural and just a bit alien, to me at least: 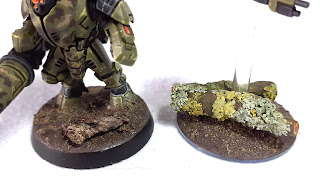 Once everything has been super glued and dried I go back in and blend them in with a bit more thick mud. Just making everything look as natual as possible: 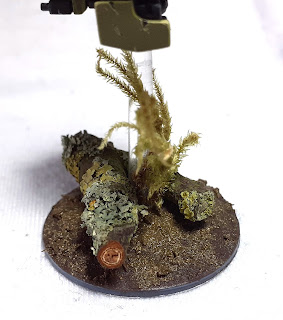 Now we start to get a little messy. Gather together the rest of your basing bits. I've been using Ivy from Army Painter, Dead Leaf litter from Green Stuff World and a few bits raided from the kitchen. I've mostly been using green tea but anything from the herb rack would work as well. I've had good results from Dill and Oregano as well. Just mix it up from what you have to hand. The idea is to create multiple layers of texture and colour. To big I start with the larger object. Really soak it in PVA and press it down into where you want it. This is messy but messy is what we are aiming for: 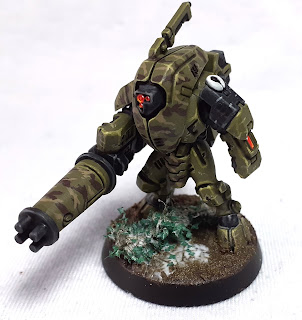 I normally put down a thick layer of PVA then sprinkle tea/herb mix then add more PVA and add the leaf litter. Also don't be afraid to add other bits as well, on the base below I've added additional bark to it as that was what I felt was needed at the time: 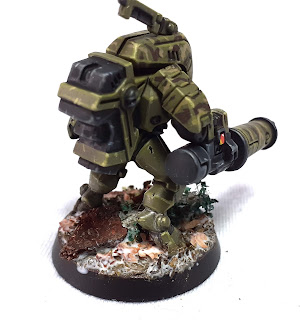 Once you've done all the bases I tend to seal things down with a thinned layer of PVA. I don't worry about the sheen left by the PVA, it just adds to the natural deep damp woods feel of them. I once again leave this to dry proper then go in for the lap of victory and paint the base rims. Then we are done and have some very pretty bases ready for whatever models you want:

These are just a few random unused bases I put together to show the steps I take, but once you have a model on their you can adapt and have a mini-diorama on each and every base. If you have access to a hair drier you can speed things up. You don't have to limit yourself to what I've used. There are hundreds of great scenery products out there. Look up scale modelling and train modeller sites as they always go all out on their scenics. Just get creative and have fun with them.