By Jeff September 24, 2020
Well met fellow followers of The Word. We have gathered here on another Tainted Thursday to introduce you all to more brave warriors of the XVIIth Legion. Today it is the turn of more marines from the rank and file to swell the numbers among the Graven Star:

I haven't decided on a naming convention for squads yet. Just giving them the sergeant's name seems a bit too Imperial, so I'm working on coming up with cool ritual names for the units. I'll unveil them when they reach their final form - i.e. when I paint another 5 for each unit to bring them to 15 strong units. For now, lets take a gander at the lovely models. 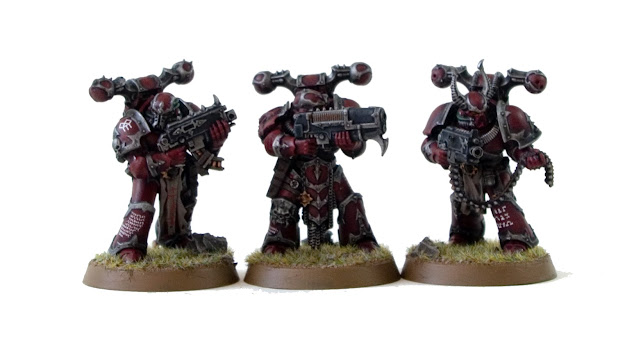 I'm keen on keeping the mix of ranged and close combat armed lads. Maximum flexibility for Deadpool's Maximum Effort. It also reinforces the pleasing chaotic vibe of the squads, making them feel less uniform than their Imperial cousins. 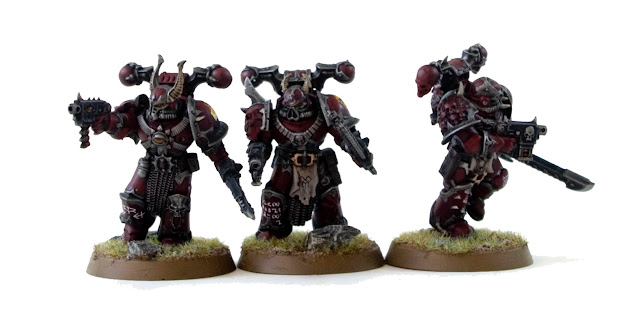 I've pretty much got the painting for these down to a science now. Drybrush metallics over black. Paint in the armour plates with 2 coats of Gal Vorbak Red which isn't as beefy as it wants to be. Paint in the black areas either Corvus Black (for weapons) or German Camo Black Brown (for leather) then drown the whole thing in Nuln Oil. At that point a huge amount of the work has been done. I highlight the red up to Word Bearers Red with a little Cadian Flesh in there and the weapons get a crisp Dawnstone edge highlight. From there it's just details. 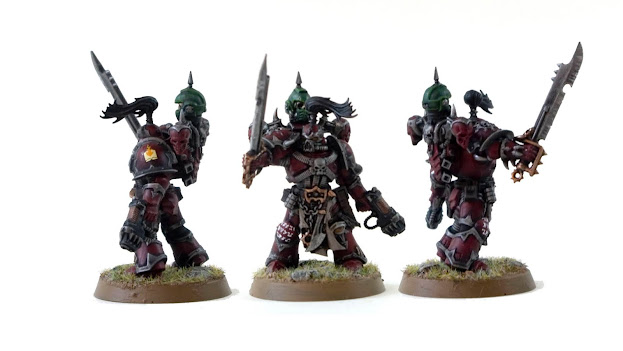 I suspect I am far from alone for having a trollish glee at including my friends armies as trophy racks. Charlie's Cobalt Scions had been getting a lot of outings so I decided that Boris and Drew's fledgeling Salamanders could do with a bit of the ol' head-on-a-spike treatment. And what a head it is. The dangling faceplate, the skull inside... *chef kiss* magnifique. Also nice that the champion's power sword will now make him S5 rather than just cut better. Buah ha ha haaaaa. 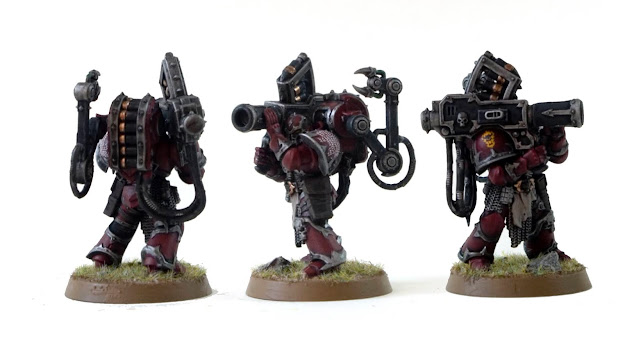 Technically, the CSM squad box comes with a missile launcher, buuuut, I had a box of havocs... and theirs is waaaay nicer. So with a little fiddling I managed to get a Havoc missile launcher to fit a normal chaos marine and thus give me all the lovely claw-ey glee. I forgot to photograph it, but I gave another one of the marines the "backpack with missiles dangling from it" to be extra ammo for this chap. Helps the story of the unit.

With all these extra lads painted I felt I'd earned another character, so here's the second of the Exalted Champions of the Graven Star: Varock Sa'quath. The story of his opposite number can be found here if you need a refresher. 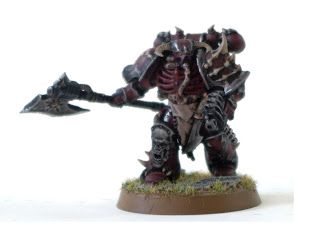 Which means it is probably time to check in with our Mysterious Narrator to see if he's warmed up to him any...

"It is becoming clear that the days of our Lord Khoura are drawing to a close, he approaches either apotheosis or catastrophy. While we all hope that His Greatness shall ascend to the Warp the practical upshot is that there will be a leadership vacuum at the top. There are only two clear candidates, my preferred choice in Nar Merenkar, and then there is that lump of grox-snot over there: Varock Sa'quath. He is everything Merenkar is not: Brash; over-arrogant; demanding the Gods' attention with little thought to the consequences. With Sa'quath in charge the Graven Star would doubtless reap a wondrous harvest of the deluded Imperials. But they would do so on the pyres of most of the chapter. I, for one, will not tolerate that. Of course, that idiot Tchure is grooming the little maniac, that's what comes of losing half a brain I guess... oh and he's short. Yes I know it's petty but it's still a fact." 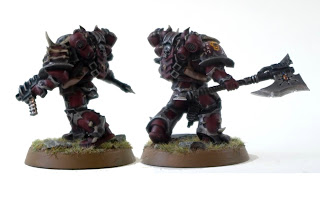 This is another of the Chosen from the Dark Vengeance sets, with him being an older model and in quite a broad stance he does seem smaller than some of the new models. Hence my decision to make him a short-arse in canon! There's not a huge amount to talk about with the painting of Sa'quath so I'll leave the pictures to speak for themselves and draw this Tainted Thursday to a close. I'll be back next week with more followers of the Dark Gods. Until then, lovely people,