By Jeff June 22, 2020
Welcome back fellow followers of the Eightfold Path! It's another lovely day in the Word Bearers, every meal a banquet! Every paycheck a fortune! I love... hmm. Might have cross-mojinated myself a bit there. Back on track Jeff, today we introduce another new character (might he be our mysterious narrator? Spoiler: No) and a unit of troops he inspired to come to our side. So settle in with a nice cup of tea and meet Halam Caeroth the Many Blessed. Dark Apostle of the Graven Star chapter of Word Bearers. 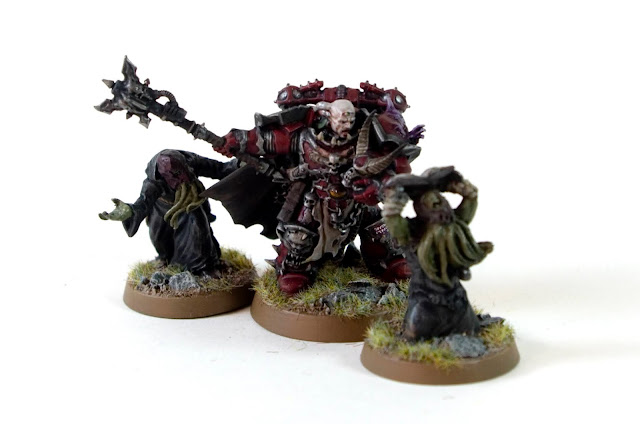 For those with long memories, my Dark Apostle will be familiar as the leader of the Chosen from the Dark Vengeance set (I don't advise doing a drinking game based on the number of times the word Dark will appear in this post). He always struck me as being perfect for a fallen Chaplain and so when it was time to embark on Operation Word Bearers he got promoted. Trouble is, Dark Apostles now have little helpers in the form of Dark Disciples (see?) and I didn't have any. Scouring the intertubes for options I ran into some Cthulhu cultists from Scibor Miniatures two of whom were perfect for what I wanted. More on them later, for now, let's get a closer look at Caeroth and find out why he is the Many Blessed. 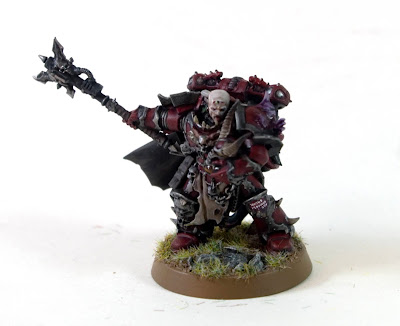 I was torn with painting whether I would go for the black armour of a chaplain or the standard Gal Vorbak Red of the rest of my Word Bearers. In the end I figured black would look too much like a member of the Black Legion had wandered in and stuck around so red it was. As a nod to the chaplain scheme I made sure that the cloak was black and in fact liked the dusty black I achieved so much that it's become the standard cloth colour for the rest of the army. Stormvermin Fur mixed into black for the curious. Time for some backstory, summon mysterious narrator!

"If any of my brothers could be called a friend and an ally of mine it would be Halam. As Dark Apostle of our Chapter he shares certain of my goals and methods. Subtler methods of persuasion and conquest than the blunt tools of bolter and chainsword. For as long as I have known him he has demonstrated the effects of iron will upon the bretheren by containing various cacodemons and lesser servants of our Lords and Masters within his flesh. Not, you understand by undergoing the sacred synthesis of Gal Vorbak, no, he simply compels them to remain by will and ritual alone. He uses them to achieve a closer connection to the warp state and to demonstrate his mastery of willpower. It is an impressive feat although it has wrought considerable fleshchange upon his form. I know that one way or another I shall lose my friend one day. He will make a mistake or lose concentration and the imprisoned neverborn shall revenge themselves. Until that day, I know I can count on him." 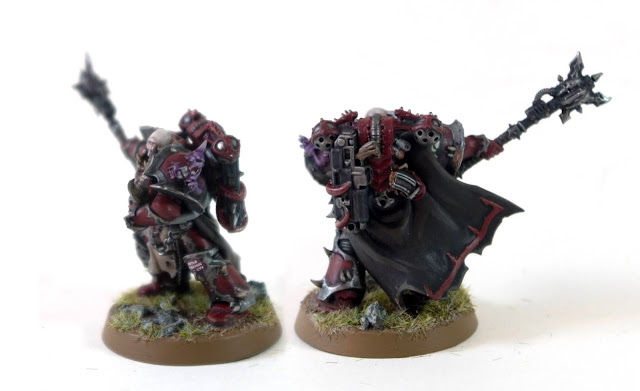 The daemonic bits of this model were most fun to paint. I've always loved that bolter-being-reloaded-by-helpful-tentacles  backpack and I hadn't even noticed the little dude trying to push his way out of Caeroth's shoulder pad. Clearly he currently has a Plaguebearer installed. Figuring out what colour would work against the red without popping too much was a challenge. In the end I summoned the painting hive mind of the Beard Bunker by sacred rituals of WhatsApp and asked them. We decided on purple and as any excuse to paint purple is leapt on by this painter I went for it. Fading the purple back into red made it look like the little guy is straining to push himself out of the metal and almost achieving it. 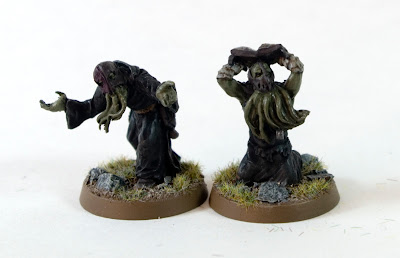 Adding their obsequious weirdness to the package are the Scibor Chaos Cultists. If I'm honest, Scibor's casting often lets down some nice ideas. There's often quite a rough texture to their parts that I can't fathom if it's moulding or sculting that causes it. As a result I resolved to paint them quite simply in order to mask the casting flaws. I also decided to make them a weird alien race rather than human mutants as that would add to the interplanetary feel of the Word Bearers. Let's hear some more about them:

"Those things following Halam? My brother, even I do not fully know, they apparently come from some alien world swallowed by the Eye millenia ago. The Dark Apostle found them on one of his wanderings and they seemed to take a shine to him. There's a whole cult of them aboard ship and he uses them as acolytes in all his rituals now. He says that their nature is some of the purest touch of Chaos he has ever known. They have taken the name Caerothi as their race although that is clearly not true and just a dedication to Halam. They speak only to him so only he knows their language and any Colchesian from them is only memorised passages of the Book of Lorgar. Who knows where they come from or why they follow Halam, he's not telling and I'm fairly sure they can't..." 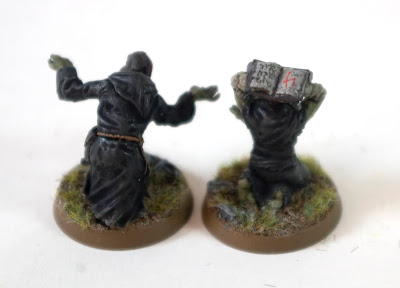 The simplistic painting stopped at the book of course. Sadly all the Colchesian runes on the transfer sheets are in white. I'd've loved to use the decals to get perfect Colchesisan into the book but had to use brush instead. I did use one of the big glyphs from the Night Lords on the right page as a sort of mystic rune. But lets move from the spreaders of The Word to those who heard it and went "you know what? He's right..."

These fine fellow-me-lads are the Tannabheim IXth. I've decided that all my cultists will be a lot bigger than their on table representations. So I can always draw another unit when one is massacred. The Tannabheim IXth represent a regiment that turned traitor during a war against the Word Bearers. In fact I'll let "him" tell you about them:

"Ah yes, the Tannabheim, they represent the real successes of our methods as a legion. Why kill the troops that the enemy have trained when we can simply turn them? As I understand it, the Tannabheim were part of a large deployment on Turok's World against us. The Imperium - as they so often do - had left them exposed and vulnerable, uncaring of their lives so long as they spent them slowly to buy time for redeployment. All the men in the regiment knew it, everyone knew they were doomed. They could see our forces readying for the assault and all their officers were spouting the sort of "not one step backward" rhetoric that marks doomed soldiers. So some of their scouts slipped out and approached our lines unarmed and under flag of truce. Brave of them. They doubtless thought they would be simply murdered but had to try nontheless.

"We told them that they would be spared if they forsook the Emperor that turned his back on them, swore to the Dark Gods and our service and fought on our side. They willingly agreed, seeing no great benefit in the alternative. We told them to give us a clear signal should their coup de etat succeed so that our hammer would not fall at dawn. As the binary system's light crested the horizon we saw a beautiful sight: 75 officers, commissars and loyalists crucified on the leading edge of their trenchlines. We sealed our bargain by annihilating the offerings with bolter fire and then advanced unopposed over their fortifications. They've been with us ever since." 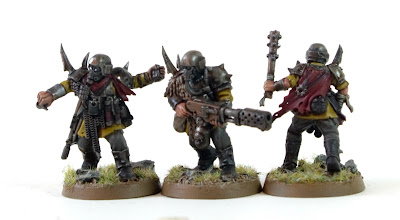 The models are, of course, the traitor guardsmen from the Blackstone Fortress set. They look cracking as a group of guardsmen who have gone gradually native. I chose mustard drab for their uniforms to distinguish them from the rest of the Word Bearers. But to bind them to the army - and to prevent any "oh sorry mate, thought you were a guardsman" friendly fire incidents - included ragged bits of cloth in Word Bearers red to act as a recognition signal. I did some minor conversion too, just swopping the melee weapons on the two pairs of close combat lads to try to kill of some of the "twinsies!" vibe.

Expect to see a lot more cultists my warped friends. For the Word Bearers way is to spread them and encourage them. What do people think? Are we liking how the story feels? Mysterious narrator not too annoying a conceit? Love to find out. Until then, lovely people.