By Andrew June 08, 2020
Wibbly-wobbly, timey-wimey gubbins effect
- like a cheap soap opera or sitcom
We're heading back 12 years to the summer of 2008, I'm still living in Oulu, Finland, and I'm bored.  Wandering the streets I find two things:
Little did my wallet know how expensive one of these discoveries was going to be....
Fade cut back to the present... 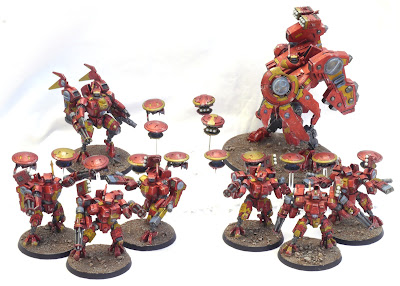 You see in the intervening years amongst all the changes there had been the introduction of at least one new race, the Tau.  Having just gone to see Iron Man, the obvious connections occurred in my head and an Iron Man themed Tau force was the offspring.  It only took me 12 years to realise...
The idea rattled around in my head but whenever I tried to think of a way to implement it I fell foul of how on earth do you create a nice metallic red and gold.  It was finally when GW released the Contrast paints that I saw how I could do it given my ... ahem ... painting abilities.

To be honest, this is probably going to be more about Contrast paints with some (hopefully) pretty pictures of the Tau interspersed; as what I think I've learned about the paints has ended up being more interesting to me and I wanted to share.  Everything I'll be talking about here can also be found elsewhere, I'm no Contrast guru, but maybe some of the things I've found might be interesting.
MOST IMPORTANTLY:

Contrast seem to fall into 3 broad groups.
However, luckily there is a way to "fix" those paints that don't work, and the same techniques can be used to manipulate any of the other Contrast paints to do what you want. 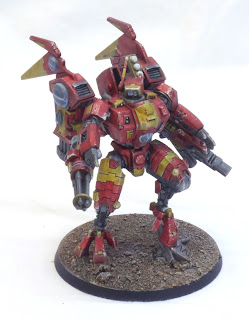 "Research" (ie:  watching YouTube vidoes) helped me learn that Contrast medium is basically a 50:50 blend of two common art supplies - Matte Medium and Flow Improver.  These can be bought in bulk from most art shops.  The Matte Medium is the liquid that most paints are based on, it carries the pigment in the paint and manages not to separate out too much; there seems to be a higher concentration of this in Contrast paints compared to regular paints which I think is what gives them their translucency.  Flow Improver is used quite heavily by folk who airbrush and has magic in it which helps reduce the surface tension of liquids so they flow more, a bit like dish soap but without the bubbles; in Contrast paints I guess this is what helps the paint flow over the basecoat into the recesses to achieve the shading effect. 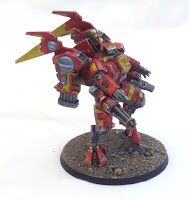 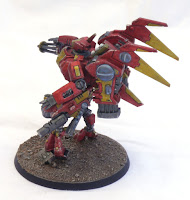 What this allowed me to do was mix in varying combinations of Matte Medium, and Flow Improver, to change both the transparency and the flow properties of these Contrast paints until they behaved much more like the "good" paints.  What did this mean? Well for a brand new pot of Blood Angels Red I added about 50 drops of Matte Medium, and 90 drops of Flow Improver.  This completely changed the behaviour of the paint and turned it into something I really liked. 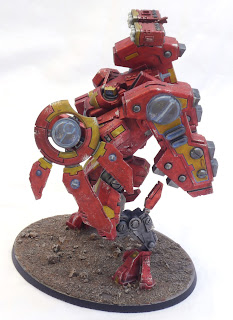 Finally, the paintjob on these. 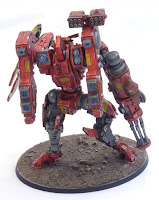 That's kind of it.  I really do like Contrast paint, but I think you have to treat them as a tool rather than the painting equivalent of 42.
There's lots of much better guides and tutorials out there on these that I drew from to get these to look this way, so if you are hesitant about Contrast paints then have a look at those, and get yourself some Matte Medium and Flow Improver and just experiment.
Right, time to get out of here before someone enacts a Clean Slate Protocol.