By Jeff June 01, 2020
Greetings fellow heretics and devoties of the Dark Gods! Yup! We're back with the Graven Star chapter of Word Bearers and some decidedly lumpy boys...


Today is the day that these horrible fusions of metal and flesh stride forth from Sicarius and make merry war upon the servants of the false Emperor. I grouped these together because they have surprisingly similar sculpts and painting requirements, so I was able to solve a bunch of problems simultaneously and apply that learning straight away. Let's first turn our attention to the Hellbrute: 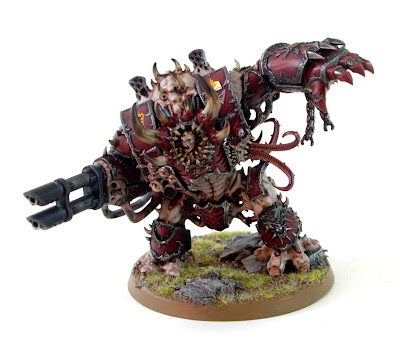 This is the Hellbrute from the old Dark Vengeance kit and is, in my opinion, the best GW have ever done. I love everything about it, from the horrible mouth that swallows the marine's head back inside when it's not looking out, to the lashing tongues and the broken chains. There was only one thing I wasn't keen on: the multi-melta. See, in Imperial armies a multi-melta is great because of drop pods, you can park your dreadnought right where it can shove a nasty amount of anti-tank right up the bugle of any enemy armour. Not so much the Chaos alternative. So I decided to do a little surgery and give this fine fellow the twin-lascannons that will do much the same job but from far, far away. As always with this army we need a little bit of backstory and as always that will be provided by our mysterious narrator:

"Do you see that towering mass of flesh and adamantium over there? Once that was Bathasu Iennos, a fine and well respected champion of the Graven Star. Well, his path of devotions led him to the Gal Vorbak - a perfectly valid choice for those that wish it - and thus he ceased to be Iennos. The merged entity that he became continued to fight well and with selfless devotion and thus it was to all our horror when he fell in battle against the Tau. Recovering his barely living shell - the neverborn had fled back to the warp - Lord Khoura instructed our Warpsmiths to install him in a dreadnought chassis that he might continue to fight. If I am honest, for this is rarely an honour, I think Khoura was curious about what would happen if a Gal Vorbak were to be installed in such a machine. Well, now we know. There seems to be less visible metal every year and who knows what will become of him in the end. I hope he finds a respectable death before we find out." 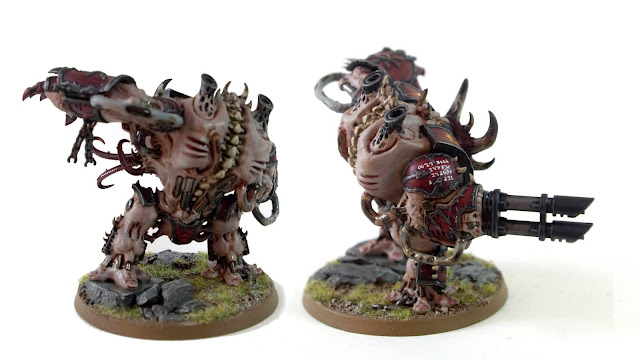 Who is that guy? Guess we'll have to wait to find out. Painting all these models, I was torn when figuring out what colour to do all that demon flesh. Part of me wanted to minimise it with a deep black scheme leaving the Word Bearers colours dominant. But another part of me knew to lean in, embrace the gribble and make disgusting blobbly flesh the norm. So I listened to that part of me. All the flesh is basecoated in the excellent Rakarth Flesh, washed in Reikland and then highlighted up as normal (adding Pallid Wych Flesh). The fleshcables - as I've been terming them - I wanted to resemble blood vessels, so after a quick hunt for dissection pictures for reference I added a bit of Thunderhawk Blue to some and Bugman's Glow to the others. I think they look plenty gribbly. There's a lot of weathering to go after that but I'll natter about that in the Obliterators section, speaking of... 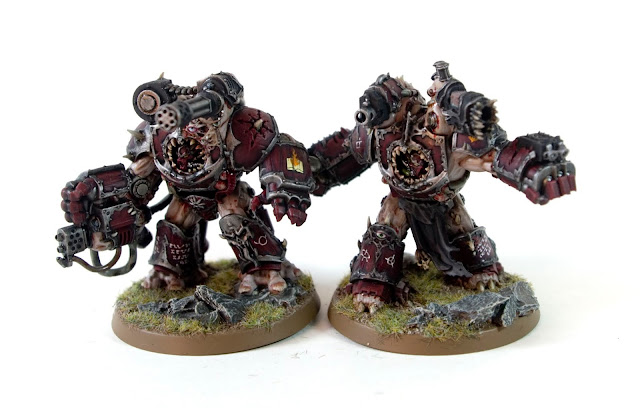 These were odd models for me to paint as, frankly, I didn't like them at all. Their cartoony aesthetic - especially in the studio scheme - is a real turn-off for me and I probably wouldn't have bought them on their own. But they came in the get started box so I was able to have a close up look before - what I assumed I'd do - selling them on. In that close look I started to see details I really liked. You can see stuff working under their skin, bullets being pushed under the surface up to cannons, power cells grown over. I started to, well, not like them, but dislike them less. Then I looked at their rules, gave a little yelp and resolved to paint these slabs of boomstick. 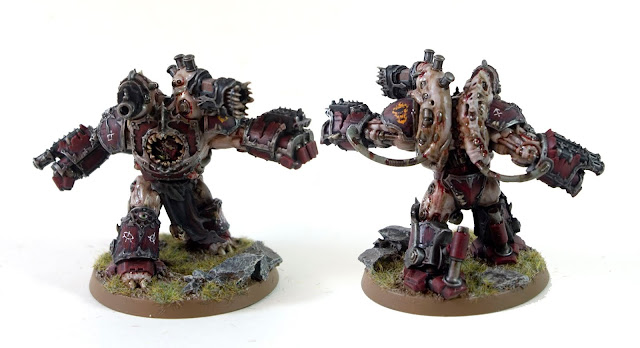 As I painted, I tried to think how Word Bearers would feel about Obliterators. They're not a natural fit so some musing had to happen. I eventually decided that the various sub-cults in the legion (Obliterators, Raptors, Havocs, the Gal Vorbak possessed) would be treated in the Word Bearers as akin to the Mystery Cults of the ancient Greek and Roman worlds. Something to be indulged in from time to time in order to glorify the gods in a unique manner, but not as a way to live. Those who get trapped in them and see them as a way of life become the Havocs, Raptors etc and especially the Obliterators. Lets bring in our narrator again to say a few words.

"Great empty gods, not these two. You see those lumpen idiots lumbering after Iennos as though they are lost chicks and he the mother hen? They term themselves Obliterators. Followers of some ridiculous technomagical cult they encountered when we served alongside the Iron Warriors. At first it was just learning to store holdout weapons within forearms and changing the damage output of weapons. Now look at them. All but gone but for the thrill of weapon discharge. Moronic. No-one really acknowledges them now and all pretend to have forgotten their names. Their only really friend is Iennos and he only speaks in digital shrieks of binaric fury. Pathetic. Just don't say any of that too near them, those weapons are not just for show and they have a temper..."

Painting-wise, they're not much dissimilar to the basic marines. So I'll focus on the weathering that I used to make the demon skin go from "hmm" to "ewww". First, streaks of Blood for the Blood God are drawn down from any holes in the skin. I figure these are wounds that never really heal so are constantly leaking vital fluids. Along with this I used an enamel weathering paint from Ammo of Mig Jimenez designed to simulate engine oil. With this stuff I could use enamel thinner (turpentine) without any danger of harming the acrylic to thin out the oil and make nice realistic streaks. I think it worked out rather nicely.

Having painted them, my opinion has moved from mild dislike to "meh, they're ok". They're never going to be my favourites but they are unpleasant to face on the tabletop so I am looking forward to bringing some boom. What do you think? Demon flesh work ok? Does my headcanon of the Word Bearers match up with yours? Love to find out. Until next time, lovely people.