In Praise of Soup Armies in Warhammer 40,000

By Charlie May 24, 2021
This is one of those titles that really only makes sense to the initiated. If you don't know what a 'soup' army is, it's where your Warhammer army combines forces from multiple factions, e.g. an army that contains Sisters of Battle, Imperial Guard and Skitarii. Soup is great from a lore perspective, but presents obvious game balance conundrums, not least of which because it's only really the Imperial, Chaos and (to a lesser extent) Eldar than benefit from it.
Worse, thanks the rules in 40K's 8th edition, it was a way for competitive players to farm Command Points by taking token detachments of cheap forces, giving rise to phrases like the "loyal 32" (a token battalion consisting of 3 Imperial Guard squads with a couple of jobsworth officers whose only job was to stand around scratching their arses and, when asked, passing command points to a surly Space Marine). This in turn has led some people online to feel that soup was always done for a mechanical benefit at the cost of narrative theme, which is the exact opposite of its original intention. I've seen some folks even suggest that those who soup are shying away from really theming their armies. All this despite the fact that 9th edition has done a good job of changing the rules; nowadays you aren't rewarded for taking multiple token detachments, and increasingly there are rules to reward people taking single-faction armies.
Well I for one love me some soup. There are many varieties, but classics include a watery broth (Guard infantry) with croutons (Space Marines). Or you might want a cream of tomato (Skitarii) with chunky vegetables (Sororitas). You might even want to go hog wild and try dipping fried toast (Custodes) into your Minestrone (mechanised guard). With any of these, you can ram a freshly baked baguette into the bowl, blasting soup out in all directions (Knights).
Indeed, there are a number of factions that to my mind really only make sense in soup format. GW need to shift products, so offering a whole army of Imperial Knights makes sense from a business perspective, but from a gameplay and cinematic perspective, I think it's way more cool seeing an Imperial Knight towering over its allies as the enemy rushes towards them. 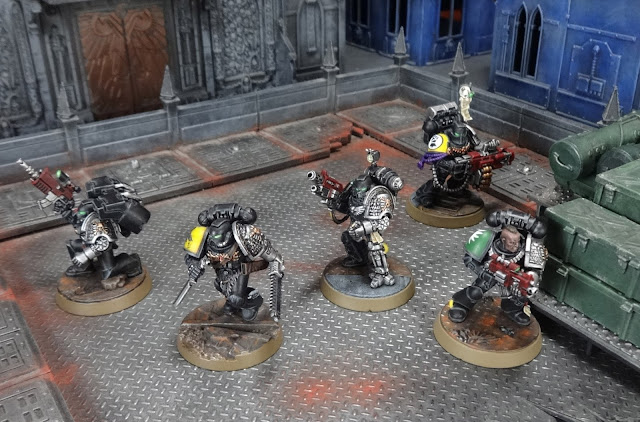 Deathwatch never made sense to me as a pure army either. The whole point of Deathwatch was the kill team, not the army. They're a characterful little unit you can add into a larger Imperial army. Same goes for Custodes and Grey Knights. It's great that you can field them as a pure army, but honestly I think they look, feel and work best as specialists standing next to more conventional stuff. If everyone in the army is special, none of them are. Jeff clearly agrees with me, because he just added one single shiny Custodian to his Imperial collection.
So Jeff, why just the one? What's his deal? 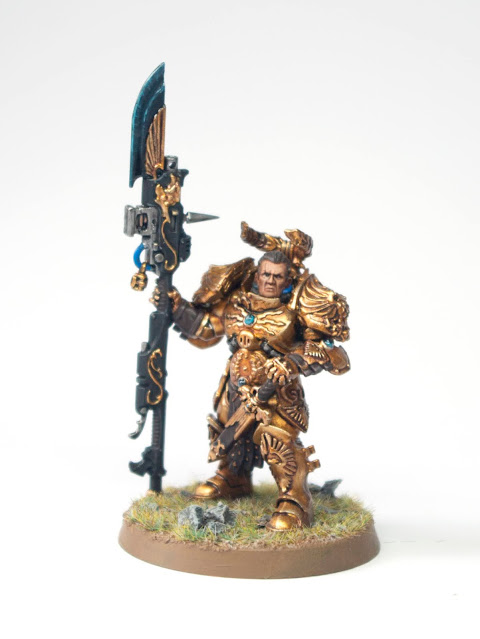 Jeff: Well Charlie, this slab of golden stabbenation is Custodes Tybalt Loque. He has been despatched to our little patch of the galaxy (the Eridani sector) to investigate potential threats brewing there that might be of threat to Terra in time. Given that there's only 10,000 of the Blingy Brothers in the entire galaxy and most of them are needed to secure a palace the size of the Himalayas you'd kind of think they couldn't spare many chaps to go haring off. However, GDubs clearly disagrees as you can now field an entire army of Custodes. Baffling. Fortunately, with the way Faction keywords work you can easily drop a random dude with the same keyword into an existing force and just take the mild hit that having a mixed - and thus disrupted - detachment brings. 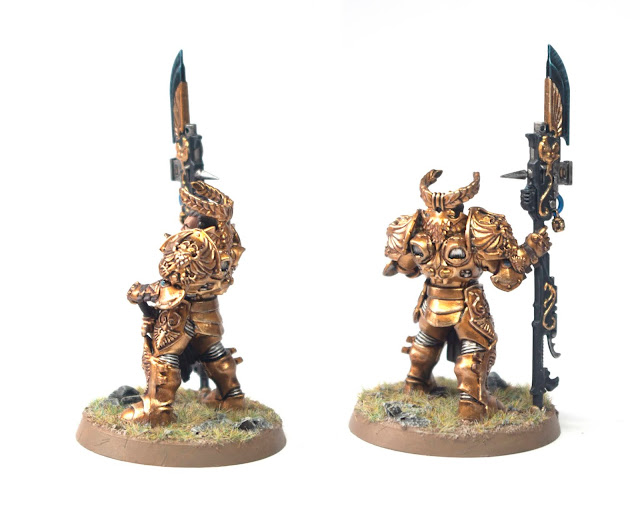 My long term plan is to have a little detachment where all my weirder croutons float (Sisters of Silence, Deathwatch, Inquisition) probably termed Talons of the Emperor. I'll be running Tybalt (yes I know he's Valarian, I'm coming to that) as a Shield Captain as that's one of the few ways of having a single Custodes legally running around and will also make him as nails as I think a Custodes should be. So why Valarian (see?) and not some other model? Well... to be honest he is the very first Custodes that doesn't look a smidge... derpy... to me. The others just weren't hitting my aesthetic. Then I saw Valarian and was like "yep, that's my guy". I didn't want to use him as a named special character though, so he's just a nice model that I thoroughly enjoyed working on. Didn't hurt that he came with a friend in the form of a nice Sister of Silence character to lead that contingent. Before I hand you back to the Charlie-face, I might as well talk about some of the painting while I'm here. Lets face it, there's only one game in town on this chap. Gold. 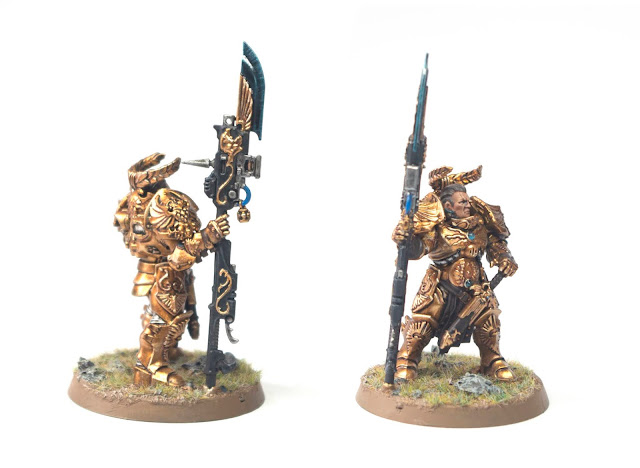 Everything I learned about gold painting came from an elderly Eavy Metal Masterclass article in White Dwarf. I started from a black undercoat (and with Tybalt's head on a paperclip separately, sod trying to reach past that to do all that collar detail). I then basecoated the whole model Mournfang Brown. Gold is a notoriously finicky pigment and doesn't like to coat black cleanly. A couple of thin coats of Army Painter Greedy Gold gave me the initial eye-searing bling. Time to make him not look like a kid's karate trophy. Shading was handled with layers of ink; ink lacks any medium, so it doesn't change the optical qualities of the paint beneath. I.E.: everything stays shiny. Brown ink was thinned with water and worked into all the recesses over a couple of thin passes. I then mixed some black in to the brown and outlined some of the plates to visually separate the elements of the mini. The final step was to use a very thinned purple ink wash (yes really, it's opposite to yellow on the colour wheel) to add some depth and richness to the gold shadows. I then started highlighting by adding increasing amounts of silver to the gold until the highest points were all but pure silver. Really fun process on a single mini. Hell on an army I'm sure!

Charlie: That Custodian, he dreamy.
To the other point, about having a themed force, I think for some people the word themed means "narrow." I take issue with a classic example of this: the idea that a Chaos army is only themed if everything's dedicated to one of the four Chaos gods. Just take a look at Jeff's pantheistic and insanely huge Graven Star Word Bearers project and tell me that army isn't a beautifully thematic army in which that pantheism is the whole point.
Jeff: Indeed I tried to make it look extra "Soup-ey" with all the different cultists, the beastmen and suchlike.
Charlie: That's the thing about the word "theme" - it's an extremely flexible word that people sometimes use quite narrowly in 40K. You could theme an Imperial army around the Imperium Nihilus, and model a rag-tag group of disparate Imperial forces visually unified by having battered or even improvised equipment. Imagine a squad of battered Assault Intercessors using improvised clubs after their chainswords have broken beyond repair, and then imagine them standing shoulder to shoulder with a squad of guard toting a medley of lasguns and autoguns they've salvaged from the enemy. Those units are tied together by a theme despite being from different armies.
Using a god, a colour, or a sub-faction as a "theme" is a great shorthand way of making something cohesive, but I'd argue it becomes redundant when you've got a consistent, underlying narrative behind the army. To make a turbo-pretentious comparison: in literary analysis the author normally starts out telling a story, and the reader picks out the themes. I like to think of armies the same way; I'll make up lore and stories about them, and if I do a good enough job, people will spot themes and consistencies - both visually and narratively - that tie it all together. The fact that 40K's current rules enable and encourage me to do that is fantastic, and I for one would like to see more of it - particularly with Chaos, who have the scope for some truly excellent mulligatawny goodness.