By Charlie May 10, 2021
I was fine with my long-serving plain grey urban board. Sure, it had absolutely no features or texture to it, but it was fine. But then I made the ruined chapel with a fully scenic base, and it served to emphasise how comically minimalist the board was. A big grey plain of meh. On top of that, in building said chapel, I'd really enjoyed working on the kit. The new Sanctum Administratus kit is very much in the same vein, and I started to have ideas... ones I couldn't ignore, as it turns out. I wanted more visual interest on the ground, I wanted large modular buildings, and I wanted a lot of primer spray. My wallet beheld my ambition, and it knew fear.
This is a big project, so to stop myself going insane I'm building it in smaller chunks, each of which is a finished piece of terrain that can immediately see use in-game. There are two elements to the project:
My plan is to document my progress here on the Beard Bunker so you can see the city grow, and learn from my mistakes along the way. At the end of the whole project, I'll be doing a full tutorial on the foamex stuff over on Goonhammer.com.

What is Foamex?
A PVC-based foam. The foam is quite dense, pretty light, and surprisingly strong.
Why would I want it?
Because it's easy to carve and cut through with a craft knife, so you don't need any power tools, and since it's PVC-based, it won't dissolve when you spray it with a rattle can. By using rocks and other objects, it's also easy to distress and weather the surface to look more battered if desired.
Are there downsides?
It'll blunt the bejesus out of your blade, so be ready to sharpen it and/or have spare blades at the ready. The primary downside is the sheer amount of work you're doing compared to a battlemat or a pre-moulded board. This will take a lot of time. Once I've finished this project I can be more precise than just "errr, hours." Personally, for me, the results are worth it, but then, I am a renowned nutter with a strange aesthetic aversion to 3d terrain sitting on 2d printed mats.
Where do I get it, and how much does it cost?
Foamex isn't the cheapest material, but compared to buying wood or whatever it's not hugely expensive. If you're in the UK, these guys will do you a 2'x2' board at 5mm thickness for £11. You want matte black board, since that'll look less naff if your paintwork gets chipped, and matte surfaces are that much easier for primer to stick to.
The results so far
I bought some A3 5mm thick Foamex sheets to do a little tester prior to buying the 2x2 squares. Here are some pictures of some of the finished test sections: 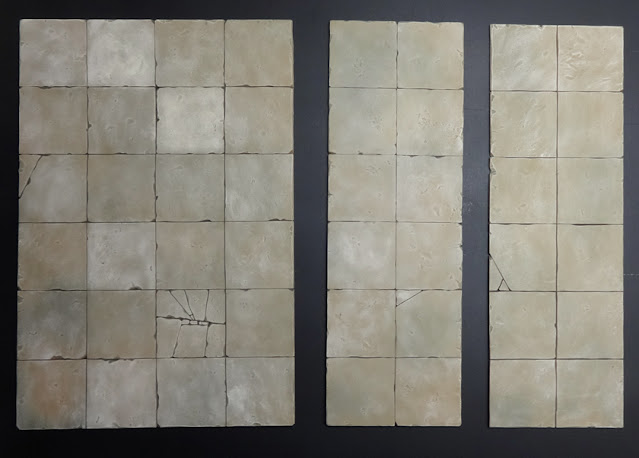 The grid that's been carved into the foamex creates panels the same size as the Sector Imperialis & Mechanicus floor sections. If you're hardcore you could do something similar for Zone Mortalis - it's a finer grid, though, so that'd be a lot more carving! This material is probably most suited to doing concrete-style flooring rather than metal, particularly where the interior foamex texture is exposed by your carving.

My extremely cunning plan here is to build a series of intact and ruined wall sections that are 4 panels wide and 2 panels deep, which then fit together to form 4x4 buildings. This way, I can mix and match between games, creating intact or ruined structures as needed. I'm only in the early stages of painting the examples below, so expect a lot more grime and tonal variation, but: 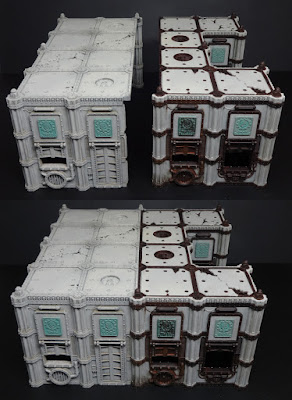 I've also assembled it such that if a U-shaped section is stacked on top of a rectangular section - using the corner lights as locating pegs - there are no doors halfway up a wall. 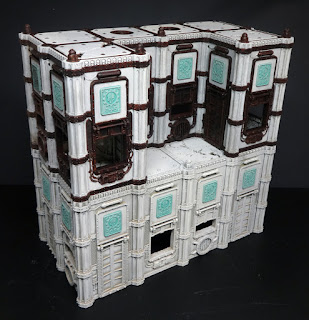 I'm trying to ensure this building looks lower status than the chapel, so rather than everything being pale verdigris and sandstone, it's whitewash and iron. Will it end up looking like trash? Time will tell! Here's a test panel I've done to near-completion, although I think I'll add more shading to the whitewash areas. 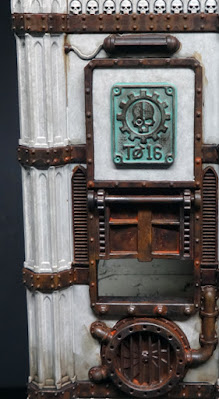 I'm still undecided on the interior, as to whether to have it all be painted over in the whitewash, or to have the same colouration on the inside as on the outside. Opinions welcome in the comments section. This is definitely a much more labour intensive colour scheme than the one I did on the chapel, so I guess we'll see if I manage to keep it up.
The idea is that the ruined sections will also be modular, and built to the same footprint as the intact sections... but that's for future posts. Time will tell if I manage to push on and complete this project, or whether I burn out. The results so far are promising, so hopefully I'll stick with it!