Judging a Codex By Its Cover(age)

By Charlie July 19, 2021
The impending release of Codex: Orks for 9th edition 40K is stirring the long-dormant bit of me that enjoys painting ramshackle vehicles, but it's not a foregone conclusion. If the new Codex is overpowered it'll dent my enthusiasm. As GW's Community team tease details from the new book, I find myself growing concerned. In today's short post, then, I'm going to talk about whether or not that concern is sensible, and what to do if we get a bad case of Codex power creep. 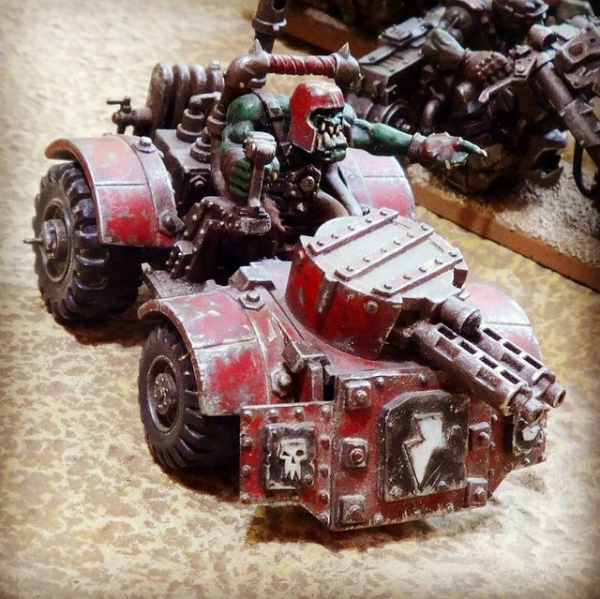 The first thing that really got my attention was the announcement that basic orks would henceforth be Toughness 5. Any seasoned player of 40K probably understands what a big difference that is. Suddenly, a Space Marine with a boltgun will have just as much a chance of causing a wound as a veteran Guardsman with a lasgun. From an immersion perspective, that feels off, and like it risks making basic workhorse units weirdly ineffective against massed infantry.
On the one hand, I tell myself not to worry. It's very easy to see these things shown off out of context on the Community site and start making inaccurate assumptions. I don't know how many points boyz now cost. I don't know if they're trying to reduce the number of minis an ork player needs for a viable army. I haven't used this codex in a game to see the actual practical difference it makes. Do I find it weird that a Space Marine is just as "deadly" as a guard sergeant against an ork in melee? Yes, very much so. Should this result in my flipping out that GW have "definitely ruined" my game of little plastic space men? Meh, the world has bigger problems than that.
It should be noted, though, that as the owner of the army in question, I don't want it to be better than other people's armies. I want them to enjoy fighting me. 40K's basic nature precludes the possibility of perfect game balance, but let's just look at some of the other rules we've been shown.
For instance, there's the new Ramshackle rule. Apparently "pretty much every Ork vehicle now counts as Ramshackle." 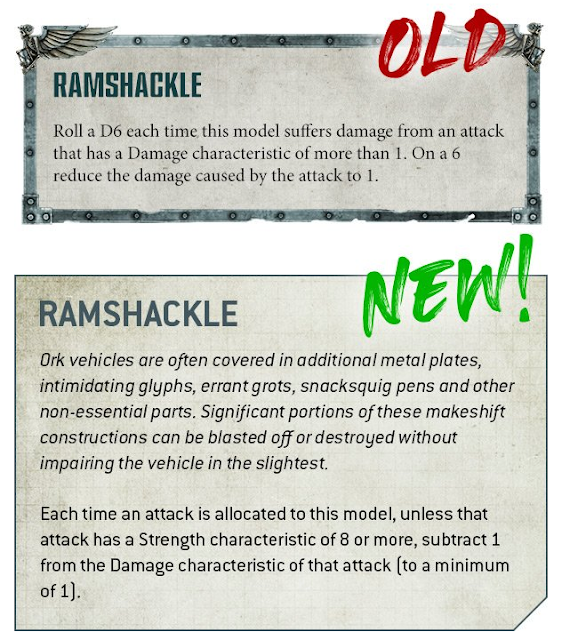 On the face of it, this is a nice improvement to playability in that it's taken a dice roll out of the equation and makes the rule 'relevant' as opposed to being 'that dice roll I usually forget about.' The downside, and it's a big one, is that light vehicles of the sort usually driven by orks should, in theory, be vulnerable to guns designed to deal with, you know, light vehicles. I would argue the humble autocannon ought to be the ideal weapon for this, but this new rule literally halves the damage output of that poor, neglected, mid-strength Damage 2 weapon. Again, on the face of it this seems like the game moving further away from how things are presented in the lore.
On the other hand, just how many S6-7 D2 guns are there? At this point it's kind of a niche, and if the overall theme they're going for is that orks are so meaty that they can weather all the punches, then I guess maybe this makes sense? It does, however, reduce the variety of weapons (and therefore units) that I'm likely to encounter as an ork player, but that's probably not the end of the world.
OK, so, let's imagine for a moment that the new book is in fact grossly overpowered. I hope it won't be, but for the sake of argument let's say that it is. As a primarily narrative player, what's the best remedial action for me to take?
I nerf myself, when I think about you
What could be Orkier than hitting yourself in the face with a nerf bat?* The great thing about nerfing onseself is that your opponent is unlikely to object. I'll definitely play some games with the book as-is, so I can get a sense of whether my opponent is in with a chance. If it's horrible to play against, I'll try and come up with changes. Drop the Toughness back down, alongside a conservative drop in points. That sort of thing.  My heart will go out to people in competitive groups where the rules are sacred, but personally I have no such limitation.
The other option that's open to me as a narrative Ork player is to play like the Speed Freak I am. For me, 'Da Plan' usually involves going as fast as possible, even when it's not the best idea, and generally doing dumb stuff unlikely to actually win me the game. So maybe, if the new book is broken AF, this means I'll still give my opponent an enjoyable challenge?
So long as I remember the ultimate objective of wargaming - to ensure, win or lose, that my opponent has a good time - it'll be fine. Winning too hard? Do something characterful yet counterproductive just for the hell of it. Losing? Who cares, Orks is never truly beaten. I might have my fears about the new book but I'm pretty sure fun is going to be had regardless, and if it really is buggered, I'll bust out the mek's toolz.
*Plenty of things, actually. Like doing exactly that, but driving a motorbike off a big ramp.