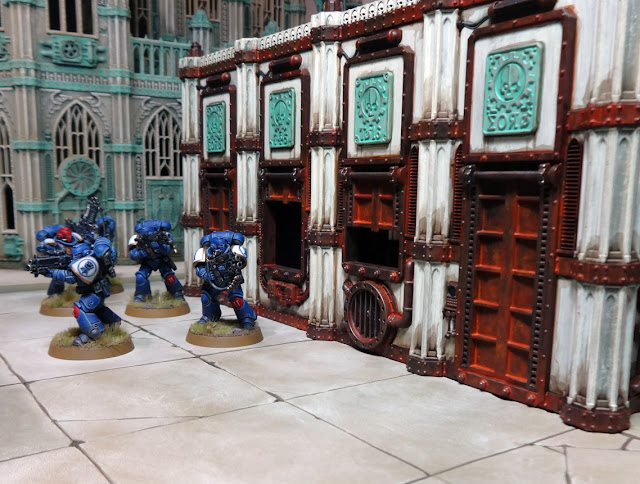 The the last log entry I was umming and erring about the colour scheme for the Sanctum Administratus. In this week's log, which should probably be titled "things I managed to do in between long stretches of Mass Effect: Legendary Edition," I've painted a second intact building segment. In and of itself that isn't exactly newsworthy, so I'll go the extra mile and provide the step-by-step paint recipes.
Am I 100% sold on this scheme? No. It simultaneously needs more and less detail, and by the measure of my usual terrain painting, it's not that quick either. So why am I giving you a recipe for it? Well, largely, in case there are individual elements of it that you like, and want to steal. 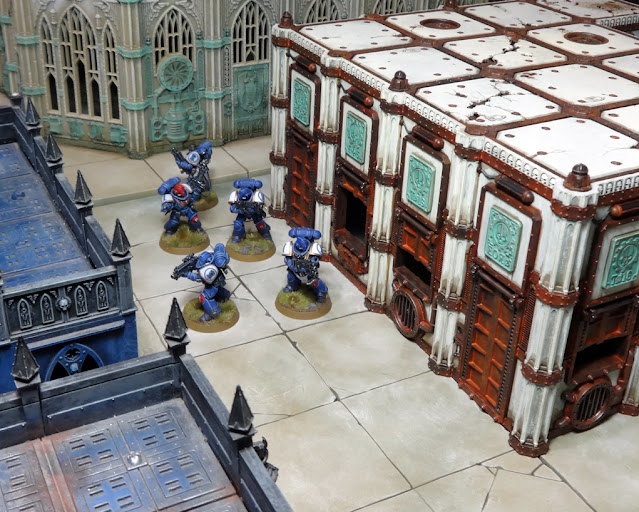 Rattle Cans
I spray primed with Mechanicus Standard Grey, then did a patchy semi-zenithal spray of Zandri Dust. This is going to get mostly hidden by the basecoat stage, but serves to provide some subliminal tonal variation that doesn't show up much in the photos and helps knock it off being a flat colour. TBH, though, you could just spray prime with Wraithbone and skip the basecoat stage if you were feeling lazy. The end result would look more plastic-y but you'd save time and money.
Sloppitty basecoat
The basecoat is actually a heavy, wet overbrush of a creamish whiteish emulsion paint. You could use any creamy off-white, and acrylic is probably your best bet since it'll be easier to work with, but it's just what I had to hand. Wraithbone might be a good shout, if you want a Citadel colour.
Verdigris
Nihilakh Oxide is slopped straight on over the cream colour for a very, very oxidised look. A drybrush of Warplock Bronze then goes over the top. 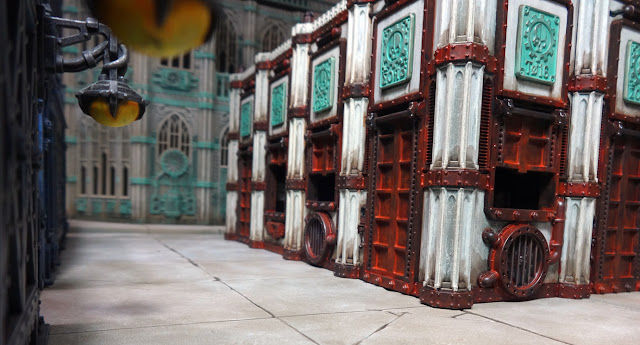 Rust
This is comfortably the most time consuming element.
Wiring & lights
I did these with Black Templar Contrast paint in a single layer. There's a strong argument for doing the lights switched on, but I was trying to speed up.
Add filth
I recess shaded the building with Agrax Earthshade. Don't apply this over the whole thing - you'll just get a muddy mess that pools in big flat areas of the walls. Apply it in recesses, and to show damp runoff and other crud. If you want a quick and easy method of fading, apply a thin film of water to an area with a damp brush, then blob the Agrax in the lower half of that area - you'll get a smoother fade. I alternated between that and harsher fades to try and imply layers of built up crud, but for the next building I'll probaby avoid the harsher tidal marks.
So there you have it! If you've painted your own version of this kit in a different scheme, please do link it in the comments section - I am permanently thirsty for ideas of how to paint the next batch of this stuff and could easily be swayed to doing something entirely different if I like the look of it. I'll end with a few parting shots: