The boys in blue and heretics in red have been doing far too much of the heavy lifting here of late.  It seemed time for some Necrons to show their faces.

There won't be the tips or guidance that Jeff or Charlie can offer, merely a showcase of (almost) all of my shiny metal boyz. 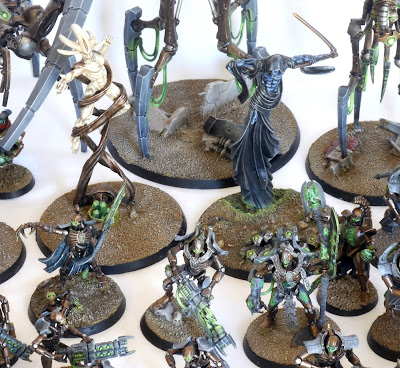 Leading my force are a bevvy of various nobles, front-right is my Overlord, centre his Warden, and front-left a supporting Lord.  There's also another Lord hiding on the right.  Behind them are the two shards of the C'Tan the Ikarrans once controlled and aim to recover (I've rebased them to match the Void Dragon I hope to get in the future, and had some fun trying to make the Nightbringer look like the very ground is recoiling from him as he passes). 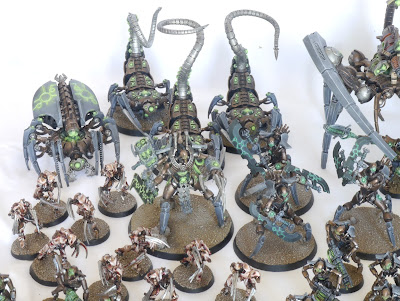 The final Lord in the army is the Skorpekh Lord and his destroyer minions.  New Indomitus additions, these have changed the way the Necrons play quite considerably, giving them far more punch in combat.  You can also see the Canoptek Spyder and my Wraiths behind these which I've converted to resemble scorpions to better fit with the insectile look of many other Canoptek units.
(To be perfectly honest, it was really because I just prefer the look - it was a relatively easy conversion, they were built almost as stock but with the bodies and legs upside down, all that really needed doing was to trim off sections of the tail that are flattened to attach to the bases when built normally.  In game, seeing as they could much more easily hide in this configuration, we like to say that as long as any part of the tail is visible the whole model is visible to be as fair as possible). 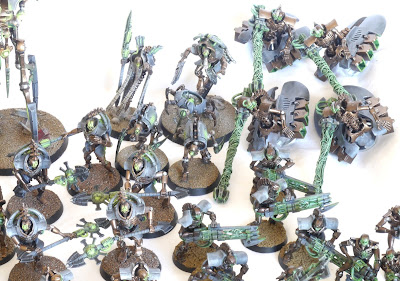 The other side of the Destroyer coin are these old school models who have the most extreme example of my need to replace the old green plastic rods on their guns, but you'll see it throughout the army and now I'm committed I can't really go back. 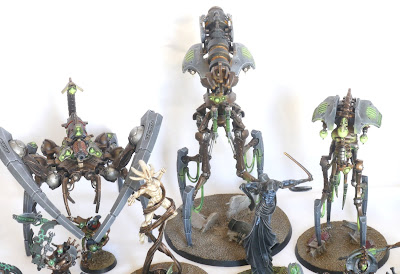 The last of the significant units are the new quadra-pod units - also known as Hooooonks in our little group (just look up War of the Worlds to understand).  I was shocked at how tall the Doomstalker is, I originally thought it would be the same size as the Reanimator.  The unit on the right is a Triarch Stalker - again I converted it to be more insectile, losing the Necron that is riding it, and with the gun riding on its back rather than underslung. 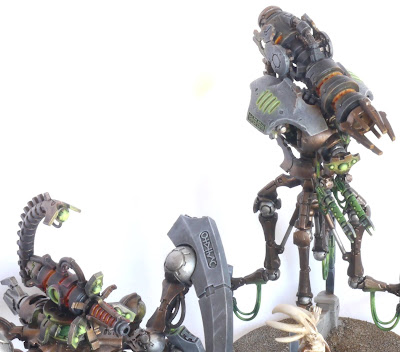 Here you can see the big guns being carried by these two units in a little more detail.

And finally, after all the teasing, here's the whole army (well almost) in a single shot.  Arrayed in front are the 40-50 Warriors, Immortals, Flayed Ones, and a few other units that I've collected over the years.
Although after packing all this up, I remembered that I also have 2 converted Ark models that can be arranged to be either a Ghost Ark or Doomsday Ark, and 3 Annihilation Barges from which the guns could be removed and a Lord placed on top to create Command Barges, so there's a little more to this in the end.
As for gaming, here in the East annexe of the Bunker, Tom and I have been playing a Crusade campaign as the Ikarrans awaken from their slumber and begin to rebuild their strength in and around the Pheraean Rift, and have been rudely interrupted by the Raven Guard.  After their first encounter with the forces of Chaos on Iaa-Q, they chose to focus their attention on the world now known as Xise Juan where their initial success has been somewhat stalled after the Raven Guard brought Eradicators, Blade Guard, and a Dreadnought to the party.  It will serve them well to do all they can to halt the Ikarrans as little do they know but buried at the heart of the storage-crypts of the tomb complex lies one of the Dynasty's C'Tan shards (presuming the restraining engrams have withstood the passage of 65 million years).
Cheers
Andy