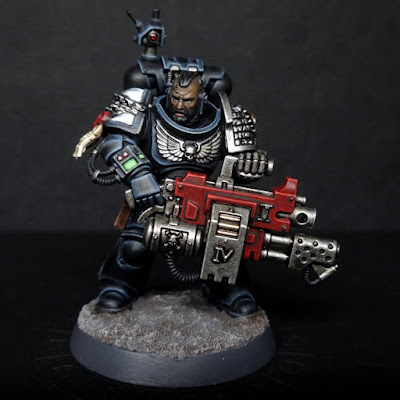 With our Deathwatch session coming up I've painted up another marine, this time for Jon (he's a keen gamer but isn't into the hobby side of things). He was built and painted according to Jon's choices, from the big honkin' Infernus heavy bolter to the choice of heraldry, face and skin tone.
Since every other player has made and painted their own guy, the paint styles across the squad vary hugely. As such, I took the opportunity to try painting the black armour in a different style to my own marine (featured last week). Today's post then is a sort of compare and contrast. I'm not sure that I prefer one or the other; apples and oranges, innit. That said, one is definitely faster. Or rather: less slow. Neither of these marines are of the "bang it out in an afternoon" variety. When you only have to paint two dudes it's a chance to put some extra love into it.
Let's start by explaining what the differences are in the black armour of the two minis, then I'll talk through the advantages and disadvantages of both methods.
One final note before we start: I used the same paint recipes on everything on these two minis except the blue-black armour. I went for a blue-black to help distinguish it from the rubber seal and cables.

This is the phrase I'll use to describe hammer dude's armour. Were it not for the edge highlight this would be a more realistic approach more common in historical modelling. The intention is to layer up brighter tones on the areas that would be hit by light from above. On the table, this has the effect of emphasising the shape of the mini and upping the visual contrast, but more subtly than the classic GW-style edge highlight. You can get a very similar effect very quickly using an airbrush; doing it with a brush just gives you a little more fine control at the (not inconsiderable) expense of time.
Starting from a basecoat of Corvus Black, I slowly layered up through Citadel's Dark Reaper, then Thunderhawk Blue. This means slowly mixing brighter shades into my mix on the palette and applying many thin, quick layers. I did this at the start of the paint job so that I could be messy and expressive rather than super rigid, going back and forth with lighter and darker colours until the transitions were smooth(ish), and where I wanted them.
Once those initial layers were down, I then smoothed things out by using glazes of extremely thin Corvus Black, then Army Painter's matte black where there would be shadows. I also used Black Templar Contrast paint to line in some of the recesses, since it flows so nicely.
Once this had been done, I applied an edge highlight of Fenrisian Grey and applied battle damage, again using Fenrisian Grey and matte black. On reflection I think the damage would've looked better done in Thunderhawk Blue, maybe with a little grey thrown in, as I think the contrast might be distractingly high here, but whatever.
To finish, I put a later of Vallejo matte medium over the whole thing to get a consistent level of reflectiveness. This really helps tie the thing together. You can use Citadel's Lahmian Medium for this, but I find it's glossier and makes the work look more, well, plastic-y.

Edging for the Emperor

This is the more classic GW style of highlighting all the edges. I started with a basecoat of the Army Painter's matte black, then went WAY TOO FAR with the highlights. I started with Dark Reaper (fine) then highlighted with Thunderhawk Blue (also fine) then went for a final sharp highlight of Fenrisian Grey (WOAH TWINKLES, COOL YOUR PARTY JETS). Fenrisian Grey works for me on the Zenithal Layering method because the overall colour is lighter, but against a black basecoat it's f%&£$ing neon. Like, Tron neon, but with less Jeff Bridges and more disappointment. Insanely, this is the highlight tone recommended over black by the Citadel Colour App.
Following this setback, I used thin glazes of Corvus Black and then matte black to knock it back down. As experienced painters know, highlighting up then glazing back down is a good way to build up smoother-looking highlights. In my case it was done out of necessity, but it was definitely a page out of the Bob Ross book of happy little accidents.
I did reintroduce some Fenrisian Grey afterwards, but only on the absolute sharpest points, generally as a dot highlight. Much better.
Finally, as with Mr Hammer, I finished with a layer of Vallejo matte medium to get a consistent level of reflectiveness across the black. Without layers of brightness painted on, you can see the reflections much more clearly in photos.

Sure it's subjective preference, but there's definitely some things to bear in mind here. I do like the slightly more realistic feel of layering, but whether or not you do it by hand or by airbrush, you have to be really careful not to make mistakes on the subsequent stages, since they'll be very hard to fix.
Pros of Zenithal layering:
Pros of Edging for the Emperor:

Black's a right bugger to get right, and I'm not quite there yet. I was never satisfied with the Deathwatch dudes I did a while ago. These newer dudes pop more, but I think maybe I went too dark on Mr Large Gun and too light on Mr Hammer. Your mileage may vary. Hit me with any strong reactions in the comments.