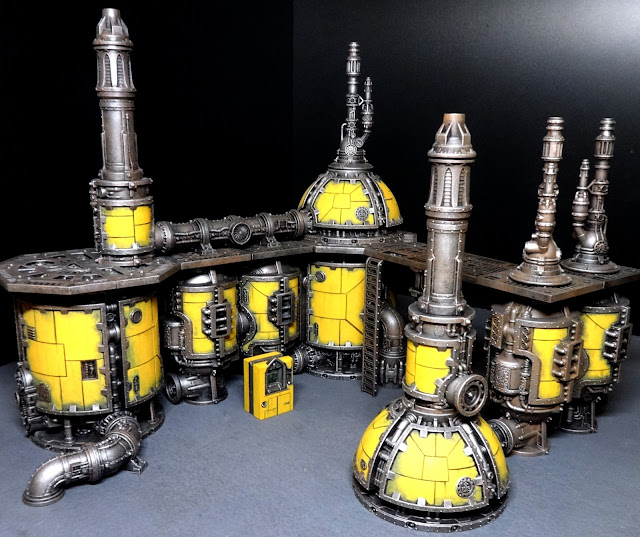 In my ongoing mission to spruce up my 40K urban terrain, I've tarted up my Sector Mechanicus buildings. Previously I'd just got them to a basic semi-rusty metal, claiming I'd come back and pretty them up.

That was in (checks notes, groans) July 2019. Tom recently started politely pointing this out, because he is my hobby wife. A brush almost immediately appeared in my hand.

I considered various colours, but ultimately yellow always felt pretty industrial to me, and gives a good bright contrast. Admittedly with the lighting in that first pic above it looks extremely bright, but it's not so intense in person. Or in the other photos, for which I'd reduced the aperture. 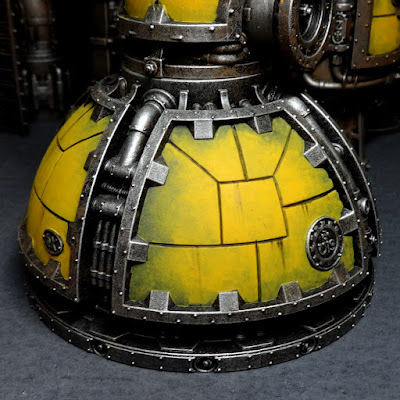 Anyway back to painting. My worry was speed. Yellow traditionally needs a few layers, and these things are large. Given the slightly rusty and oily look of the metal, I didn't want the panels to look too pristine, which they would do with just a flat coat of paint.
Instead, using a large flat brush, I liberally stippled Averland Sunset within the middle of the yellow areas. This had the effect of dumping a higher thickness of paint onto the area without leaving streaky brush marks. I wouldn't do this with an actual model - you'd fill in the surface details - but for a big flat area of terrain like this? Perfect. Very quick, too. Also means the edge of the stippled area fades out a little, preventing any harsh lines going in to the next step.
That next step involves a good-size brush (about a size 2 or 3 should do) and going around the unpainted edges with somewhat thinned Averland Sunset. You want to work quickly to get a single smooth layer without brush marks in it. Thanks to the transparency of the paint, it looks like you've done a grimy recess shade around the edges of the yellow section. You'll probably need to do this twice to get the right coverage, but with the paint having been thinned and with Averland Sunset having the coverage of the gods, this is surprisingly fast work.
Now for the finishing touches in this highly basic recipe. I applied Reaper's Brown Liner to the gaps between the panels to add some contrast. Next, to add the streaks, I applied sporadic dots at the lower edges of the horizontal panels and immediately smudged them downward using my finger. Would enamels and cotton buds and white spirit look better? Yes. Was my method insanely fast? Also yes. A word of warning: as soon as you put a dot on the surface, you need to wipe with your finger immediately. I can't emphasise that enough. Doing two or three dots right next to each other then smudging them is fine, but don't apply dots to the whole section and then try and smudge them; you'll get horrible tidal stains.
There's one other detail worth mentioning, which is the screen on the terminal. This was also quick and simple: matte black, then pure white for the writing, then a green glaze, then gloss varnish. Done. 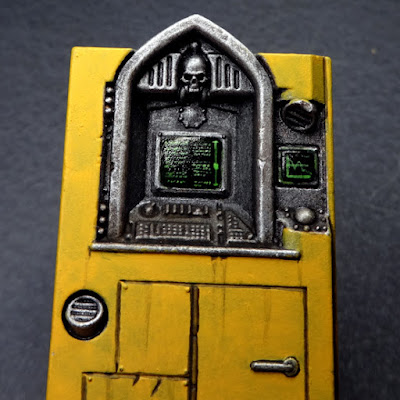 So that's that. For a driveby, two-evening process, I'm happy to have a basic result that immediately looks more lived in than it used to. I've seen people do some incredible and layered work on these kits around the web, but I don't have time for that. I needed results quickly so I can get back to the rest of the project.
Speaking of the rest of the project, I now have enough beige tiling to do a 4'x4' board even without using the big ol' chapel. I haven't blogged about it, since... well... there's only so much you can say about beige paving tiles. Rest assured there'll be more BEIGE in the future. 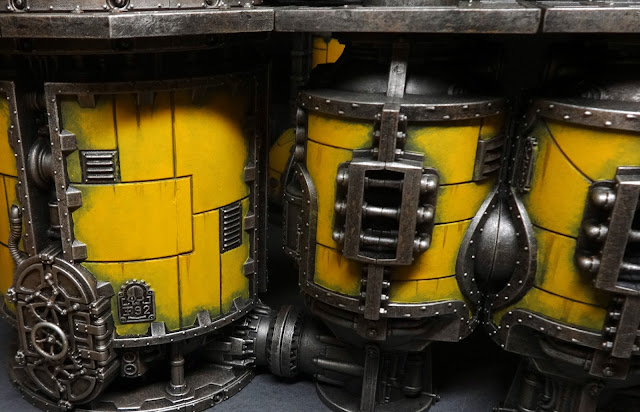