As previously promised I was going to get stuck into some 6mm fun with a Napoloenic starter set from Baccus6mm. It was a good set with rules, bases, scenery, and two opposing forces. Everything you need to get going. Seeing the figures for the first time in real life made it clear that the ‘normal’ 28mm styles of painting wasn’t going to work here. Something different would be required. So I went off a did my research. Many hours of videos, blogs, and pasting guides later, as well as actually getting stuck in and putting paint on the models, I’ve decided there are three important things to painting super tiny mens.

Knowing what you are painting in detail before you start really helps a) figuring out what you are looking at and b) what is the most important details to pick out. I’ve spent many an hour reading up and generally researching the uniforms of the period. it’s part of the fun for me, turning hobby into history and history into hobby.

French coats had red collars and cuffs but trying to pick out the collars would have made the faces and chests too messy, but picking out those cuffs suddenly transformed them into proper French infantry, as opposed to Portuguese infantry, who also wore blue coats but without the red cuffs. It’s those details that are important and are worth picking out. Also with the horses I picked out a few details in white such as socks and other white markings, a tiny touch but it adds a lot. 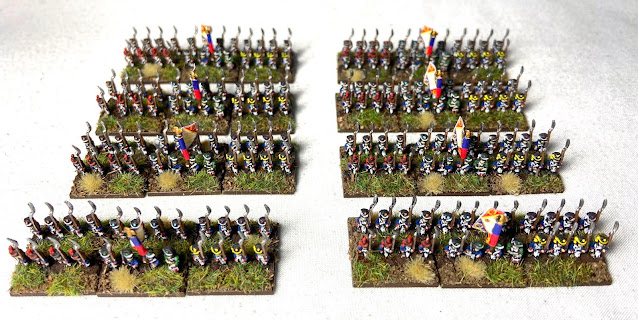 Only pick out what is most important. Lots of fiddly details get lost at this scale or makes it look too messy. Remember that you have literally hundreds of figures per side and once they are all clustered together those details won’t matter. Pick out the key bits and be a little more impressionistic. For example, on the figures chest I didn’t bother painting them blue then painting the white strapping. I just went straight to white. adding the blue would have been pointless as it reduces the contrast on the white and would have just made things muddier. Only the sleeves got picked out in blue at that is enough to give the impression of blue coats.

One of the reasons I did all the infantry in one batch was so I could see the massed effect coming together. Doing a single unit or two wouldn’t have given the same impression and I could have spent too long on each unit. Then it starts to feel like a much bigger and more daunting task than it needs to be. Plus doing 240 figures in a single batch is a new personal best (possibly even a new Bunker Record). 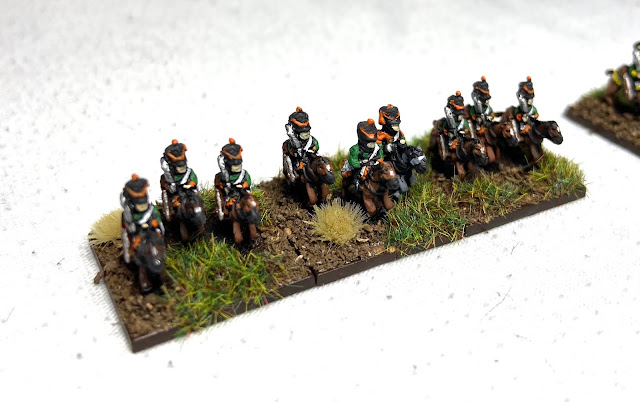 All of this applies to the painting as well as the basing. instead of the sand/seal/paint etc I went straight to a brown basing flock, then some 2mm static grass (as this was the shortest I could find), and some micro tufts. Which I think works well. 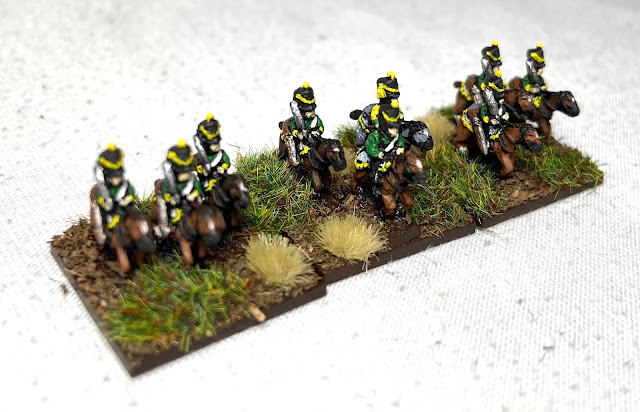 Don’t bother with layers. It gets lost and is pretty pointless. Just jumped to the highest colour from the undercoat to create a stark contrast. I started from black, which might seem strange for 6mm but i just meant that everything was already pre-shaded then did a solid coat of paint. Most of the time it wasn’t much more than a single dot of paint going on. The only time I did more than one layer was on the horses. The flanks and legs where large enough areas that it really helped the model to pop having two stages.

Also due to scale colour things need to be lighter than you think. Little things simply don’t reflect as much light back at you as a big surface so you need to make those colours about 15%/20% lighter than it should be. In reality French uniforms where a dark indigo however painting 6mm models that actual colour resulted in them looking so close to black that you might as well not bother painting them. So I lightened the blue to the point where it worked for the scale.

Hopefully this will help anyone out there who is thinking about going small scale regardless of which gaming system takes your fancy.

P.S. Just for fun, here is a size comparision between a 6mm stand, a 28mm stand from Perry Minitures, and a Rubric Marine, because I always have an agent of choas close to hand. 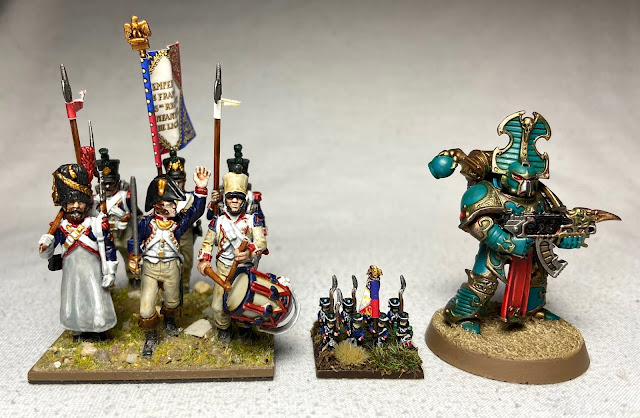