By Charlie November 29, 2022
I returned to the Old World in April this year, starting out on a new roleplaying wargame* campaign. Now that we've been at it one evening a week for 6 months, I thought I'd give a broad update on how it’s going, and share some of the minis I’ve painted up for it.
Jon and Drew are, respectively, playing a (drunken) Empire Captain and a bull-headed young Bright Wizard. Their characters, and the regiments they command, can gain or lose skills depending on how the story unfolds. The regiments can also grow or shrink in size, depending on recruitment rolls and battlefield casualties.
*Explainer: what's a roleplaying wargame?
Rather than a player versus player experience, a roleplaying wargame is when one player is the Game's Master (or GM), and the other player(s) function much like the players in any other roleplaying game, but where the conflict is resolved in battles rather than skirmishes. Players have their own characters, as well as a whole army to manage. The GM narrates the circumstances, and the players decide what their characters do in response.
That’s nice, but why no new posts for a month?
Ahem, yes. We do aim to post weekly, and have been pretty consistent in that regard for the last five years, but we do also take the view that if we have nothing to say, it’s better not to post at all. It’s just been a fallow hobby month for most of us. For me personally, I’ve been working on a lengthy piece for Goonhammer (11,000 words) that has seriously eaten into my hobby time. Hopefully worth it, and very much the sort of thing that you’re likely to enjoy if you read the Beard Bunker on the regular, so I’ll be sure to link it here when it’s out.

What's the context for Musket Bastards?

Not the most serious title, I grant you... but since this campaign is essentially Sharpe in the Old World, generous use of the word 'bastard' is mandatory. Jon's character is a semi-recovering alcoholic officer ordered to train up a new regiment of Hochland handgunners (happily, this means commanding troops in the deep green of the Rifles Regiment... did I mention it's borrowing extensively from Sharpe? Did I?).
Over the course of the campaign, as Jon's character has slowly earned the right to command multiple regiments, those regiments have started gaining and losing skills depending on the extent to which Jon and Drew keep them alive.
The story is set roughly in the pre-end times canon - so Archaon's invasion happened, and failed at the gates of Middenheim thanks to Valten, but as a result, much of the eastern Empire lies in ruins. Hochland was an impoverished state even before the Norse came, and now they've lost their capital to the Skaven, and half the state's towns are abandoned.

The story so far... in brief

The thing about roleplaying campaigns is that you lose what's great about them when you summarise them; the character interactions and the personalities are what bring it to life, but unless you're going to turn it into a well-written novel, roleplay has staggeringly strong 'you had to be there' energy.
In brief, then, Cornelius Leopold Albrecht, distant cousin of the elector count and noted drunkard, and Emery Amsel, recent graduate of the Bright College and a living embodiment of the phrase 'I'll take ye all on' have, so far:

It's a very simple system, and since it isn't PVP, I don't have to worry much about balance. It's also a very simple system. After a battle ends with >74% of a regiment on its feet, take a Leadership test for it. When taking this test, reduce the regiment’s Leadership by 1 for each bonus they already have. If they pass the test, they get to choose from a list of skills. Some are generic (+1 BS, WS or Ld) and some are specific to certain regiments.
As the regiment central to the story, the Schillings (the eponymous musketty bastards) have various options, like Three Rounds a Minute In Any Weather, which lets them move and shoot, or On My Wife's Grave, referencing the backstory of their ensign Markus Altmann, which I covered in the previous post. That one gives them the Stubborn special rule.
Fresh recruits
Regiments generally stay the same size, but the Schillings can try and expand every time they visit a town. Jon takes a Leadership test for their ensign Markus as he parades up and down with the regiment's macabre banner, trying to talk people into taking the Count's Coin. If he passes the test, he recruits a number of new soldiers equal to his margin of success, to a minimum of 1.

If  >75% of a regiment's members are taken out of play in a battle, the regiment loses one randomly determined upgrade. This represents new recruits lacking the expertise of the old hands.
Character losses
When a named soldier such as a unit champion, lord, hero or any member of the Schillings are taken out of play, roll a die to determine that character's fate, as outlined below.
Core units: 1-2 dead, 3-4 injured
Special/rare units: 1 dead, 2-3 injured
Note you do not need to roll for flagellants. They are always dead. If the cult was taken out of play, roll up a fresh cult using the cult-o-matic 9000.
Since the entire Schillings regiment consists of named soldiers, it's the only regiment that will literally shrink in size and lose skills when they take a drubbing. On the upside, as a ranged regiment, it's (comparatively) rare that they end up on the front line.

My love of maps is well documented at this point; mercifully I didn't need to go hog wild and make my own, since the Old World is so well documented. What I have done, however, is use Photoshop to stitch a bunch of existing maps together so as to get Hochland in context (with everything outside of Hochland faded out a bit). I then put it into a Google Drawing (click here to view the live map) so that we can have a bit of a user interface, with individual banners that can be moved around the map as Jon and Drew begin their re-conquest of Eastern Hochland. 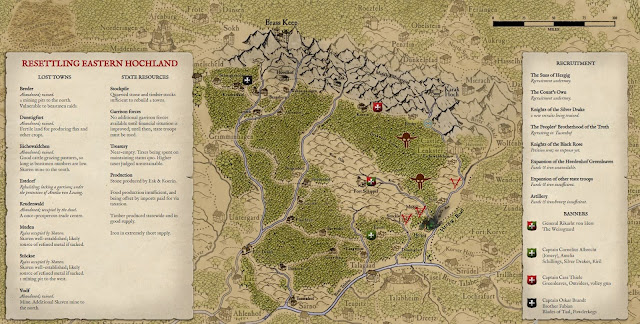 A major bonus of running this campaign is that it gives me an excuse to delve into my giant Cairn of Imperial Opportunity. This time it's only a modest delving; with Cornelius' promotion to captain, we needed a new marksman for the Schillings. Jon chose a Hochland long rifle for his replacement, since it seemed fitting. I had one already built and just gathering dust in the bitz box, so he got slapped on a base and painted up. The great thing about painting for mass effect is that you really don't have to worry about getting a high standard. To highlight that lack of high standard, here's a photo of the poor bastard on his own:
I also needed to expand the Inner Circle of the Order of the Silver Drakes, since there were only 8 of them. Not even enough for a rank bonus! So I expanded them up to a full 10. Since this is a unit of Inner Circle knights, each of them is unique and named, with their own responsibility within the Order. Obviously I had to maintain that with these newest additions, so I pulled out some Statueseque Minis heads I had lying around, pinned them in place, and sculpted collars to blend them in.
The only problem I had is that this army is so old that some of the paints I used just straight up don't exist any more. Mostly I could work around it, but you can really see the difference between the old base rim colour - Khemri Brown - and the newer Vallejo Earth. 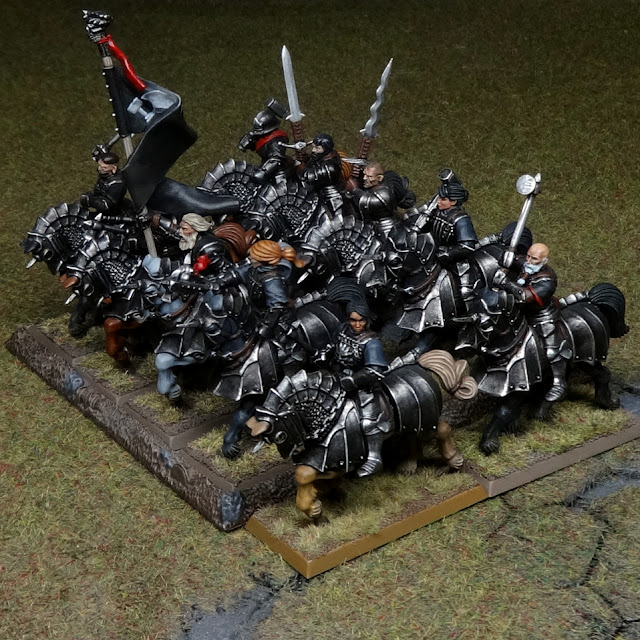 With opportunities for re-colonising bits of Hochland, I imagine this has encouraged people from further down the River Talabec, particularly in overcrowded Altdorf, to travel north in search of fresh starts. Since Altdorf itself would be far more diverse than Hochland, given that it's a major port where people could come from anywhere, this seemed like a good opportunity to use different skin tones.
Namrata's skin was an attempt at a medium-dark Indish skin tone. It was painted with a basecoat of Vallejo Beige Brown, then highlighted with a mix of Beige Brown and Citadel's Cadian Fleshtone, then finally with some Kislev Flesh added to the mix, before warming up the whole thing with a wash of Reikland Fleshshade.
It feels really good to have added to the Silver Drakes; I've been using them for over a decade now, and the regiment have a history to match it, with their original Grand Master having been slain in the original Hochland campaign (as referenced in this short story). The new Grand Master, Rosa von Kleinberg, was painted back in 2015. Back then, when I showcased the rest of the regiment as well, I stated my intention to gradually level her up from using Preceptor rules to being a proper Templar Grand Master... with this Musket Bastards campaign, it's finally happening! Every time she takes part in a battle, she upgrades a stat. Bit by bit, she's getting there.
Overall, it's joyful to get to go back to this army, and to do so in what is perhaps my favourite way: through roleplay. The opportunity to bring this huge cast of characters to life, and further deepen the lore of an army I've used and loved for so many years is great.