By Taal, it's like slipping on an old boot. I haven't painted an Empire mini in just over three years, and it was an absolute pleasure. I'm still painting orks for my own 40K army, of course, but I just started running a Fantasy roleplaying wargame campaign for Jon and Drew. Jon's not into painting, so he picked a mini - the old Forgeworld unit champion for the Nuln Ironsides - and I painted him, under strict instructions that said champion should be ginger AF. 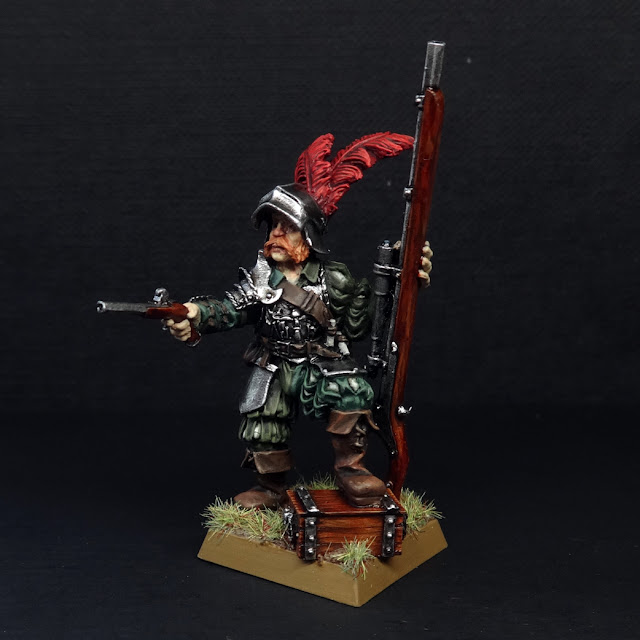 Where the BFG campaign I ran for him was like Hornblower in space, this is Sharpe in fantasy. Except that Sergeant Albrecht lacks Dick Sharpe's charm, and is in fact a sot. Will he clean up is act? Or drunkenly fail upward? Or die ignominiously? The future knows.
Along for the ride is Drew's wizard, just two weeks past her graduation from the Bright College and full of all the optimism of youth. In their first scrape, a policing action against a gaggle of goblins, she triggered the ambush too early, and then miscast. Strong start. (Great roleplaying by Drew, though, who knew it'd be bad, but also felt it was the in-character choice.)
Since I didn't go crazy with the painting, there's not much to say on that score. The incredibly macabre regimental banner did force me to come up with a backstory to the regiment, though. A baby-sized coffin with adult femurs? A child's skull in a bird box on the belt? You what?
Who are the Schillings?
Markus Altmann was one of a number of inexperienced soldiers who broke and fled from the battle of Krudenwald in 2522 during the Storm of Chaos. He might have saved his own life, but Imperial defeat left nothing to stop the Norse slaughtering his wife and two young children. Destroyed by grief, Altmann became a drunken vagrant roaming the streets of Bergsburg. Five years later, he finally decided to seek redemption. Fashioning a banner featuring the bones of his wife Heike, he made something he would never be prepared to abandon in battle, then set about recruiting some old friends who, like him, regretted their failure at Krudenwald. They reported to the Bergsburg barracks as volunteers, and Captain Thiele--impressed by their resolve--agreed to the founding of a new regiment to keep the men together. They called themselves the Schillings, referencing the coins needed to pay a priest of Morr to see to one's remains, since they'd all rather die than flee again. Wondering how long that resolve would last in the face of the enemy, Captain Thiele sent for a sergeant to train them properly.
Unfortunately, she got sent the notoriously drunk Sergeant Albrecht. With the limited resources available to her, she decided he'd have to do...
What's next?
I'll be going back to my orks, but I imagine running this little sideshow in Hochland will tragically necessitate the painting of some random fantasy minis from time to time. Oh no, what suffering.