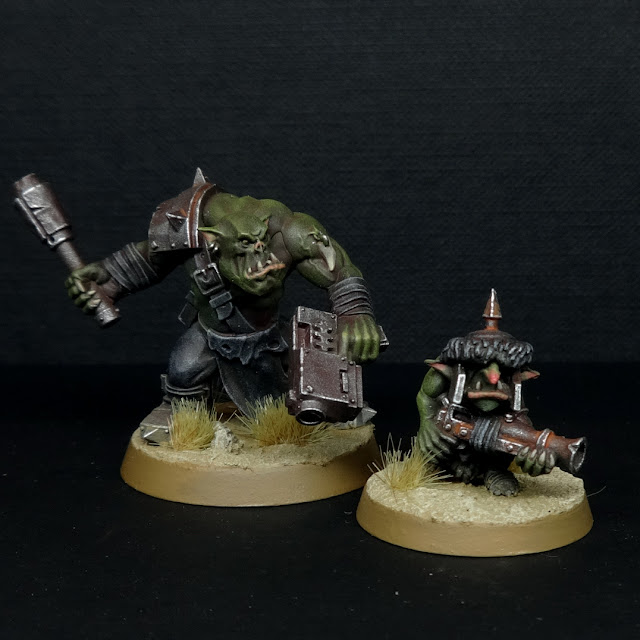 Sirrus Bizniz believes rok is for everyone, even grots, particularly if they're going to spend teef on rok merch. After all, that touring fleet isn't going to build itself.
40K crusade demands that I track individual units, but honestly I just see the grots as one amorphous pool of fangrots. Mr Bizniz mostly sees it the same way, but occasionally one grot or another might catch his attention for doing something uncommonly metil. Where most runts flee at the first sign of a loud noise, grots of kultur are instead drawn by the sound of rok. They become highly animated, headbanging and scampering about underfoot, although most avoid the orks' mosh pits. Some orks make fangrots feel unwelcome, claiming rok is proper musik for proper orks, whereas others are either indifferent or oddly charmed by the wee screeching loons. Either way, one thing is certain: having a small army of fangrots scrounging teef to buy rok merch has only swelled Mr Bizniz' coffers, and provided an ample supply of teknikal assistants for the Sound Meks.
Painting
This was in line with the standard method, with just a little more redness to the noses/lips, because grots. I'd forgotten how adorable these minis are; I hadn't painted any in years. I kept giggling while painting them.
I take this to be a sign of joy rather than faltering mental health.
Konversion wurk
I finally did the army's first proper kustom job... on a lowly grot. This particular grot has visited one of the merch booths and acquired some serious hair squigs and a lovely hat, all the better to welcome people to the junkle. To him, Mek City is Paradise City. He's so tiny! A sweet grot of mine to keep in the cabinet and cherish. I started by drilling through the top of his head and gluing a rod of paper clip wire in to serve as an armature, coating said wire in super glue to make it a more irregular surface so that the green stuff couldn't lose its grip and spin around the wire. Sculpting often happens in stages as you wait for the last bit to dry, but this was all done in one hit.
Initial games
I've now hit 500ish points. By my standards this is bloody quick, so I immediately celebrated by playing some games with them. The lads have mostly been wiped out in the first few turns, but Sirrus Bizniz turns out to be utterly nails. In one game he beefed a storm speeder, two intercessor squads, a techmarine, and some eliminators. Or in other words: the entire enemy army. Minus, err, about 3 or 4 marines who were killed by other stuff.
This may have resulted in some over-confidence when I faced the Eldar in the scattered wreckage of my own recently-borked spaceship...