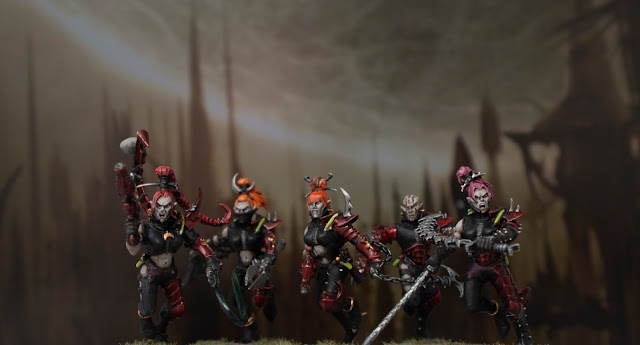 One of my favourite things about the Drukhari are the various different flavours contained within. The army structure is even tailored to encourage you to take maximum advantage of the three flavours with multiple small detachments encouraged (kinda like stabby neopolitan ice cream). The flavour we are exploring today is the Wych Cults of Comorragh, part mercenary, part performance gladiator acrobat, all stab happy nutcase.

My particular sub-flavour of Wych cult is a classic, the Cult of Strife. I tend to default to the sub-faction that feels most like the quintessence of that army unless I've got a strong reason to do otherwise (like wanting All The Raiders so going with Flayed Skull for the Kabbalites is the smart move). I'd also decided that I would change the colours of the army between the three flavours (Kabal, Wych Cult, Haemonculus cult) because it'll make it real easy to remember which one uses which rules: "Oh, a red one, that's Wyches". 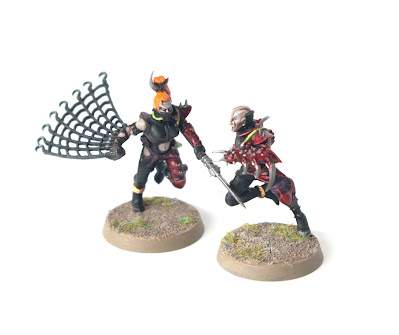 I knew I wanted all of the fancy Wych weapons on display as I love the notion that war is just another performance to them. In fact, in my head cannon they're being followed by tiny autonomous cameras recording their performance for subscribers back in the Dark City. This did mean a whole bunch of fiddly different painting tasks. So many, in fact, that this unit was a real struggle to complete. A wild change in tone from the Kaballites. 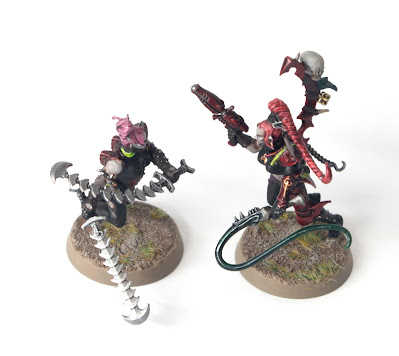 Speaking of tone, probably best to talk some painting! Firstly, the main colour: I've wanted to use Tamiya Clear Red for that bright candy red for the longest time. This was my chance. I painted it over high contrast steel colour just like the Kaballites and it gave the most wonderful arterial red. Very deliberately, the red was the only thing I changed from the Kaballites to the Wyches. By having all the other elements be exactly the same I'm hoping the units will hang together nicely as an army while maintaining their unique character. Oh, and a warning for aspiring Drukhari... that razorflail you see in the picture? None of that detail is present on the model, it's just a waggly plank. I had to paint all of the seperate bits of the stacked sections in freehand. Well worth it, just a bit of a pain in the bum. 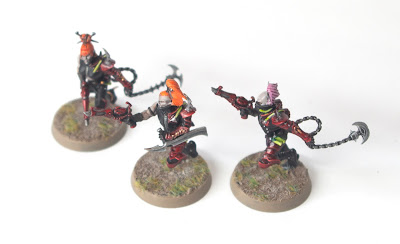 Another consideration was hair, I'm committed to the "no natural hair colours" in the army. Dark Eldar are powerfully cyberpunk and with their strange resurection thing they are in a very real way artificial beings. However, I've got to be a bit careful, I tried the same mix of shades as I had used for the Kaballites and it. Looked. Awful. I had to radically reduce the scope of the shades to just within the red spectrum, even yellow wasn't good. Colour theory can be a sod at times. 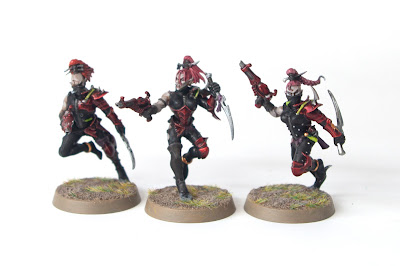 So it's probably time for some Lore for these chaps and chapesses eh? Why are the Cult of Strife invading Erudani? Well, the Archon of the army, the soon-to-be-met Kyraqir is something of a rogue and has made numerous promises to the Cult of Strife that he definately, definately cannot prove he can meet. Should this venture fail, well, it won't just be a Wych Cult that are after his still screaming, peeled form for a hood ornament.

The Wych element of the army is going to be quite small compared to the main show of the Kaballites. Just this squad, a Succubus, a bunch of jetbikes and some Hellions. Enough to have a viable detachment but absolutely a support force. The Haemonculi will be the same. But those are stories for another day, so as usual, lovely people, I shall bid you a fond