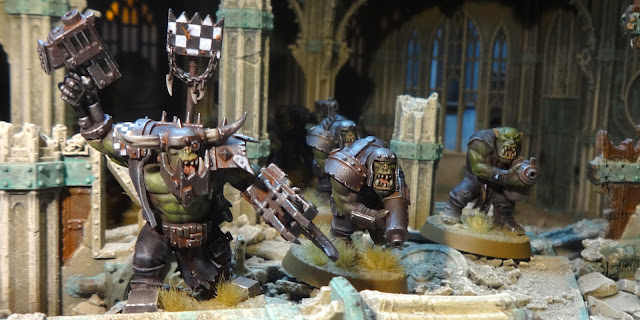 Sometimes a second album really is just refining the theme laid down by the debut effort. Similar riffs, but beefier; more assured. Such is the case with this second mob of idiots. While I'm sure there'll be further refinements, this post will outline the (generally simple) methods and colours used to paint them.
This scheme takes me about 60-90 minutes per ork, depending on the ork.
The Priming
This is absolutely key. I'm using TT Combat's Laser Cut Brown primer spray. It's available in a few places; I got mine from the dependable Firestorm Games. The first mob were painted with a black primer followed by an all-over basecoat of Vallejo Burnt Umber, which worked oh-kay, but on reflection the richer brown offered by the Laser Cut Brown spray (similar to Citadel's Rhinox Hide, I think?) works better.
Why is the primer so important? Because almost the whole paint job is done with drybrushing, and that primer colour is meant to show through, providing a dirty, earthy look. Not that this is all too obvious from the photos, natch. Shrugs apologetically.
The method: don't worry about precision, don't worry about overspill, never go back.
Seriously, there's a lot of drybrushing here. I'm using a small makeup brush for most of it. Getting some of each stage on other parts of the model is unavoidable, but I don't go back and fix mistakes since subsequent stages just go over the top and (mostly) fix it, or make it hard to spot.
The order I've given below plays into the idea of being messy: it's carefully chosen to go in descending order of messiness, with one stage fixing the last, and the highlights also let you trick the eye into not seeing screw ups.
The Stages
By my standards this scheme uses a small number of paints. Should I have taken step-by-step photos? Yes. Did I plan to do so? Yes. Did I? No. The key thing is that there's a lot of steps, but most of them are quick.
Komparing mobs 1 & 2
The brown primer and the rusty line-in are the two things I changed for this second batch. You can see the newer lads on the top row in the image above. For added utility I've made a point of lining up some of the repeated minis. You'll probably spot that I made one or two ultimately futile attempts to create variety; on the far left you can see, for example, I removed the cartridges on the gun, the scars on his back, and the skull on his belt. It's still extremely clearly a repeat, since the overall silhouette is unavoidable.
What's next?
Da boss.