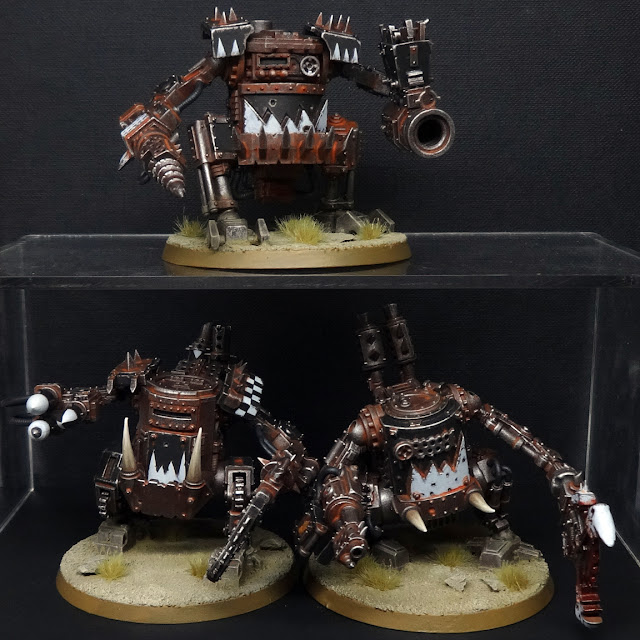 The clanking three-piece outfit Grötley Crüe got their start in Runt Hill. It's just out past Skid Row, where the speed freaks test their dragstas. There at the periphery of Mek City, on a dusty hill too rubbish for proper orks to bother living on, the grots roam free. It's undoubtedly the least impressive neighbourhood on Boff's Rok, and yet it's the hometown of a truly unusual little grot.
Nikkit Stixx was originally an oiler working for Krom Bignooz, but after one too many unfair slappings he scampered off for the hungry freedom of the outskirts. Somehow surviving the journey out of Mek Town, he took to salvaging parts from the wrecked dragstas littering Skid Row.
He could never quite replicate Krom's ability to create actual working machines; nothing ever seemed to come together right. Frustrated, he took to drowning his disappointment with shroomgrog. He was soon hopelessly hooked, and didn't care. His little workshop fell into disrepair.
One night, blasted out of his wits and frustrated at his lot in life, he staggered back to Skid Row to half-heartedly pick at another wreck. He'd drunk far more than usual, and started to black out while tugging at a dragsta's battery. As the toxins tugged the life from his skinny little body, he slumped forward... and touched the bits of the battery all oilers know not to touch.
With a flash and a zap, Nikkit Stixx kickstarted his own heart.
His eyes opened wide. Veins bulged. His chest hammered away, and his chemical-filled brain entered some new fevered state. Filled with the clarity of the true psychochemical cosmonaut, he feverishly disconnected the battery and took it back to his workshop. All through the night he cut, and welded, and connected gubbins. As dawn broke over Grot Hill he was still going, and still taking swigs of shroomgrog. Other grots dropped by to see what all the noise was. Some even started helping.
A week later an engine started in Grot Hill, and a reedy cheer went up. Nikkit Stixx took his first clanking step inside his new suit. His new... killa kan. Every few minutes, he slapped the big yellow button to give himself a mild electric shock. It helped him think. And what he thought was that his new body could do more salvaging.
A lot more.
A month later, Nikkit - now known as Doc Feelgood on account of his chemical proclivities - had some kanned-up mates. At first, the other denizens of Grot Hill were extremely pleased to have some muscle defending their neighbourhood. Soon, however, Doc Feelgood's drunken behaviour and tendency to accidentally trash everything while wearing the suit meant he'd outstayed his welcome.
He and the rest of the Grötley Crüe set off in search of more fun. Said fun went on for months, and is a story for another time, but the important thing is that the trio developed a taste for Goff Rokk after happening upon the Bloodstikk Festival. While many disapproved of grots with so much agency, the festival's manager Sirrus Bizniz declared that self-made kans were "da metellest fing I seen today." After that they became a regular fixture of the mosh pits, providing great amusement as everyone tried to flee out of their way while they careened through the crowd during gigs. Feeling that they livened things up, Mr Bizniz took them along when he set out on his interstellar Rokk Tour.

These wee robots are actually a rescue, or redo, or whathaveyou. The original paint job:

I took a stab at tarting up the original painting, but ultimately it proved faster to just re-spray and start from scratch. This followed the usual painting method I've already outlined, but with a higher amount of rust. I think the orange adds visual interest in the absence of green skin.
One other thing I did a little differently was the silver highlight. Normally I'd do this conventionally, but with the sheer number of edges on an ork vehicle I took the view that I'd be even older and greyer before I finished such madness. Instead, I elected to hit the main edges with a drybrush of Vallejo Steel, and that stuff is so bright it actually kinda worked. Not as well as a highlight, but well enough that I was willing to settle.

Ten gretchin will get me to a 500 point patrol, so that seems like the move.